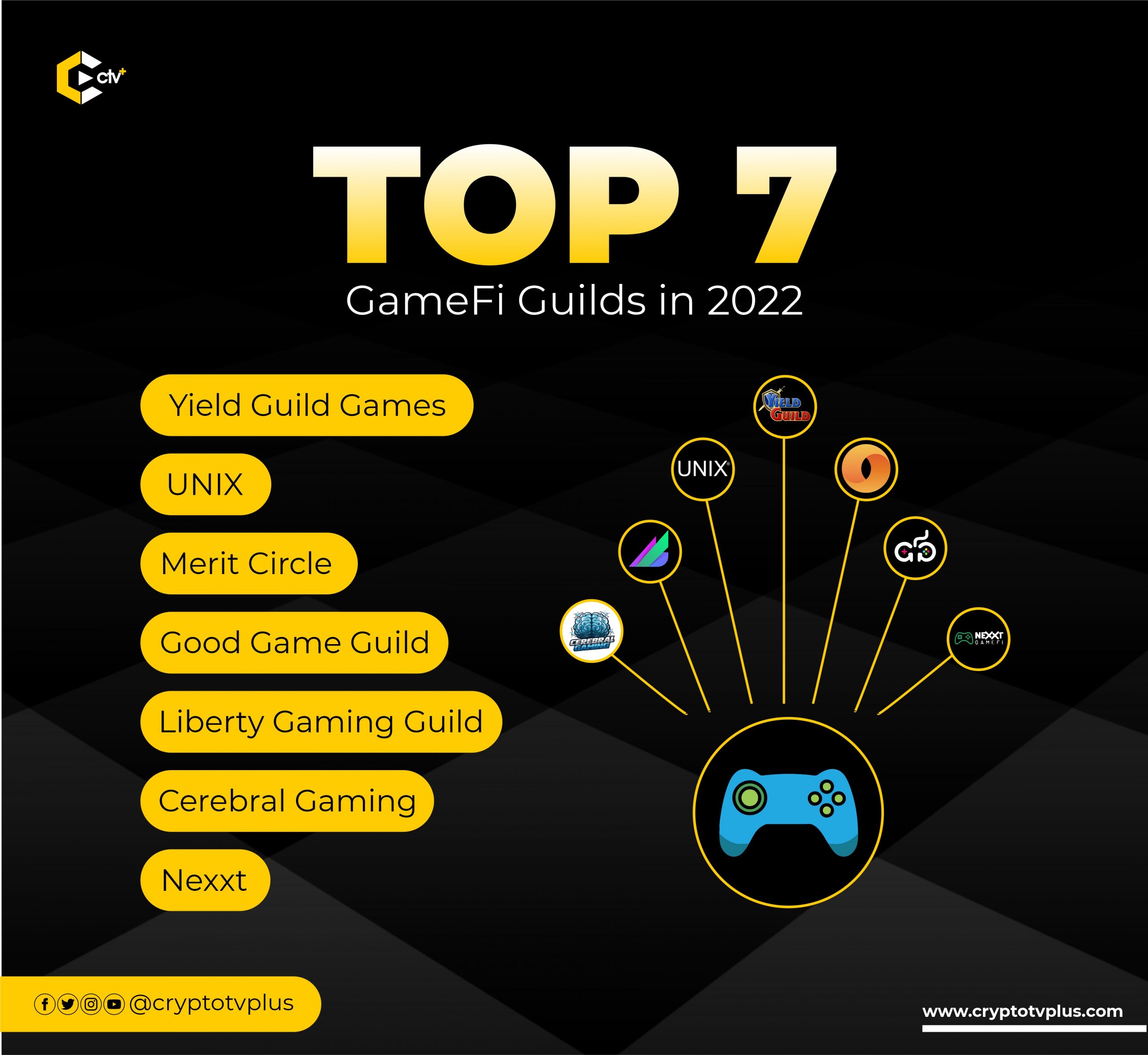 GameFi, in contemporary times, has been riding high. With in-game rewards incentivizing players and enabling many to meet living expenses, a new model had been born.

Much like their traditional counterparts, GameFi guilds are an organized group of gamers that often work together in-game to complete missions. Though, whereas traditional guilds solely served as a community, GameFi guilds connect in-game asset owners with P2E gamers. Revenues are shared among members, with players taking the majority of profits.

In this article, we have reviewed and brought to you the top 7 guilds in the Gamefi space in 2022.

Yield Guild Games (YGG) is unarguably the largest guild with a $260,112,409 market cap at press time. The guild was founded in 2020 by Gabby Dixon, who is a veteran gamer and Axie Infinity player.

YGG operates as a Decentralized Autonomous Organization (DAO). As the pioneer of crypto gaming guilds, YGG has adopted the name “Guild of Guilds” as it comprises almost all of the other popular gaming guilds in the space. YGG has raised a total of $28.4M in funding over 5 rounds as of Jan 2022. Some of their big name investors include Animoca Brands and BlockTower Capital. $YGG is the native token of Yield Guild Games which is backed by the guild’s assets, it is an ERC-20 token they use for governance.

UniX started as a simple gaming guild but is already becoming one of the biggest hubs in the P2E gaming space. UniX Gaming’s guild sets out to identify the most promising video games players and equip them with everything they need to succeed in the highly competitive world of NFT gaming. Not only does it provide training and educational content. The best players are offered full scholarships, enabling them to borrow the NFTs required to access the best known P2E games and start winning real-life rewards that they share with the guild.

UniX has already expanded in numerous ways. Earlier this year it launched an official Launchpad, providing developers of P2E games a way to secure funding, in return for early access for its members. UniX has also partnered with The Sandbox, one of the world’s leading metaverse platforms, buying up virtual real estate that it intends to develop and just last week it embarked on an ecosystem expansion with the launch of its official video game development studio. The newly launched UniX Gaming Studios is already working on bringing the guild’s first ever play-to-earn video game to life. $UNIX is the UniX’s governance token for the Decentralized Autonomous Organization (DAO) and allows holders of the token to have a say in UniX’s future. Through UniX’s token ecosystem, players get in-game rewards for their skills and online activity.

Merit Circle is governed by a DAO. Their most prominent partnership is with Axie Infinity, although there are plans to work with Illuvium, Hash Rush, and Star Atlas. The project launched in November 2021, but it has been in development since July 2021. It already has a massive community despite its young age, with around 97k followers on Twitter.

Merit Circle currently has over 2,700 scholars; they keep 30% of the profit from everything the gamers earn using the in-game assets they lend out, while the gamers can keep the 70%. Merit Circle has raised $4.5M from investors in the seed round in Oct 2021. Some of the investors include DeFiance Capital, Mechanism Capital, and Spartan Group, to name a few. $MC is the native token of Merit Circle with a total supply of 1 billion tokens.

Good Games Guild is a relatively new gaming guild. It recently has over 300 scholars and around 119k followers on Twitter. Good Games Labs acts as their investment arm and game incubator. Good Games Guild has a DAO for management and governance, and they earn 20% of all the revenue generated from the guild. Good Games Guild closed its Seed fundraising round in Oct 2021 collecting $1.7 million from a list of notable investors, including Animoca Brands, Illuvium, OKEx Blockdream Ventures, to name a few. Good Games Guild has $GGG as its native token, with a maximum supply of 100 million tokens. However, they have an unknown circulating supply and current market value. The current market cap of $GGG is sitting at $1.9M.

Liberty Gaming Guild (LGG) was launched in November 2021, it is an ambitious next-generation project that is investing in a host of top play-to-earn games to increase its crypto and NFT portfolios. LIBERTY is a barrier breaking project and the ‘gateway’ for gamers to gain access to previously expensive & inaccessible NFTs within blockchain gaming, as well as providing an ecosystem for them to learn and thrive within the new gaming era. The Liberty team has education, training courses, support and guidance available over a wide range of areas. From training in all things blockchain, crypto, DeFi and CeFi, to everyday money management and investing guidance, and much, much more.

On the 18th of February, 2022, LGG announced a partnership with Persib Bandung, a leading Indonesian football club with over five million fans across South East Asia (SEA). Persib Bandung will market LGG’s success in the metaverse, where they have successfully eased access to the otherwise inaccessible, complex, and relatively expensive NFT landscape. In return, the development will see the football club’s broad fan base get exposed to exciting opportunities on how they can take charge of their finances through able and powerful blockchain-based solutions.

This is a new gaming guild built on the HarmonyOne blockchain. It takes a decentralized approach to investing in GameFi projects.  The ultimate goal of the DAO is to invest in as many startups as possible, provide support for new gaming experiences and increase ROI for investors. CGD purchases lots of land, character NFTs, tokens, LPs on DEXes and produces guilds for game sharing.

Cerebral Gaming recently announced a collaboration with Kuro Shiba and announced that they will be launching their governance token there through staking a collection of Founders Badge NFTs that will be available for mint on their website. Their other partners include Crypto Clay and HarmonyUniverse. They already raised 100k $ONE tokens in funding and have the potential to reach YGG levels.

Nexxt is a budding gaming guild that is becoming quite marketable. It is one of the gateways to the play-and-earn space and it provides opportunities for all levels. Nexxt GameFi invests in GameFi projects that give the best balance of fun and profitability. They give early access to the newest NFT & crypto games and allow users help with testing new games and win prizes. Some of their partners include Time Raiders, Pegaxy, Chibi Dinos, Axes Metaverse, Nomad Exiles, Gunzilla Games and Qudo.

What do you think of the article? Let’s hear from you in the comment section!

Queen Amina of Zaria Comes to the Metaverse in Minaland