Recent findings in the Report on NFTs by Bybit and Nansen reveal that despite notable growth in 2021, the NFT space seems to be slowly losing momentum.

According to the report, wider NFT indices are down by 26.2% and 16.7%, respectively. While ETH price declined by almost 66% YTD., the report suggests that while the NFT indices are generally bearish, they hold their own against The Ether, showing that both indices outperformed The Ether TY==YTO. However, the USD value of both indices had decreased by 74.9% and 71.7%. Therefore, NFTs underperformed against Ethereum from this perspective. 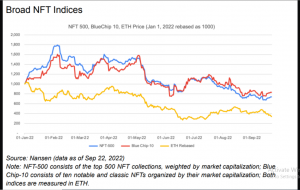 Comparing both NFT indices to BTC, while BTC continues to see a steady decline in value, the 2 indices gained on Ether. In addition, various NFT collections like  BAYC, MAYC, DigiDaigaku, and CryptoNinjaPartners saw their floor prices increase during this period. 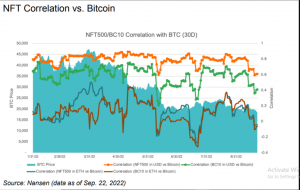 Concerning games, game-related NFTs are underperforming when compared to  Social/Metaverse/Art NFTs, as new projects run out of high volume streaks rather quickly. The report reveals that the market focuses on socially oriented NFTs rather than art, as they give more satisfactory TYD performance.

Solana in the lead

Bybit and Nansen report that while Solana and Ethereum battle for NFT supremacy, Solana seems to be in the lead–but barely. The report shows that Solana’s increasing momentum has passed, even though it remains noticeable. However, Ethereum’s volume momentum has been on a steady decline. Factors like the zero-loyalty projects (affected by Sudoswap) may be a factor in this outcome. 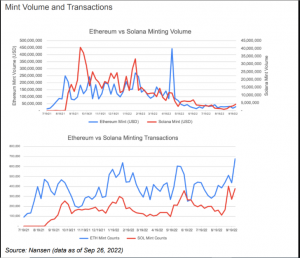 Despite Solana’s building momentum, Ethereum holds the industry in minting transactions. Although the minting volume is almost split in the middle, new projects hoisted on Solana seem to be driving up sales volume compared to Ethereum. The report reveals this trend began in August 2022 and continued throughout September. 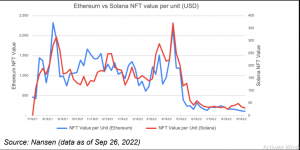 Generally, Solana now boasts more NFT users than Ethereum. Although the USD value -per unit value on both networks are almost the same level, the USD value has seen a downturn since early 2022. Averages are now around the $30 mark, which makes NFTs more affordable.