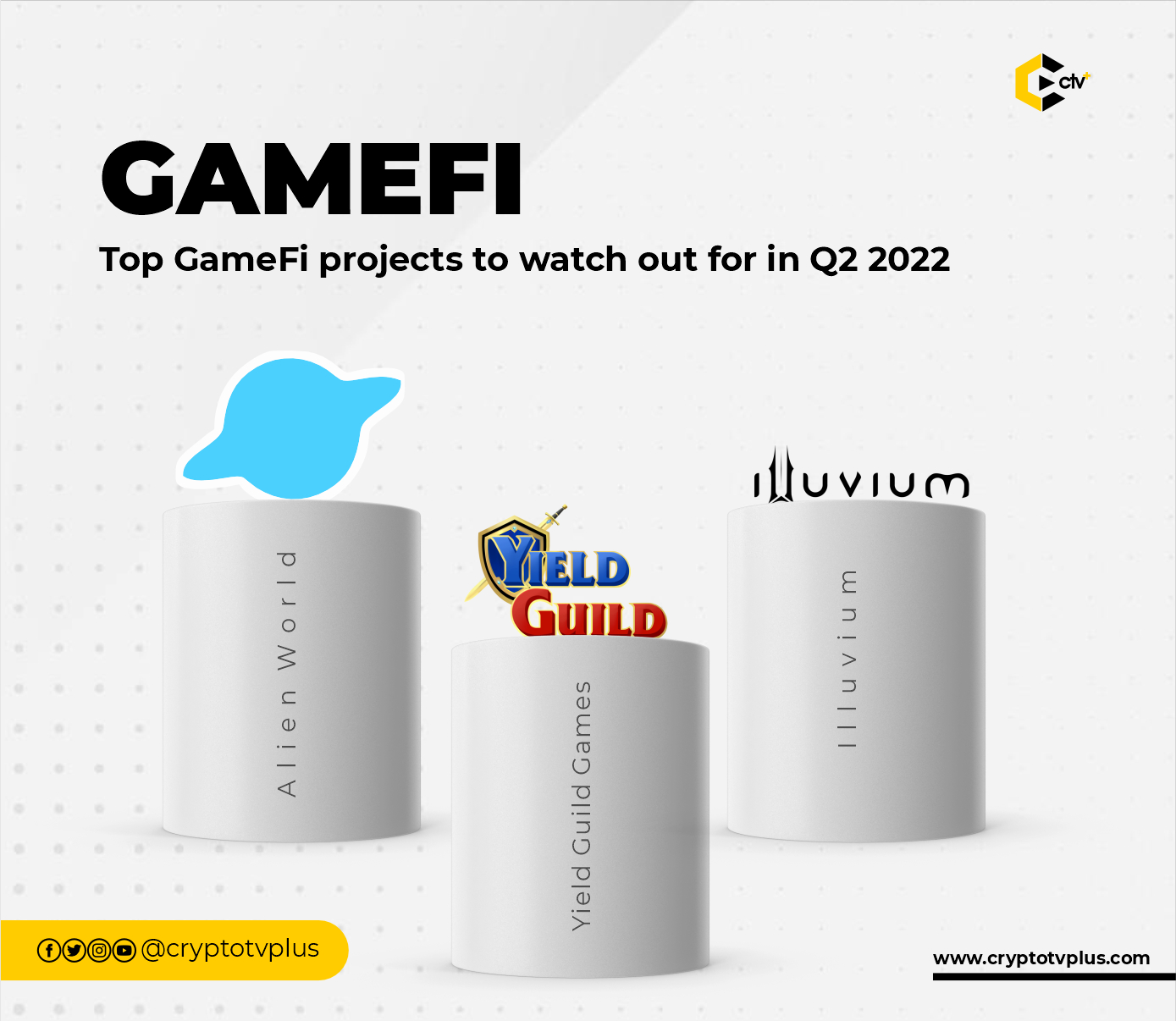 Game Finance(GameFi) projects have gone mainstream over the past year. Projects like Axie Infinity, Decentraland, Sandbox and so on have become a vital feature of the metaverse.

According to a DappRadar Report published on April 20, user activity on play-to-earn platforms has jumped by 2,000% year-over-year. Q1 2022 has seen usage and investments in blockchain gaming accounting for 52% of all blockchain activity. There were 1.22 million new unique active wallets (UAW) in March 2022 alone. As regards funding, the blockchain gaming sector raised $2.5 billion in Q1 2022, 150% up from Q1 2021.

With that data, GameFi projects are becoming lucrative businesses amid the buzz and hype around NFTs and metaverse, bringing in millions of players and investors. Going forward in Q2 2022, below are the top GameFi projects to keep an eye on in the coming months.

The first on our list is Alien Worlds. It is a sci-fi adventure game revolving around a metaverse with NFT alien species. Launched in December 2020, it is arguably the world’s most popular GameFi project at the moment.

According to data from DappRadar, it has had a 66.08% surge in users, 18.82% increase in transactions and 26.91% rally in volume in the last 30 days. At the moment, it is ranked #3 in general and #2 in games, thereby cementing its place as a top GameFi project with enormous potential.

A top move it made this April was with MineCraft – the best-selling video game of all time that has over 170 million players worldwide. Minecraft will soon host a portion of the Alien Worlds metaverse. A sort of Alien Worlds – Minecraft bridge that will allow players to earn Trilium($TLM), the native cryptocurrency in Alien Worlds.

Participants, analysts and observers expect that this new interoperability bridge between the traditional and blockchain gaming worlds will bring non-blockchain gamers onto the Alien Worlds metaverse which will in turn give Alien Worlds a major boost. Keep an eye on it.

Yield Guild Games(YGG) is a decentralized autonomous organization (DAO) that was launched  in July 2021.

It has varieties of distinctive features. It invests in NFT assets and connects blockchain gamers worldwide. The guild generates revenue by renting/selling YGG-owned NFT assets. The platform also introduces yield farming to game economies while adding value to virtual worlds.

$YGG is the native cryptocurrency that powers the Yield Guild Games platform. The digital asset hit an all-time high of $11.50 in November 2021 but is down 78.55% from its apex at press time.

However, the project has made some groundbreaking collaborations in recent times. It has partnered with Civitas, MetalCore, Zom(Illuvium’s Lead Game Ambassador) and Nitro League in the past one month. The next few months look great.

The last on our list is Illuvium. It is an open-world fantasy role-playing metaverse created on the Ethereum Blockchain. It is set to fully launch in Q2 2022.

Illuvium is expected to be in 3D with an open world.

If the game lives up to its hype, it could also be one of the rare play-to-earn games that connect with traditional gamers.

The P2E enables players to earn $ILV rewards for winning contests and tournaments. $ILV hit an ATH of $1,925 in November 2021 but is down 70% since then.

However, Illuvium promises to be an interesting project. It has appeared on lists of the most anticipated games of the year. Hopefully it lives up to the hype.

What do you think of this article? Let’s hear from you in the comment box

High GameFi tasks to be careful for in Q2 2022 - topcoins.io