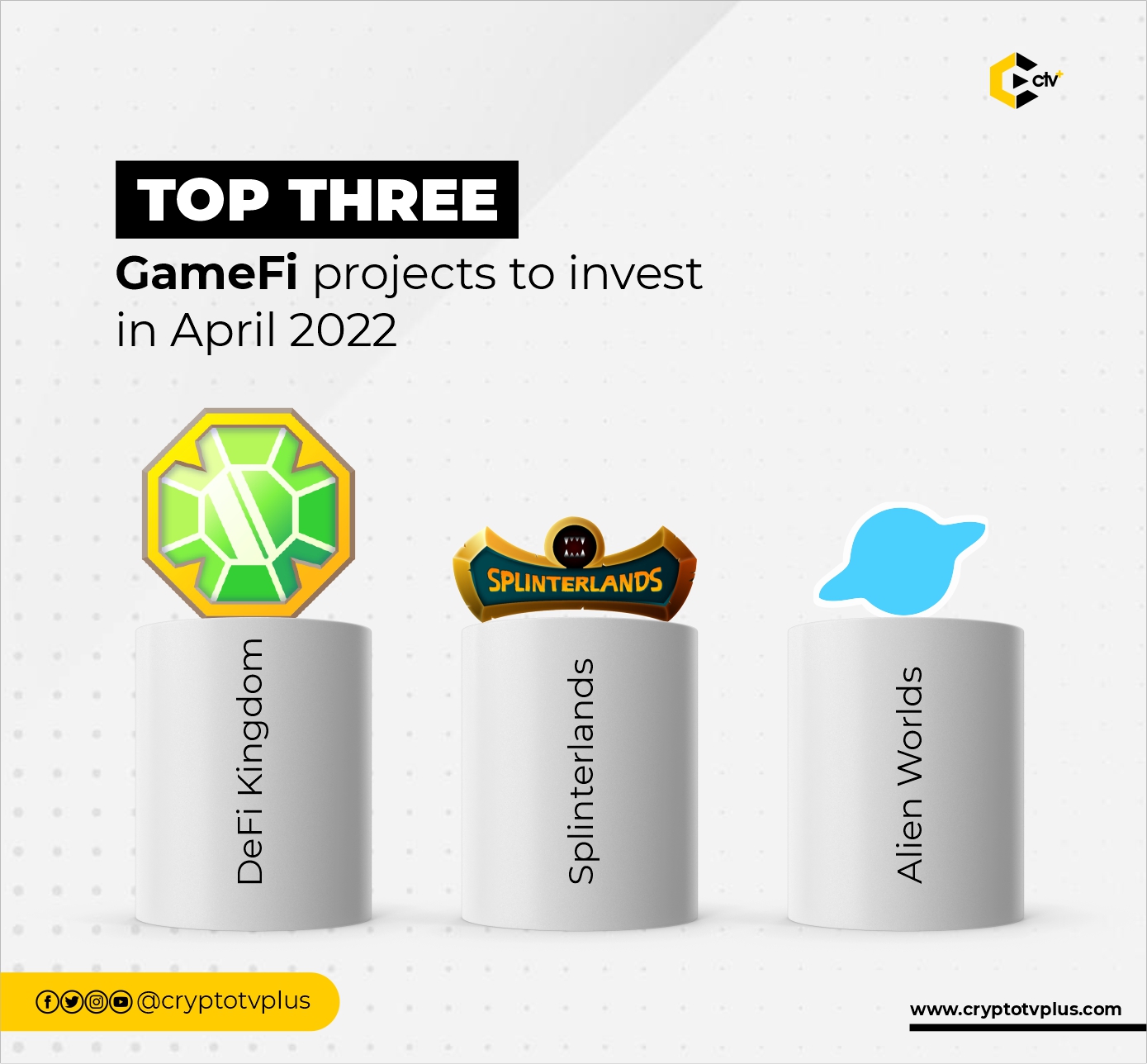 Known as GameFi, blockchain gaming exploded in 2021. Through the implementation of the play to earn (P2E) business model, GameFi has continued to gain mainstream adoption while re-engineering the existing traditional gaming experience

According to a DappRadar report, GameFi projects raised over a billion dollars in January 2022 alone. With the broader markets recognizing the potential of GameFi, everyone is betting big on well-established and upcoming projects. So, below we have brought to you top GameFi projects to invest in April 2022.

At the top of our list is DeFi Kingdom. It is a relatively new project but is well-positioned to challenge Axie Infinity with its P2E and NFT gaming on the HarmonyOne blockchain.

DeFi Kingdom is incredibly versatile. Apart from its GameFi offering, it offers various DeFi services that include DEX, liquidity pool opportunities, and a market of rare utility-driven NFTs.

The platform offers its native token ($JEWEL) as well as ‘Heroes’ which are characters that players use to compete in various quests, thereby earning more tokens. While in-game characters are represented by these NFTs, players can enhance and equip them with better gear to boost their chances of completing a quest.

A reason to be bullish about DeFi Kingdoms is its recent cross-chain expansion to Avalanche. This would significantly increase the locked value and tap into user bases on other blockchains.

On DappRadar, DFK is now ranked as number 5 GameFi and number 1 on Harmony One blockchain. It has seen a 5.57% increase in users increase in the last one week, at press time. April promises to be rewarding for DFK and its token – $JEWEL investors.

Second on our list is Splinterlands. It is a play to earn project that is fostering the next generation of collectible card games.

Splinterlands allows gamers to buy and sell digital cards with unique identifiers. $SPS is the project’s governance token and is integrated into the game by facilitating an increased level of decision-making and providing control over the products available to players, asset owners, and other stakeholders.

With growing interest among investors and GameFi enthusiasts, Splinterlands is the second GameFi project to invest in April 2022.

On Dappradar, it is currently ranked as #1 in general and in GameFi. It has seen a 6.29% increase in users in the last 24hours and a 2.76% increase in transactions in the past month.

Alien Worlds is the last on our list of GameFi Projects to invest in April 2022. It is an NFT metaverse gaming project that allows players to compete in various missions using unique digital items in the form of NFTs.

By competing with one another, players who complete their missions earn Trilium ($TLM), the in-game economy’s native token, which may then be used to take part in special Alien World missions that take players to various planets throughout the game.

Players can alternatively decide to form a group with which they can collectively take on different missions, build NFT drops, strategize about planetary politics, or create their custom missions or games.

A distinctive feature of Alien World is its cross-chain bridge feature which enables players to leverage Metamask as a medium to teleport to and from other blockchain networks, including the BNB Chain and Ethereum.

Investing in Alien Worlds in April 2022 will be worthwhile.

NB: It is important for traders/investors to do their analysis and research before they venture into any trade or investment.