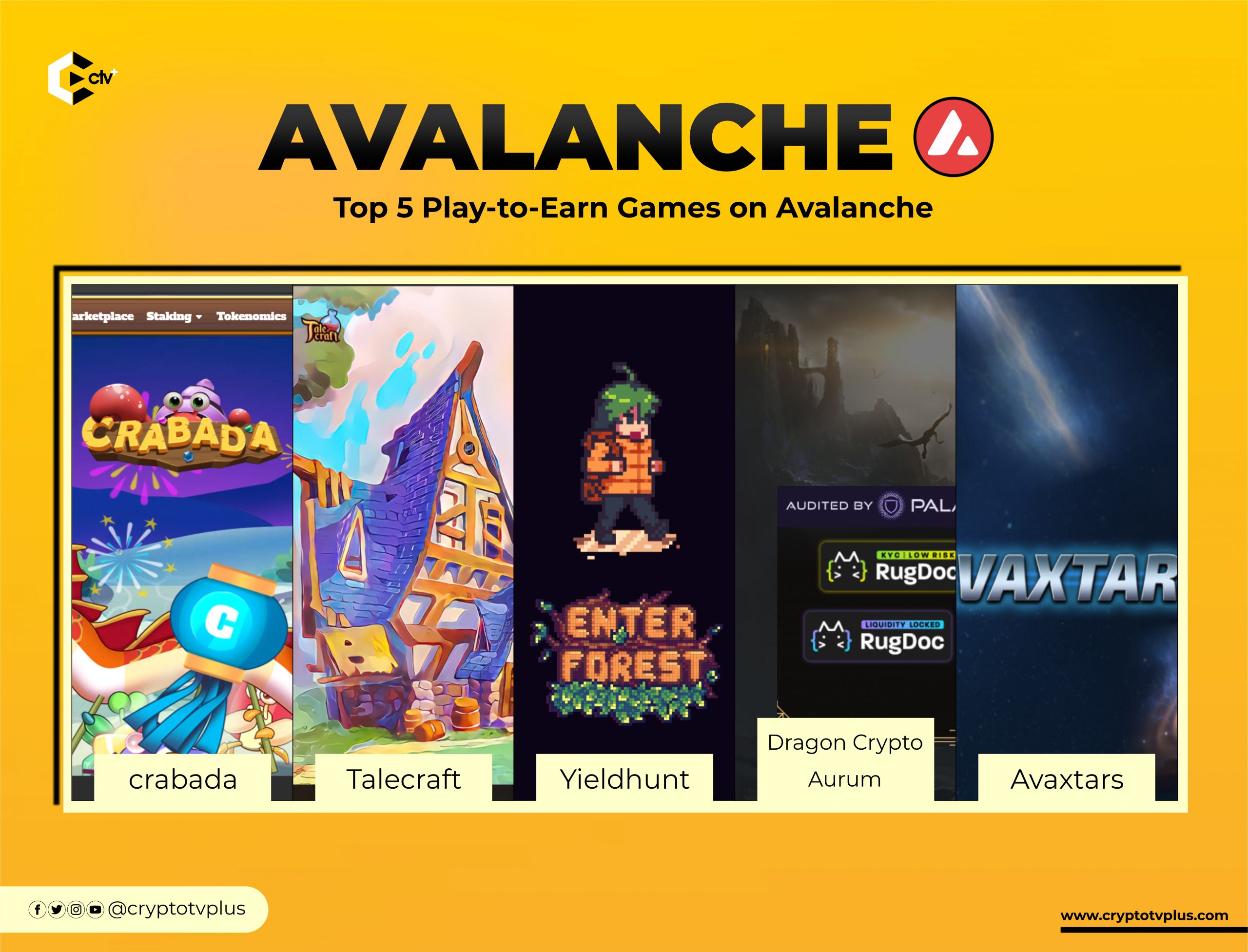 In the early days of blockchain gaming, the Ethereum network pivoted several play-to-earn games such as Axie Infinity and Crypto Kitties.

However, as the ecosystem grew, these games and new projects extended support to other networks, including Binance Smart Chain (BSC), Wax, Avalanche, and more. This integration became a catalyst for adoption, considering the entry barriers on the Ethereum network.

Avalanche network, a high throughput smart blockchain platform, is currently receiving massive attention from game developers due to its speed, cost, and low environmental impact, thanks to the proof-of-stake consensus mechanism it has adopted to validate transactions and secure its network. This article will identify the top 5 play-to-earn games on Avalanche.

Crabada bills itself as an idle play-to-earn game that hosts hermit crabs with fierce fighting skills. Each crab is an NFT and is called a crabada. The game is not fully developed, yet it is witnessing massive growth in active users due to the added play-to-earn functionality. As such, gamers are incentivised for their playing time using two tokens, each with a separate utility. $CRA is the game’s governance token earned through staking activity or by playing the game itself.

Treasure Under Sea ($TUS) is Crabada’s second token and serves as an in-game currency earned while mining, looting, and leading crabs during the gameplay. Both tokens became popular as investment options for investors, given their gaming utility.

Like most games, Crabada requires players to purchase a set of three crabs for partaking in each battle. Players with more powerful crabada NFTs can defeat other players by deploying unique skills. Each player can boost their crabs using the in-game currency— $TUS.

Since its inception, the daily active users on the game have been increasing, which also points to the growing adoption of the Avalanche network. DappRadar pegs the number of active users in the last 30 days at over 4,000, with over 2 million transactions done within the same period.

According to the roadmap, the game’s developers have planned a series of developments for 2022, including its availability on mobile platforms, land ownership, and a marketplace for 2022. Players will engage in battles across various platforms once the cross-platform battle mode is introduced.

TaleCraft is the first play-to-earn card game on Avalanche, with a unique mint and craft mechanism. Players are allowed to become more powerful through gamified NFTs. They have to mint and craft cards from elemental base cards sold weekly, giving the most skilled players room to thrive and progress more than others. TaleCraft rewards all NFT holders with AVAX yield generated within the ecosystem. The most loyal and skilled holders earn more rewards from the yield.

TaleCraft introduces a deflationary mechanism by adopting a novel minting process for the NFTs. The minting process boosts the game’s design and brings scarcity into the ecosystem, producing a sustainable and long-term economy. Each base card is burned to craft higher-tier cards to achieve this.

Furthermore, when chests are unlocked with $CRAFT— its native token, both are burnt and used to provide liquidity to bolster the game’s economy. The total supply of NFTs is determined and controlled by community demand inspired by free-market principles.

TaleCraft adopts the ERC-1155 token creation standard, leveraging the unique features for its crafting system. Players can engage in head-to-head battles with their crafted cards, testing their skills and demonstrating the power of each card.

Although a new game, Yieldhunt brings Ethereum-based Wolf Game to Avalanche with additional features. Yieldhunt bills itself as the best play-to-earn game on the Avalanche network in the wake of its launch.

The game revolves around two main characters— adventurers and hunters. Adventurers embark on a quest looking for $GEMS— the game’s native token— in a distant forest. In contrast, hunters act as villains, designed to steal $GEM discovered by the adventurers.

Adventurers can recruit other adventurers through minting when they accumulate more $GEM. Both characters are created as NFTs, with players having a 90% chance to mint adventurers and a 10% chance of minting a hunter.

YieldHunt is built on simple mechanics— hero and villain gameplay. Players who continue to acquire $GEM can trade it for other tokens on the Avalanche network, using DEXs like TraderJoe and Pangolin. According to DappRadar, in the last 30 days, YieldHunt has registered over 3000 unique wallet addresses, with more than 30,000 transactions and a $1 million volume.

Dragon Crypto Aurum (DCAU) is a play-to-earn game based in a fantasy-themed metaverse— Aurum Draconis. The game wraps itself around a metaverse filled with vast earning opportunities and gaming experiences for the community.

DCAU is leveraging a dual-token economy for its ecosystem— an eponymous token— $DCAU and another $DCAR, serving as an in-game currency for rewarding players, crafting NFTs, and staking. Players need to acquire tiny dragons as NFTs to participate in the game.

The tiny dragons are the game’s main character and play an essential role in enabling the ecosystem’s growth. Tiny dragons have only a supply of 1000. However, players can breed new and rare tiny dragons by combining Dragon DNA.

In addition, players can send these NFT dragons on missions to acquire valuable tokens, in-game items/NFTs, and Dragon DNA. Dragons are traded on NFTrade and YetiSwap NFT marketplaces.

Adopting a Sci-fi setting, Avaxtars is a browser-based play-to-earn (P2E) idle game on the Avalanche. Since its launch in Q1 2021, Avaxtars has been steadily growing a large following due to its unique play-to-earn mechanics that includes NFTs known as Avaxtars and three utility tokens, namely $AVXT, $ENXT, and $DGC.

Avaxtars NFTs are built using the ERC-721 token creation standard. The first set of Avaxtars created is Gen1 Avaxtars, with a total supply of 10,000. Each Avaxtar has a Digital Genetic Code ($DGC), pointing to their uniqueness and varying rarity levels— common, uncommon, rare, epic. The 10000 Gen1 Avaxtars are distributed according to these rarity levels, determining their success rate.

Gen1 Avaxtars have several use cases in the Avaxtars Universe. They are used within the Personal Avaxtar Generation Machine (PAGM) to create a new generation of Avaxtars known as Gen2. The Gen2 creating process allows players to earn extra $AVXT tokens or generate Digital Genetic Code Token ($DGC).

The process is also called Avatar Farming (AF), where two Gen1 Avaxtars are placed in the PAGM. Again, the rarity of each Avaxtar determines the outcome of the farming, which will be unsuccessful if each rarity is low.

A unique feature known as Boxdrop has been integrated into the Universe. The Boxdrop feature comes with Gen1 Avaxtars and can only be claimed once. The rarity level of a Gen1 Avaxtars affects the number of Boxdrops claimable by players.

Interestingly, boxes from the feature also have different rarity levels such as Silver, Gold, Platinum, and Titanium— affecting the amount of $AVXT tokens and other items that players can claim.

Players who intend to claim Boxdrops need to confirm whether the feature has been used when purchasing Gen1 Avaxtars on the marketplace. Players can also earn any of the game’s tokens as rewards.

Play-to-earn games have been well-received by the global crypto community, endearing them to thousands of users. Even mainstream gaming brands are trooping into the sector to gain market share. However, interoperability remains a focal point even as we expect more adoption.