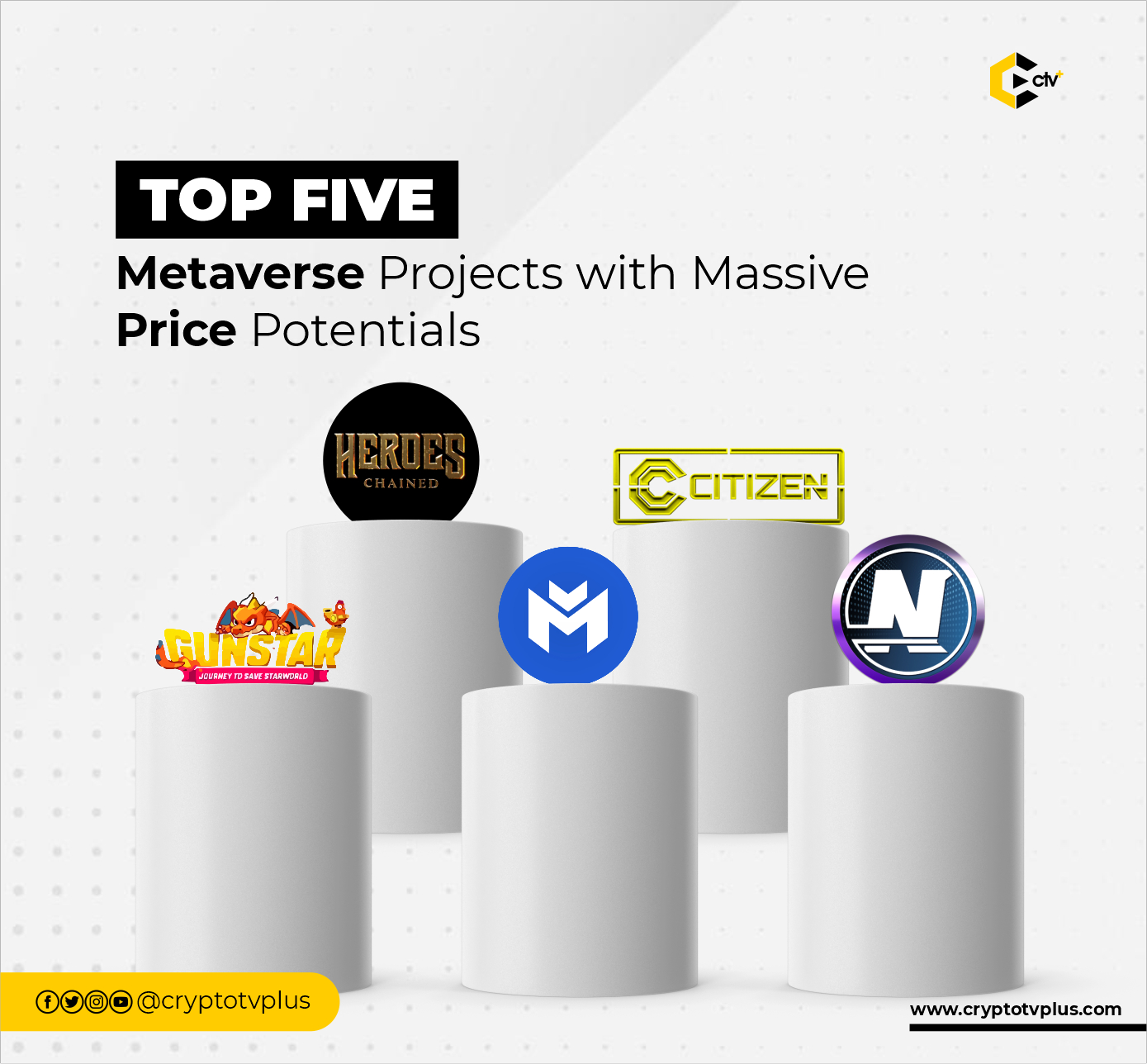 With the new wave of augmented reality, the bridge between the physical and virtual worlds is now being torn down and made to interact closely. So, it’s always worth keeping an eye on the best metaverse projects out there.

Gunstar has a very interesting storyline to it. In this game, humans gather together to tame the summoned beasts to destroy the monsters and save the human civilization in StarWorld. These monsters were created by a technology developed by humans but had multiple side effects.

The game is housed in a fantasy Star World, which is a mega-sized virtual world, which loosely depicts a harmonious life shared between mortals and the mystical creatures that dates back a thousand years.

After fulfilling their assigned missions in Pearl Island (gigantic continent surrounded by an array of islands and home to all the gamers embarking on their journeys to defeat these hostile monsters and save their Star World).

The Players’ primary responsibility is to attain a sufficient amount of GSC tokens to engage in their further heroic marches to the center-based homeland Skyland.

This project features in-game tokens and NFTs. Players’ day-by-day missions are to collect worthy bounties from hunting the Monsters appearing at the outskirts of the city. The NFTs (houses) can be sold in the marketplace.

It is important to note that the game also allows multiplayer options as players are recommended to opt for either solos or group-works with their fellow city-dwellers amid their endeavor to defeat these Monsters, which grow stronger and wicked as they venture further to the StarWorld continents. The more powerful creatures players can defeat, the more rewarding score they can obtain.

This project is being managed by Gunstar Labs. The team is vietnam based and has wide varying skills and experience in the blockchain environment.

Also, it is important to note that the Gunstar Metaverse has passed the Smart Contract audit and it was done by Hacken.

Mavia is the world’s first AAA Blockchain based Builder Game. In this game, players strive to build the best bases so as to defend against enemy invaders. The base is the home of each player and it has to be defended at all cost.

This is done by strategically building walls, deploying turrets and placing traps to trap the enemies or scare them away for your precious Gold, Oil and RUBY.

A lot of thought has gone into game production as players are allowed to build and lead an army of infantry, construct plans for vehicle and air attacks. As with any other PVP game, one has to do some strategic planning before embarking on any battle with an opponent.

As with other P2E games out there, this project has in-game tokens and NFTs. The tokens can be won by successfully defending bases, removing base obstacles, completing challenges and so much more.

The Mavia ecosystem was created by the Skrice Studio Team and provides a full suite of tools that make for a uniquely immersive experience. It is backed by industry giants such as Binance Labs, Crypto.com, Delphi Capital, Animoca Brands, Merit Circle, Yield Guild and others.

Through the combination of NFTs, the transparency of blockchain technology, and decentralization this game will reach heights never seen before.

Nova is an infinite universe that is home to many warriors that battle to obtain the true power of the universe – the precious ores are called Nova. Each warrior wears his soul on his sleeve throughout every battle. Through each victory or defeat the warrior’s Nova soul grows.

The stronger the soul – the more energy the warrior has; to continue battling. The warriors obtain pieces of the universe’s  precious Nova ores that allow the warriors to unlock their true potential and ultimate power!

In Nova Battles, rewards are gotten daily in the PVP activities while single victory rewards are gotten from PVP duels. Players can also lease or trade the in-game resources like Nova souls while still vying to win rewards by participating in various planet ecologic construction initiatives.

Nova Battles is being developed by a game studio consisting of 60 game developers and headquartered in the heart of UAE, Dubai. It was founded in early 2019 with the end goal of  developing the feeling of excitement that both crypto investors and gamers feel – under one roof.

Striving to build an autonomous system for the game’s development, they have partnered with Uniswap, Etherscan, Bitcoin.com, YieldGuild, and many others. The in-game token has been audited by Solidity Finance – which is a well-renowned auditing smart contracts auditor.

Heroes Chained is set in the mythical world of Ventuna, home to many races and lands and where dark forces under the leadership of the Dark Lord Oblivion and his minions have spread their malign “fog” to allow them to conduct a reign of terror.

Set against them, a brave band of heroes created Last Hope City as a hidden refuge against the Dark Lord’s reach and influence. This is where you start their quest. The quest is to free Ventuna from Dark Lord Oblivion’s influence.

This game is a next-level Fantasy RPG as it incorporates the “Play And Earn” concept of GameFi. Players can build guilds, gather heroes, craft gears, upgrade caravans, go to the tavern to socialize, battle PvP at leagues, arenas and tournaments. [layers are also allowed to go beyond the city walls for missions, quests, and dungeons.

Defeat enemies, uncover nodes and buy the land to claim them. Anyone can explore the dark world of Lord Oblivion but bear in mind that the further you go, the harder it gets.

On the home page, the game has testimonials from notable game companies like Blizzard, Riot games, EA sports, Unity and many others. Heroes Chained is backed by Avalanche, Kucoin, Pangolin, Keychain Capital, Banter Capital, and many others.

CryptoCitizen is not just any game. It’s a unique, online world crypto immersive experience with a breathtaking storyline, waiting for you to become a main character. You have to work your way up to be a Boss and take the fate of Metropolit into your own hands.

The game is based on the futuristic city of Metropolit. In the year 2101, after the technological revolution, the city was taken over by big corporations. These corporations have control over weapons, robotics, pharmaceuticals, communications and most of them are basically above the law.

As with the street culture of Metropolit, Players must evolve their avatar into a strong fighter so as to fit into the strength-based anarchy the city is built on.

Players must fight the best street fighters to increase in rank and form gangs to embark on the mission of standing up against the control of the Korpo world (big corporations). The greater a player’s crew/gang gets, the higher their social status becomes.

In this futuristic city, there is only one global currency (cybercash). It is used to enlarge and scale the NFT marketplace to its fullest potential. The team promises unlimited rewards and exchange price stimulation techniques to bring maximum profit to gamers and NFT holders, to level up and destroy competition.

The game is backed by Binance smart chain, polka starter, seedify, Maven Capital and many others. It has also been featured on Cointelegraph, Investing.com and News Btc. With 250k active users, and $10m in gamevalue, Crypto citizens is definitely one to watch out for.

As with any new field, there’s a lot of price discovery potential if one is early enough. Metaverse presents a massive opportunity and has already spawned a lot of infra companies but while these are exciting to watch, there is still more room for these projects/games to evolve.

Remember that this is not financial advice. Always endeavor to carry out further personal research to get further clarity on matters such as these.

Related Topics:Crypto CitizensgunstarheroesunchainedMaviaNova Battles
Up Next