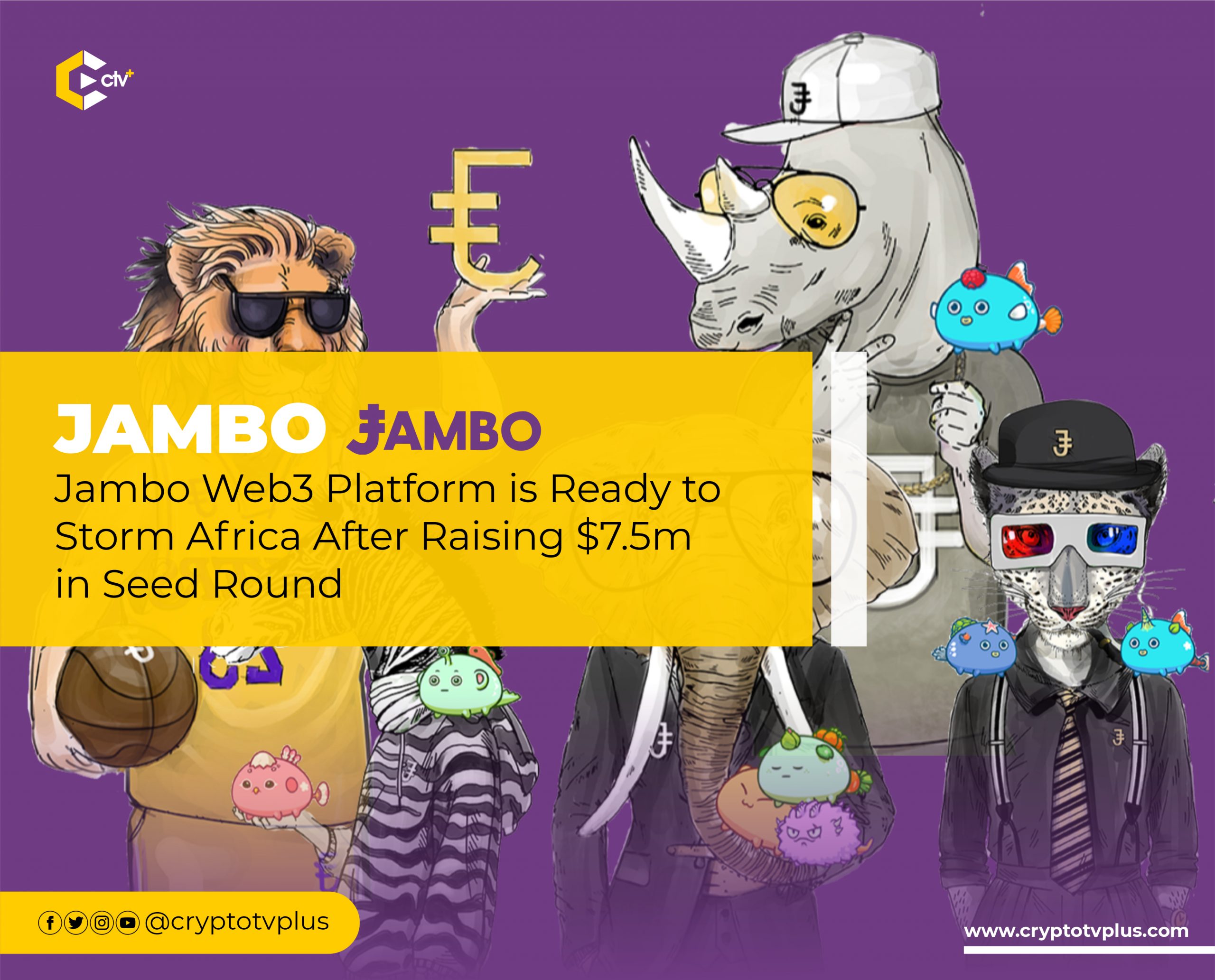 Jambo Web3 Platform is Ready to Storm Africa After Raising $7.5m in Seed Round

No continent has been excluded from the heat created from the “cooking spot” of the blockchain revolution. It’s either the bearish race on bitcoin is all over the news or the pump of Memecoins like Dogecoin and Shiba is making their young population seek the advantages cryptocurrencies offer. What do you expect when inflation is ravaging most fiat currencies in double digits?

For Africa, the case is not different. We have a population of over 1.4billion where it is projected that by 2050, more than half of the population at that time will be below 25 years. The continent has seen serious plight in economic situations due to several reasons from local governance to international politics and other factors. However, this bubbling population is beginning to realize that they have their destiny in their hands. Furthermore, crypto is saying that that destiny can be better no matter where you are. Thanks to Satoshi!

Web3 softly came into the spotlight in 2009 when Bitcoin was launched. No one had the best idea of how it will turn things around real fast. By 2013, one of the first local focus crypto exchanges came into being: Luno of South Africa that has been sold to Digital Currency Group. This opened the market more for Africans to see the goodies cryptocurrencies have to offer. Apart from Luno, there are a host of more blockchain brands that have been built by Africans for Africans.

Wala is one such innovative startup from South Africa that is targeted at bringing blockchain innovation to ease remittance for Africans with a huge presence in Zimbabwe, Uganda and South Africa. NairaEx, a Nigerian startup, was founded in 2015 and is currently one of the most popular crypto exchanges in Africa with over 100,000 users, matching up to more than 1 million transactions. SureRemit of Nigeria is making remittance easier for Nigerians using blockchain technology.

Tracr from Dr Beers of South Africa helps to track jewelry activities from Africa also using blockchain technology. Bitland in Ghana; Tari in South Africa, and BitPesa in Kenya are all deploying blockchain but solving different problems for Africana – Bitland solves land ownership challenges, Tari is helping Africans deploy dApps on their platform while BitPesa is focused on reducing the cost of cross-border currency transfer.

Challenges of Crypto Adopting in Africa

Even though crypto is becoming mainstream in Africa from statistics, there are still so many who don’t know about crypto let alone use it for any activity. From research, one of the major challenges to crypto adoption in Africa is education. And this starts from awareness of the technology which needs to be localized.

Yes, it’s said that the continent houses one of the highest numbers of uneducated people. That alone is not encouraging. However, it’s also clear that one reason for that is the lack of the localization of education. So you see most systems using foreign languages like English and French and Portuguese instead of what the natives are used to.

Thanks to a lot of efforts taken by some South African startups that support local languages of their clan with Swahili being one of the most spoken languages in the world. And of course, on the platform of blockchain adoption, a mix of localization, the deep penetration of smartphones, and education will breed more inclusiveness. This is what has brought about the Jambo App.

Jambo means “hello” in Swahili and that’s just a perfect name for an innovative project for the continent. The goal of the Jambo App is to “onboard the next millions of users to Web3 in Africa”, said James Zhang, Co-Founder, and CEO of Jambo. All the descriptions given above are a good reflection of the opportunities that are available for investors and innovators to utilize in servicing the second largest continent in the world.

It’s so visible that the young people want to be part of what is happening but need true tech leaders that will create native products suitable for the populace. The Wakandainu project is an example. Then far away in the Philippines, we’ve seen how the young population grabbed the Play-to-Earn games and are making some money for themselves. There might be some challenges with this though but it represents the current circumstance.

For every business use case, there’s always a tactic that spells out more success for the project even before the launch. Proper marketing is vital to make sure that when products are launched, you don’t find yourself giving what your end-users don’t want, therefore defeating one of the first laws of creating a business… businesses solve problems.

Jambo is thrilled to introduce the energetic young population of Africa to Web 3 financial ecosystems via play-to-earn gaming and decentralized finance (DeFi) services not leaving out currency exchanges and remittances. Their strategy relies on these:

In 2012, just 32% of Africa’s population had access to smartphones while 2018 and 2020 indicated a rise to 44% and 46% respectively. By 2025, this number is expected to be up to 50%. Yes, energy efficiency is not yet at its peak in the continent, these technologies are gaining traction in the hands of Africans.

These same devices have been used to access social media sites like Facebook, Instagram, Twitter, and YouTube for business, education, and entertainment purposes. Jambo is an app that can be downloaded on a smartphone and instantly usable, utilizing the mobile trends in existence… the number of mobile users in Africa is 650m.

One major proposal from the Jambo platform is the creation of learning systems that will teach native Africans about crypto properly in their native languages. For example, decentralization is “ntọhapụ” in the Igbo language and “ugatuaji” in the Swahili language according to Google translate. That’s how to learn this faster for some communities.

Some projects have failed because of the absence of nativity in execution. JamboAcademy handles this aspect with the Jambo Ambassador Network that will run a series of classes in various African Universities to capture their young population who in most times graduate from school but can’t access any job. The lessons that will be held will come in as online and offline, in-person workshops, and tutorials.

The localization of the learning process will require a team that’s native to the target market. The Congo-born Chinese siblings, who are also Co-Founders of Jambo, had their childhood in the Democratic Republic of Congo in a family that had spent about the equal time of three generations in Africa. With this, you’ll realize that he has a grasp of what it takes to reach out to Africans.

It’s also good to know that he graduated with a degree in Computer Science from NYU in 2017 and built a four-year experience in crypto funding before creating Jambo. Other team members are also aligned with the African philosophy and are well-grounded in crypto knowledge.

This is the gold for Jambo. More than 60% of the African population is 25 years and below. That is a massive number for a continent. Human labor is not an issue but resourcefulness is where the challenge is. Jambo is targeting about 22.7% of the global market that is ready to use its product. The market is there. It’s not speculation. And they are ready to be led into innovations that will make life better for them.

Blockchain is at the centre of this. To many who have not been to Africa, they find it hard to believe the revolution caused by crypto-based activities. Gladys speaking with Africa Renewal during an interview said that her Bitcoin mining activities started in September 2017 and within six months she had a profit of $800 after investing $700.

Blockchain gives this freedom and limitless possibilities to Africans who don’t truly have trust in the banking sector that is almost controlled by leaders who are far intimated with the challenges these youngsters face. Inflation for most African nations is at double figures. Jambo is cashing in on this gap to give young Africans back their livelihood.

And beyond the just earning is the data saving plan, where Jambo is working with telecom firms to help users get data directly at 50% off the price; Play-to-Earn structure which is where GameFi comes in reflecting the Philippines situation to help African users earn money while they play games; and Watch-to-Earn process in connection with social media platforms so that users can earn tokens that can be converted to real money as they watch or use contents from these global brands on the Jambo App.

Support for the Project

The three-month-old baby has attracted the attention of crypto enthusiasts from individuals to organizations.

Some of the individuals include angel investor, Co-Founder, and CEO of Tarreform Labs,  Do Kwon; Sandeep Nailwal, Co-Founder and CEO of Polygon, and Santiago R. Santos, who’s a Web 3 investor. Coinbase, 3AC, Alameda Research, Delphi Ventures, Three Arrows Capital, AllianceDAO, and Polygon Studios are among the major investors raising $7.5M in Seed Round for Jambo.

Santos, speaking about the project, believes that it can achieve for Africans what WeChat did for the Chinese. Africa has a population and a fair enough internet penetration of 46.2% as of 2020 and has experienced an increase of 1,200% in the crypto market growth of the continent.

The finance raised for Jambo will be targeted at developing the mobile app which will onboard as many young people as possible. Education will be used as the major key to the adoption of crypto which will be followed by the opportunities to earn money while playing games. “Honestly, anything that helps in Africa – send money, save money, make money – is what we’re testing off of the super app,” said James Zhang. On the development roadmap is the inclusion of a digital wallet later.

About 12,000 students from Nigeria, South Africa, Ethiopia, the Democratic Republic of Congo and across more than ten other countries have signed up to the platform as a test run to take Web3 curated lessons online and offline. The 10-week program will bring the needed feedback to make more progress for the development of Jambo.

So, Africa will not just have only the likes of Yellowcard and Bitmama that have raised $15 million and $350,000, respectively from investors to join the crypto revolution in Africa, but many more companies will be birthed from the continent. Jambo is ready to rumble with its beta version planned to be launched and go live by Q2 and Q3 of 2022.