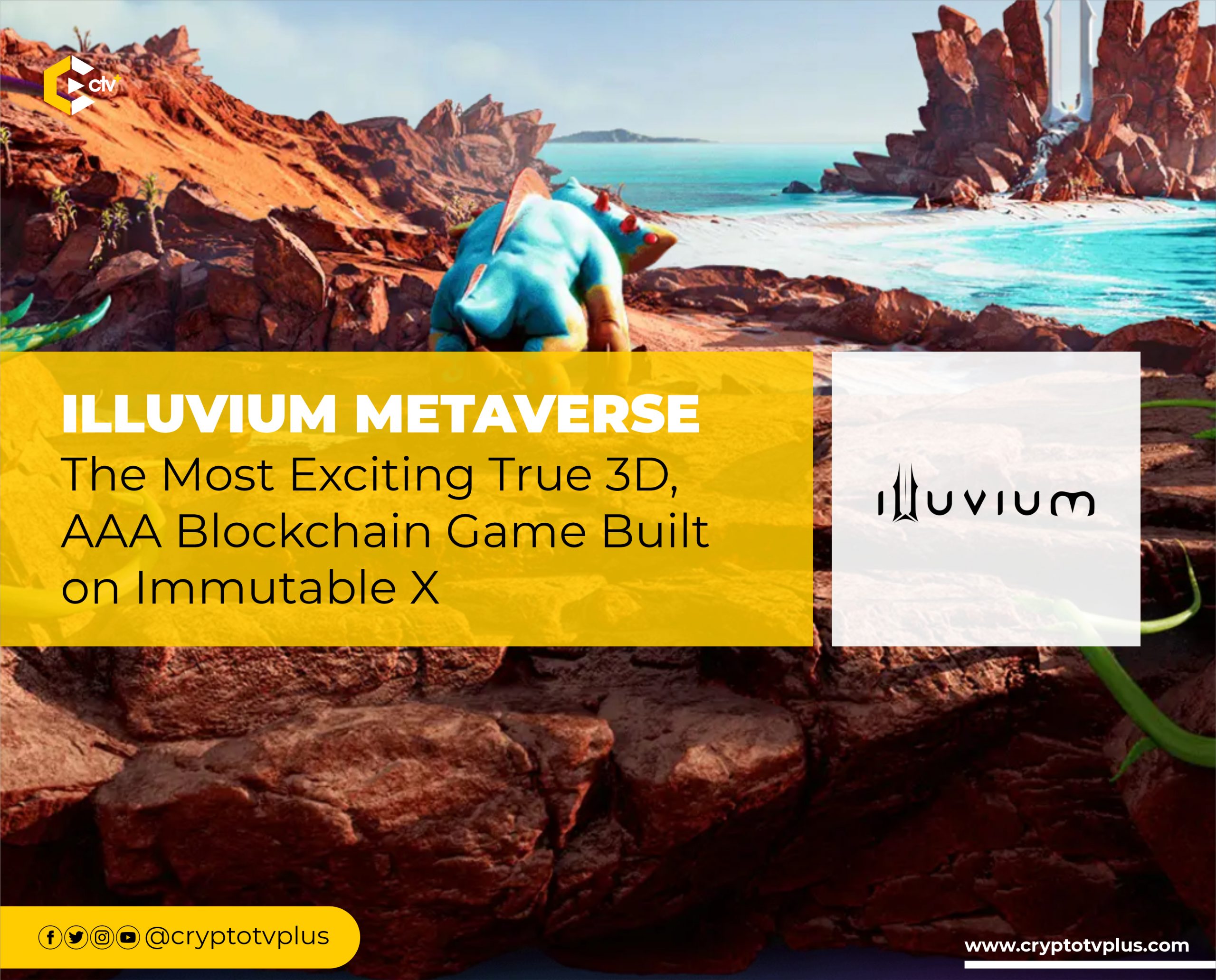 Exclusivity is a sign of richness in essence and value. This is one quality Illuvium Metaverse has. Although it’s going beyond giving the rich Metaverse gaming experience to a few so that more people can come in. In a blog written by one of its Co-Founders, Aaron Warmick, it was explained clearly: “Additionally, we will probably open up the game to a large audience (possibly unlimited spots) as Private Beta 3. Everyone could experience the game, even if they weren’t playing for keeps. We will confirm details ASAP, as we are committed to full transparency”.

You will hardly see a very interesting game with so much fun packed in it like Illuvium. Apart from the explanation given above, Illuvium has over 100k people who want to be part of the ecosystem that has selected only 17 influencers across six languages, out of 160 influencers that have applied to be part of the marketing team. It’s indeed a project with a global face.

Illuvium is a role-playing game built on the Ethereum blockchain by the Illuvium DAO (decentralized autonomous organization), with a combination of DeFi utilities and the Metaverse. Players explore a 3D open-world searching for creatures called Illuvials that they can collect and use to battle other players.

These Illuvials have classes and affinities. There are five classes and five affinities that have their strengths and weaknesses. As you win battles against other players and complete quests, your Illuvials become more powerful.

Team Illuvium has Kieran Warmick, the Co-Founder, as one of the top influencers of the organization. In the flow with the e-commerce industry, he got introduced to Bitcoin and Ethereum courtesy of his brother. That moved him to join Blueshyft, a startup where Bitcoin could be exchanged for cash OTC.

While working with DoorDash, a global business, the DeFi rush came in and he decided to hop on with his brother Aaron, who’s a Game Designer, creating Illuvium.

Aaron Warmick, another Co-Founder of Illuvium, from childhood, had a great obsession for games. Thanks to the courses he studied in school – Engineering and Physics – University of Wollongong, AU. AI also caught his attention and down the line, he had to join his brother to build one of the most exciting AAA games built on the Ethereum blockchain. Apart from being a Co-Founder, he serves as the Chief Game Designer and story supervisor of Illuvium.

Other team members include Nate Wells, a Game Producer with 20+ experience in the gaming industry; Basil Gorin serving as the Chief Technology Officer, with more than 15 years of experience as a full-stack developer, tech designer, and software engineer working for firms across the globe from Israel to Germany to Estonia.

Tokenomics and How to Earn on the Illuvium Platform

In the Illuvium ecosystem, ILV, an ERC-20 token, is the native token that comes in two variants: ILV and sILV. The rewards from ILV can only be retrieved after one year while sILV can be used for instant participation in the game. The maximum amount of the token that can ever exist is 7 million combining ILV and sILV while 3 million will be given as staking rewards totaling 10 million.

Of the total supply of the token, 20% was sold during seed rounds, 15% was given to developers, and another 15% to the treasury, launchpad received 10% while 30% was dedicated to yield farming. The remainder, 10%, is scheduled to go into in-game rewards.

There are three main uses of ILV: playing games, staking, and participation in governance. These three ways also facilitate earning. How?

Players get rewarded as they play games, achieving certain levels of success while playing. Remember that before you play any game, you need the ILV token, that is one of its purposes. Once granted access, a user can begin to purchase other assets in the form of NFTs to have better chances of winning more challenges.

For the earning part, in the process of playing, there are instant rewards received for each challenge overcomes or each level crosses as you see in the Temple Run game but in this case, your rewards can be monetized.

Another aspect of gaming is involvement in tournaments where huge prizes are presented for the winners. Those prizes can be invested back or liquidated depending on the kind of tokens it is received as.

Staking is an old system but being renewed in with DeFi functionalities where digital assets can yield so many returns per time. In the Illuvium Metaverse, stakers of the token also get rewarded for allowing the assets to be used to enhance activities and processes in the ecosystem. The rewards can be ILV or sILV.

This process can be through yield farming or revenue sharing where buybacks for ILV stakers are done of each ETH spent by players. Another process of staking ILV is in Flash Pools. In Flash Pools, partner tokens are staked to receive ILV rewards that can be claimed after a year or immediate sILV rewards.

To stake ILV, you’ll need to ensure that you’ve transferred your ILV to an external wallet that can connect to DApps like Metamask or Binance Chain Wallet.

Another use of the token is in governance where holders can vote in on decisions made to change or improve features of the game.

In the Illuvium DAO, there are a lot of awesome systems set aside to control how decisions are made including Illuvinati Council, Council Vote Election, Quadratic Voting, Council Epoch, Meta-Governance, Council Stipend amongst others.

Projects are always in a fluid state and that means some of the programmed dates can change but the roadmap will remain to guide. Illuvium created a plan in which the prototype will be released in November 2020 followed by a transition to Unreal Engine in December, and these two were done in 2020.

Auto Battler Trailer, Yield Farm Contract V2, and Private Beta are still in development. They were meant to be implemented in 2021. 2022 is meant to be for Public Beta Launch, Mobile Release (this will be so good) while Illuvium: Zero and Illuvium: Zero Land Sale is being ratified.

In terms of marketing strategy, the game plans to cover two major kinds of audiences: DeFi and mainstream. The DeFi targets are those organizations that are in full-blown usage by users where Illuvium can partner with them to offer a deal for their community. The goal is to expose the community of the top gaming DeFi platforms to the utilities available in Illuvium.

The mainstream system is all about gamers directly using influencers in the gaming industry, especially YouTubers. Currently, some top YouTubers have joined the list of influencers that Illuvium will partner with to deliver their services to the world.

For Illuvium, the community is magic.

This tweet shows a challenge that affects most blockchain platforms. Hackers are eager to steal funds from such platforms and it also shows that there is more work to be done from the back end.

For Illuvium, another challenge that is similar to this is how fast their development will run relative to the time frame plans they shared with their community. The delay might cause a gap to lose the enthusiasm they have gathered for a while.

Let’s also ask, when will the mobile version of the game be out? There’s no confirmed date for that now. And that is not too good for such beautiful work. Mobile is the future of gaming.

Perhaps, they might have better plans for the community they have access to now. The plans they shared look so good and hopefully, more developers will come in to make sure that goal of the game is achieved.

In conclusion, Illuvium is making the reality of games that will give the best of mixed experience where you play and earn as well. You can check their discord community to know what’s happening and the website. The ecosystem is enlarging every day and we don’t know what will come next.

Progress in line with what the market, especially gamers, need is what most projects will be focused on. And if this is done, then a lot of people will cry with passion like Aaron, the Co-Founder of Illuvium said in a blog post, “I want to see people cry”.

An Overview of Nakamoto Games and the Nakaverse

How To Build & Conquer Planets On 0xUniverse – Crypto Watch Daily

[…] platforms like Solana, Ronin, Illuvium, Virtual World Alpha, and more will have to do more to get the attention of the market. There’s […]

[…] left “big brother” Dogecoin in the league of memecoins and can have a closed-door meeting with Illivium, MetaStrike, Genesis… Endless Battlefield, Pirate X Pirate, Mercha Morphing… the list is […]