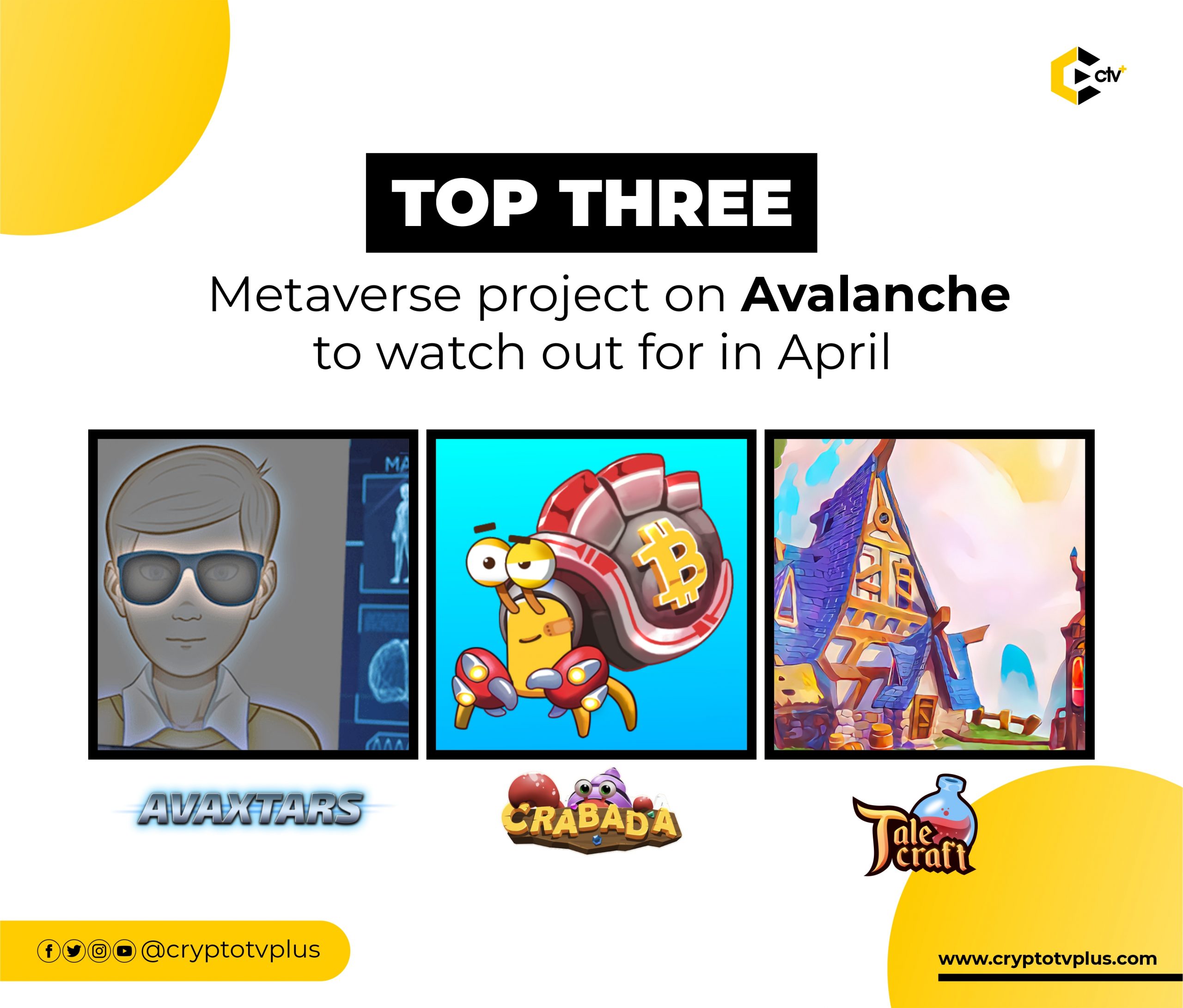 Avalanche is one of the most intriguing and not fully-explored blockchains for Metaverse projects. It has a $24.75 billion market capitalization and is ranked 11th according to Coinmarketcap.

Avalanche is a smart contract-capable blockchain platform focused on transaction speed, low costs, and eco-friendliness. It was designed to be perfect for interacting with various dApps and Metaverse projects.

Below are the top three Avalanche-based Metaverse projects to invest in April 2022.

The first Avalanche-based metaverse project on our list is Crabada, it is a crab-themed play-to-earn NFT game, where players assemble a team of three crabada to earn the in-game currency Treasure Under Sea ($TUS).

Crabada is one of the first functioning play-to-earn games on Avalanche and stands out with its intriguing gameplay and game design.

Crabada is a P2E game that is undervalued. It is fun to play, it has a working game with an ambitious roadmap and a team that is delivering. According to projections, it would reach Axie Infinity’s heights following this trajectory.

The second metaverse project on Avalanche to explore in April 2022 is TaleCraft. It is a Gaming NFT project, a PVP, play-to-earn cardboard game where players earn NFT cards to match other cards with 4 main elemental attributes: Earth, Water, Fire, Air.

TaleCraft is one of the first NFT game waves that is launched on Avalanche Network. Its IGO on Avalaunch was a big success, with funds raised up to $900,000. TaleCraft’s NFTs are drawn by many talented artists, it is currently a hot topic of Avalanche’s GameFi.

$CRAFT token is the game’s native token. It has a market capitalization of $2,769,173. But away from that, it is obvious that TaleCraft offers a new and fun way to use NFTs. With TaleCraft, NFT can be used for gaming to change its value, proving that it is not simply worth as collectible value.

In view of that, there is a potential for Talecraft to collaborate with other big projects this month, investing in TaleCraft would be worthwhile.

Top VCs Investing in the Metaverse

The last on the list is Avaxters (AVXT), the popular Avalanche-based metaverse coin was released in October 2021.

Avaxtars is the first browser-based idle sci-fi game built on Avalanche’s C-Chain. It has a roadmap with progressive development with $AVXT as the native currency of the Metaverse game.

Recently, a price rally came after Avaxtars announced a partnership with Kaira Network, the first social network on Avalanche. The partnership will let users connect their Avaxtar NFTs to the Kaira Network platform, create content, and earn Kaira tokens while socializing.

The partnership news coupled with the gaming platform’s growing ecosystem, high positive social sentiment and retail euphoria makes it one of the top metaverse projects on Avalanche to invest in April 2022.

NB: Cryptocurrencies generally are highly volatile and it is expedient for traders and investors to do their own research and analysis before aping into any coin.