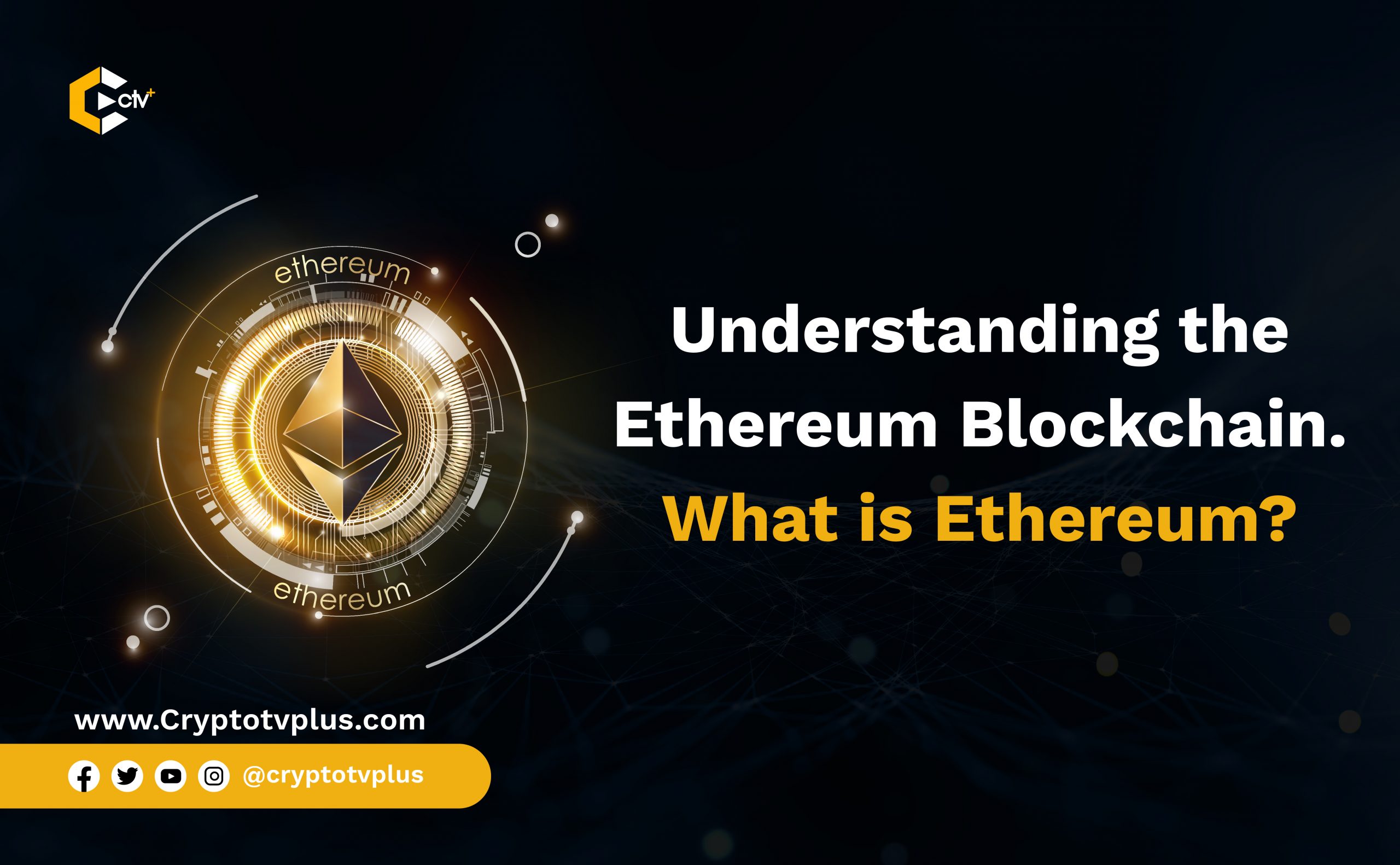 What is Ethereum?; Fundamentals of the Second Largest Blockchain

Ethereum is a decentralized blockchain platform that establishes a peer-to-peer network that securely executes and verifies application code, called smart contracts. Smart contracts allow participants to transact with each other without a trusted central authority.

Transaction records are immutable, verifiable, and securely distributed across the network, giving participants full ownership and visibility into transaction data. Transactions are sent from and received by user-created Ethereum accounts.

A sender must sign transactions and spend Ether, Ethereum’s native cryptocurrency, as a cost of processing transactions on the network. This decentralized network is part of the appeal of Ethereum and other cryptocurrencies.

Users can exchange money without the need for a central intermediary such as a bank, and the lack of a central bank means the currency is nearly autonomous. Ethereum also allows users to make transactions nearly anonymously, even if the transaction is publicly available on the blockchain.

What Does Ethereum Do?

Ethereum can power a number of applications offering a wide range of functions:

Currency: With a cryptocurrency wallet, you can send and receive ether or pay for goods and services, if the digital currency is accepted as payment. Some platforms, such as Coinbase, even allow you to take custody of your coins in a digital wallet, so you can make them less exposed to hackers, in theory.

Smart contracts: Smart contracts are a kind of permission-less app that automatically executes when the contract’s conditions have been met.

Non-fungible tokens: These tokens can be powered by Ethereum and can allow artists or others to sell art or other items directly to buyers using smart contracts.

Decentralized finance: By using Ethereum, some people may be able to avoid centralized (government) control over the movement of money or other assets.

It might be more accurate to think of Ethereum as a token that powers various apps rather than as merely a cryptocurrency that allows users to send money to each other.

Is Ether the Same As Ethereum?

Ethereum and ether work in tandem, but they’re not the same. “Ethereum is the technology, and ether is the actual cryptocurrency,” explains Farrington, a renowned writer and crypto enthusiast. “You can think of ether as the actual ‘cash’ or fuel that powers the Ethereum network.”

Where Do Ether Coins Come From?

As of December 2021, there was about 118.6 million ether in existence. And while new coins could be “mined,” the total annual issuance is limited. That contrasts sharply to Bitcoin, where a maximum of 21 million coins can be mined and new issuance becomes harder each year.

And it contrasts still further with Dogecoin, where issuance is completely unlimited. Ether coins and those of other cryptocurrencies are “mined” by the computers on the network. They perform mathematical calculations that effectively unlock coins or fractions of coins.

That setup is changing, however. Both the Bitcoin and Ethereum blockchains use what’s called “proof of work” to mine new coins and validate transactions. It’s an expensive, energy-intensive, and time-consuming process that can clog the network. So the minds behind Ethereum have decided to change their system to a “proof of stake” system, which is nicknamed Ethereum 2.0.

The Differences Between Ethereum and Bitcoin

Ethereum’s Blockchain technology is similar to Bitcoin. However, there is an important distinction in their purpose and capability. Bitcoin only uses one specific application of blockchain technology. Ultimately, it’s an electronic cash system that enables online bitcoin payments. The ethereum blockchain does track ownership of digital currency, but also focuses on running the programming code of a range of decentralised applications.

Other differences are: Ethereum allows developers to raise funds for their own applications. They can set up a contract and seek pledges from the wider community. Ethereum by design also enables the creation of new digital assets or tokens of various standards but it’s not possible on bitcoin.

There is also a finite number of bitcoins available (estimated to be 21 million). With ethereum, the issuance of ether is capped at 18 million per year, which equals 25% of the initial supply. So, while the absolute issuance is fixed, relative inflation decreases every year.

Instead of mining for bitcoin, miners of the ethereum blockchain work to earn ether.

They cost their transactions in different ways. With ethereum it is referred to as ‘gas’. Costs of transactions depend on bandwidth usage, storage requirements, and complexity. With bitcoin, transactions compete equally with each other and are limited by block size.

Should You Buy Or Mine Ethereum?

If you’re looking to speculate on Ethereum, it’s simple to just buy and trade the cryptocurrency on a popular trading platform such as NaijaCrypto, Paxful, Binance, Kucoin, Luno, etc.

You can access the market 24 hours a day, and you’ll have good liquidity, meaning you can transact without moving the price much. The profit calculus is simple, too: You profit when you sell coins for more than you paid.

If you’re thinking about mining Ethereum, you have to think like a business owner. You’ll have to invest significant amounts of money in mining rigs so that you can produce the cryptocurrency and then you’ll have to expend costly electricity as you mine it.

You’ll need to run the numbers to see if it makes financial sense for you to make the initial investment and keep your operation running. That is, you want to earn coins that are worth more than you paid to mine them. With Ethereum’s validation system changing from Proof of Work to Proof of Stake, would-be miners or validators need to be sure the profit is still there.

In the end, it’s easier to buy Ethereum than to mine it and requires less effort. There may be a profit potential in the mining of cryptocurrency, but you’ll have to see if the numbers work.

price is affected by different factors to those which affect traditional currencies. It is less exposed to economic and political influences but is affected by factors such as:

Availability – Unlike bitcoin there is no limit to the supply. However, units of ether are still added and lost over time, causing its availability to fluctuate. Regulation – Ethereum is currently unregulated by both governments and central banks. If this starts to change over the next few years it could have an impact on ethereum’s value.

Media – Negative media coverage, particularly around security and longevity, can have an impact on price.

Technological advances – The future of blockchain technology is unknown. But, its integration into areas like payment systems and crowdfunding platforms could raise its profile.

Note: Ethereum is powering the Web 3.0 era of the internet.

[…] explore features of the Harmony blockchain. Some are similar to what you’ll see for Ethereum based blockchains while others are not especially in terms of the combination and […]

[…] post, we’ll explore features of the Harmony blockchain. Some are similar to what you’ll see for Ethereum based blockchains while others are not especially in terms of the combination and […]

[…] the old version. Two other reasons can be for the mutual upgrade of the previous version like what Ethereum is planning to do or as “a way to crowdsource funding for new technology projects or […]

[…] The official introduction of blockchain technology via the emergence of Bitcoin came alongside other goodies that have taken the front pages of global media coverage. Blockchain came in first as cryptocurrency and then smart contracts got in the way with Ethereum. […]

[…] The official introduction of blockchain technology via the emergence of Bitcoin came alongside other goodies that have taken the front pages of global media coverage. Blockchain came in first as cryptocurrency and then smart contracts got in the way with Ethereum. […]

[…] This is almost basic for any blockchain platform that is built on a Proof of Stake ecosystem like Ethereum. Those staked tokens are used to drive the activities of the […]

Here is How the CyBall Metaverse is Altering Soccer - CryptoCompass

[…] The official introduction of blockchain expertise by way of the emergence of Bitcoin got here alongside different goodies which have taken the entrance pages of worldwide media protection. Blockchain got here in first as cryptocurrency after which sensible contracts received in the way in which with Ethereum. […]

[…] Space is a blockchain-based video game built on the Ethereum blockchain with VR capabilities where players can buy or import utilities like land and avatars, monetize them […]

[…] on it to enable entirely new types of 3D voxel-based, decentralized gaming metaverses backed by the Ethereum Blockchain.NFT Worlds is a collection of 10,000 unique worlds that make up a fully decentralized, massively […]

[…] we had cryptocurrency only in 2009, and then blockchain applications came in more when Ethereum was launched as a smart contract platform. This move revealed the potential of blockchain […]

[…] either have Polymons that are matured or release “soft minted” ones from the Booster Packs on Ethereum, Binance Smart Chain, or Polygon. These Polymons have several traits that make them unique and […]