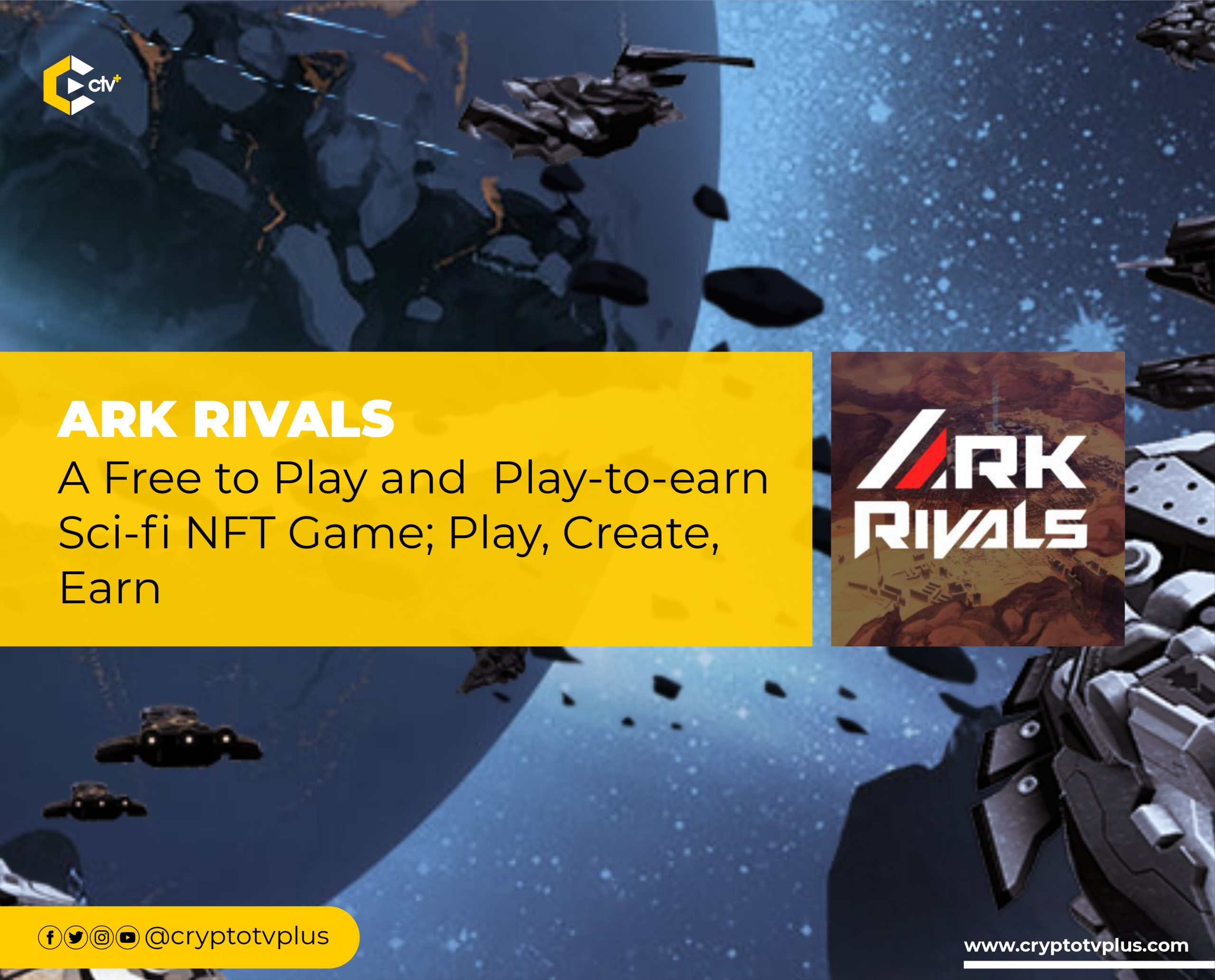 Developers are doing all good in turning beautiful storylines into simulations that appeal to the gaming audience. Play-to-earn games come in different character or avatar designs, from pets, ancient creatures, to human animations. The central character conveys the theme and locks the gamer’s interest. Such play-to-earn games as curated by CryptoTvPlus includes Blocksport, Crabada, Arenum, Blockchain Cuties, Endless Battlefield, Metarun, and many others.

Ark Rivals is a user-generated-content NFT game with a Sci-fi action strategy that allows players to play, create and earn. The Gameplay follows an attack and defense mode, players war with their airships and attack enemies and develops a strong base against other players’ attacks using the in-game resources. Ark Rivals is a free creative game that rewards the creativity of players when they participate in the game, buy land, buy $ARKN miner, or join Faction Wars.

What the project aims to achieve is communicated in its mission and vision statement.

Ark Rivals revolves around battles, building a UGC base, collecting resources, and evolving. To establish a base, players create buildings in their design and taste. The buildings are constructed using Gold, players mint Gold to erect their buildings, upgrade them and achieve a higher production rate.

Acquired resources through the player’s constructed mines are stored in the ark; the ark is the core of the base and must be improved to house the mined resources. Players defend their base using the in-game defense buildings, to shield the base from enemy attacks. The Land mines are the invincible havoc, shield generator protects in house structures from attacks, Bolt caster; “the electrocution”, Flame thrower doesn’t work for air units but is good at flaming up incoming enemies. For air unit targets rather use a Missile turret, Photon cannons are used against starships, the Mini turret is a barricade for enemies.

Weapons and walls are not enough to ward off enemies, the player creates their commanders, ships, and customized squadrons to defend their base or attack enemies. The customized squadron is the player’s soldiers, where the player is the commander controlling their ships and flagging their soldiers to attack enemy bases. Ships are in different types and parts, each has a unique skill and stat. Commanders have two levels of rarity: legendary and immortal commander.

Commanders not only go for war or attack, but they also go on missions to gather resources (Gold, Hyper fuel) with which to construct their ARK base. Player boosts their ships, commander, and soldiers with the in-game Hyper Fuel Pump. Gold and Hyper fuel are the in-game currencies, they are produced by Gold mine and Fuel mine respectively. Gem, also an in-game currency, is used to summon ships, commanders, and Arkadium, a powerful stone that possesses the ability to level up a player’s game power.

The player battle formation is tested in faction wars; a player versus environment global war where players purchase an NFT land in either of these 5 factions Mars, Jupiter, Saturn, Uranus, and Neptune to amass the faction resources and win wars. The war will last for 30 days. Players go on battles against other players attacking their bases and looting their resources.

Top 10 Celebrities that have bought NFTs

Most play-to-earn games are accessed through intending user stakes and initial game payment. Their design is often complicated and not user-friendly, requiring good game know-how before getting into them. Many projects have studied the market game barriers and put up strategies that ease gamers these difficulties. Ark Rivals proposes basic criteria with which they intend to bridge the gap of game access difficulty.

Play-to-earn games are backed by cryptocurrencies, they are used as in-game tokens to run the game ecosystem. As a requirement for most games, players are to purchase a certain amount of these tokens and stake them up to participate or a certain amount of the in-game token in the players’ wallet gives them participation access. Ark Rivals in their free-to-play and free-to-get model will allow players to get acquainted with the platform and play the game before any funds commitment.

NFTs are valuable when the holders understand the value. Ark Rivals is an NFT game that will help gamers in the platform get to the full knowledge of the power of NFTs through their community channels. This will give the platform users an insight into the value of the in-game NFTs they hold both in the game and outside the game ecosystem.

The earning mechanics of the ecosystem is summed up in Mining, Holding, and Rewards.

Mining: players can farm their in-game NFT items and push them for sale. Players who need them buy the NFTs, the seller earns by farming and selling out while the buyer earns by selling out the bought items at a later time.

Rewards: Players choose a faction from 5 planets of the world, these planets are engaged in battles. A player who chooses to represent their faction and brings victory to them has great reward awaiting them.

Holding: governance/voting, profit sharing, and staking are open to investors who hold $ARKN.

Ark Rivals have 5 in-game NFT items and each has different levels of rarity and a unique skill set.

Land: faction lands are limited, therefore players have to take double steps in getting themselves an NFT land in any of the factions.

The in-game token $ARKN is a Bep-20 token with a maximum supply of 1,000,000,000 ARKN. Confers on holders a reward for holding and an opportunity to contribute to the Ark Rivals ecosystem.

With a four-man manager team, a great board of advisors, and a production team Ark Rival is still at the early stage of her road map though enjoys the partnership of key investors. Polkastarter, Master Ventures, Bitscale capital, Jsquare, topebox, and Kardianchain; a Blockchain infrastructure in Vietnam and South Asia that provides Blockchain solutions to individuals and institutions.

Topebox is a game industry founded in 2012 and driving the force of the Vietnamese game development industry. Has to her credit over 55 games with a 9+ global reach.

How Relics from Monstercat is Changing the World of Music NFTs