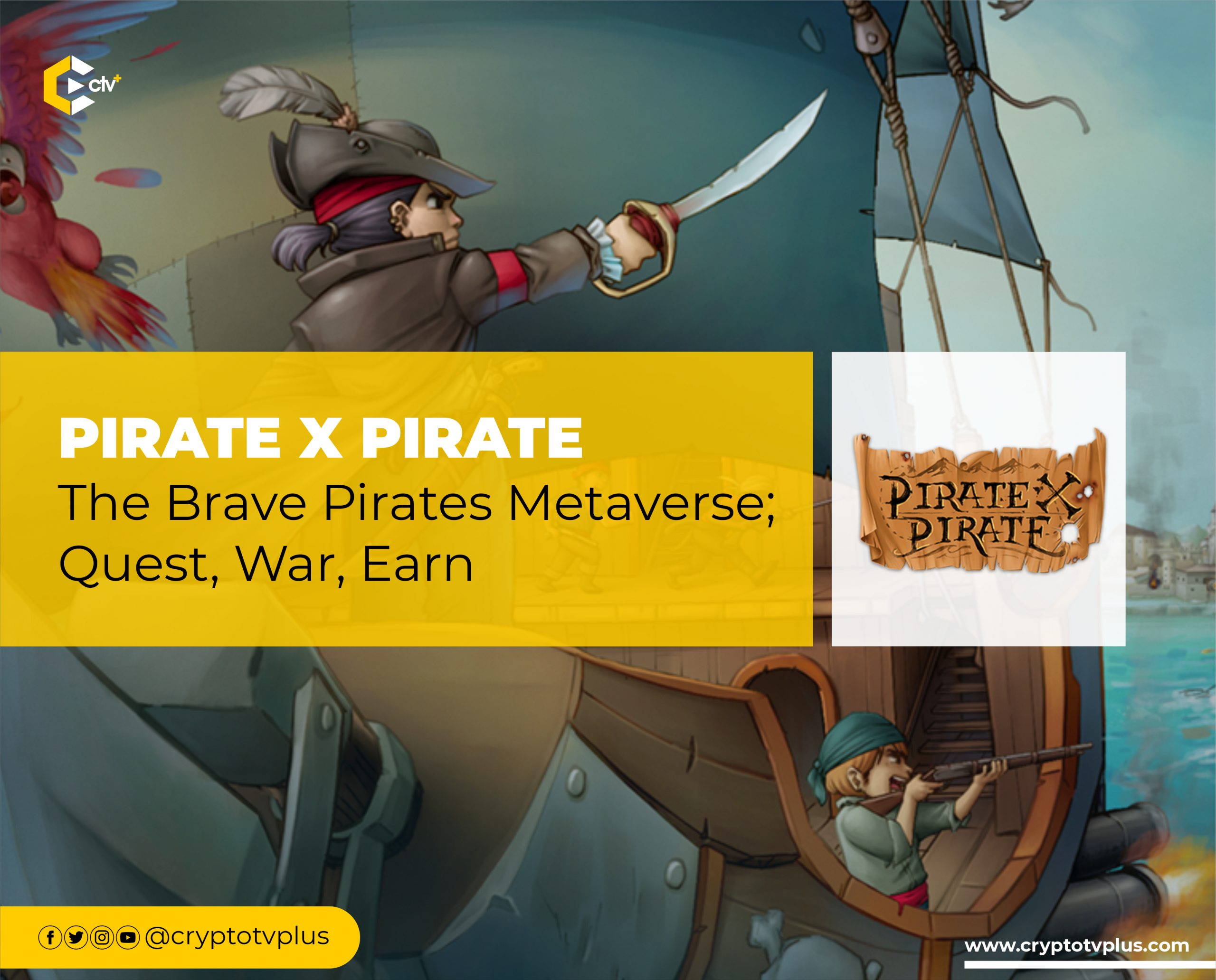 Before the new age of Pirates began, the Crookback Great Fleet had experienced a downfall which the Peacemaker Consortium leveraged, unleashing its power on the L’Armada and hoping to end the parade of Pirates. The treasure vault of the titular pirate captain, which is worth approximately half of the world’s wealth, was rumored by the Crookback Great Fleet. This rumor got the buds of looters wet and a new era of seafaring was born.

Pirate X Pirate is an NFT adventure game backed by Blockchain technology where players show off their looting skills against other pirates. There is the freedom to recruit a crew, form a fleet, and harvest resources. The Pirate X Pirate game is developed on Unity 3D engine and published by Siam Board Games.


How to Play: The Game Flow

Quest will be the first game mode to be launched on the platform. Players will be rewarded with $GOLD, the in-game token. In the Quest game mode, players (1 captain) deploy their ship (1 ship), form their crew (2 crewmates), and compound rewards which they claim after some time.

A player or a captain in a Quest carefully selects their crew and matches the right abilities; the crew’s skill contributes to the player’s rewards likewise the size of the ship. A small or big-sized ship is chosen depending on the quest type and time frame for completion. For a small-sized ship, it performs better in a short time and easy quests while big ships are deployed for quests with larger time frames to complete and more tedious quests. The more tedious and larger the completion time, the more the reward.

There are different ship sizes available for picks by pirates, each ship size is designated with a particular name; Caravel, Brig, Barque, and Carrack. The ships also have different time quests and minimum rewards they attract. Pirates going on quests are required of rations and maintenance depending on their ship size and quest time. The quest is not a smooth one, many hassles and tussles result in ship damage, therefore, ship maintenance is part of the basic requirements for quests. Each part of the ship costs differently to maintain and the maintenance cost is withdrawn from the pirate’s rewards before it is released for claims.

Rewards are due to be claimed after 5 days when claimed before 5 days attracts a tax. The tax is deducted from the reward before being claimed.

Pirates are notorious and the dangerous ocean monsters in the PVE gameplay match up with their actions. The PVE is gameplay where pirates battle enemy monsters hidden in diverse locations on the map. The battle can be PVE or PVP, pirates against pirates; a clash of strategy, and plunder skills.

This runs in a nonrandom turn-based dice battle, pirates take turns with their ready fleets and play each turn in these steps: The Roll phase; Roll dice, Reroll dice, Skill phase; Activate a matching skill, battle, and end turn. The dice can only be rolled a maximum of 2 times, each ship only possesses 6 dice.

The dice faces have different symbols that equal a skill. Cannon for Attack, Hammer for Heal, Defend, Wheel for Maneuverability, and Skull for Wild, Special.

The Pirates are rewarded with the ecosystem token $PXP. $PXP will have a total supply of 1,000,000,000. From the token distribution plan, 36% of the funds will be allocated to the ecosystem and rewards. This has the highest percentage allocation according to the plan.

Where to Play: Metaverse

Metaverse is a virtual world. The Pirate X Pirate metaverse is an adventure island for pirates. In the metaverse, there are lands, terrains, and buildings. The land/plot on the island are NFTs, pirates who own them can rent them out to other pirates. Mining resources are part of the metaverse adventures, resources mined from terrain are sent to another island as trades where they are used in manufacturing ship parts for new Quests.

Active users on the Pirate X Pirate metaverse are given the free hand to play with little investment in a game scholarship scheme. The scholarship is such that players who have discovered in-game NFTs and claimed them, can place them on rent and decide the reward split; the NFTs are in a set of 1 ship, 1 captain, and 2 crewmates. The scholar picks and plays, afterward the rewards are shared between the owner and the scholar.

The initial design of the game has it that Islands in the metaverse are not to be bought but claimed. Pirates explore the metaverse, search out the Islands on the map, take the battles and quest on the Island, if completed then claim the Island.

The ships for sails are NFTs, a ship is purchased as described in a ship plan and minted a few days before phase 1 of the game release phase. Ship parts are what make up a ship, the presence of each in a ship has a stat conferred on the ship that aids its performance. Ship parts include the Keel, the Hull, the Sail, the Deck, the Figure Head, and the Cannon. Flying Dutchman ship part, is a rarer NFT ship part than the rest of ship parts and has special abilities other ship parts don’t have.

The skills of a captain NFT are essential for the success of a quest or battle. Captain NFTs and crewmates are minted a few days before phase 1 of the game release phase, and presale is in the form of a “Wanted Poster”. Rare crewmates are determined by their abilities, the crewmates’ abilities could be Craftsmanship, Observation, Persuasion, and Combat. A crewmate can have more than one ability.

The team is currently on Q1 2022 in its Road map and has executed 9 out of 12 projects slated for Q1 2022, Initial Dex Offering being the recently carried out project.

The hands behind the Pirate X Pirate project has Pitsanu as the Chief Executive Officer, Sineephan as the Chief Marketing Officer, Nawapan Arampibulkit as the Lead Front End & BlockChain Developer, Jedsada Sriboonvorakul as the Lead Back End Developer, Kuanchewan as the Chief Technology Officer, Parithat as the Chief Design Officer, Prapach as the Art Director, Tuang Dheandhanoo as the Game Designer Advisor, and Pitt Apiratimai as the Economic Advisor. This team enjoys the partnership of a good list of partners, Siam Board Games, SBG Studios, R-390 Capital, Origin Ventures, and Game Starter.

[…] and can have a closed-door meeting with Illivium, MetaStrike, Genesis… Endless Battlefield, Pirate X Pirate, Mercha Morphing… the list is […]

[…] Infinity, DeFi Kingdom, Pirate X Pirate, Dogemongo are some of the awesome competitors in this genre. For DragonSB, the Terra blockchain […]