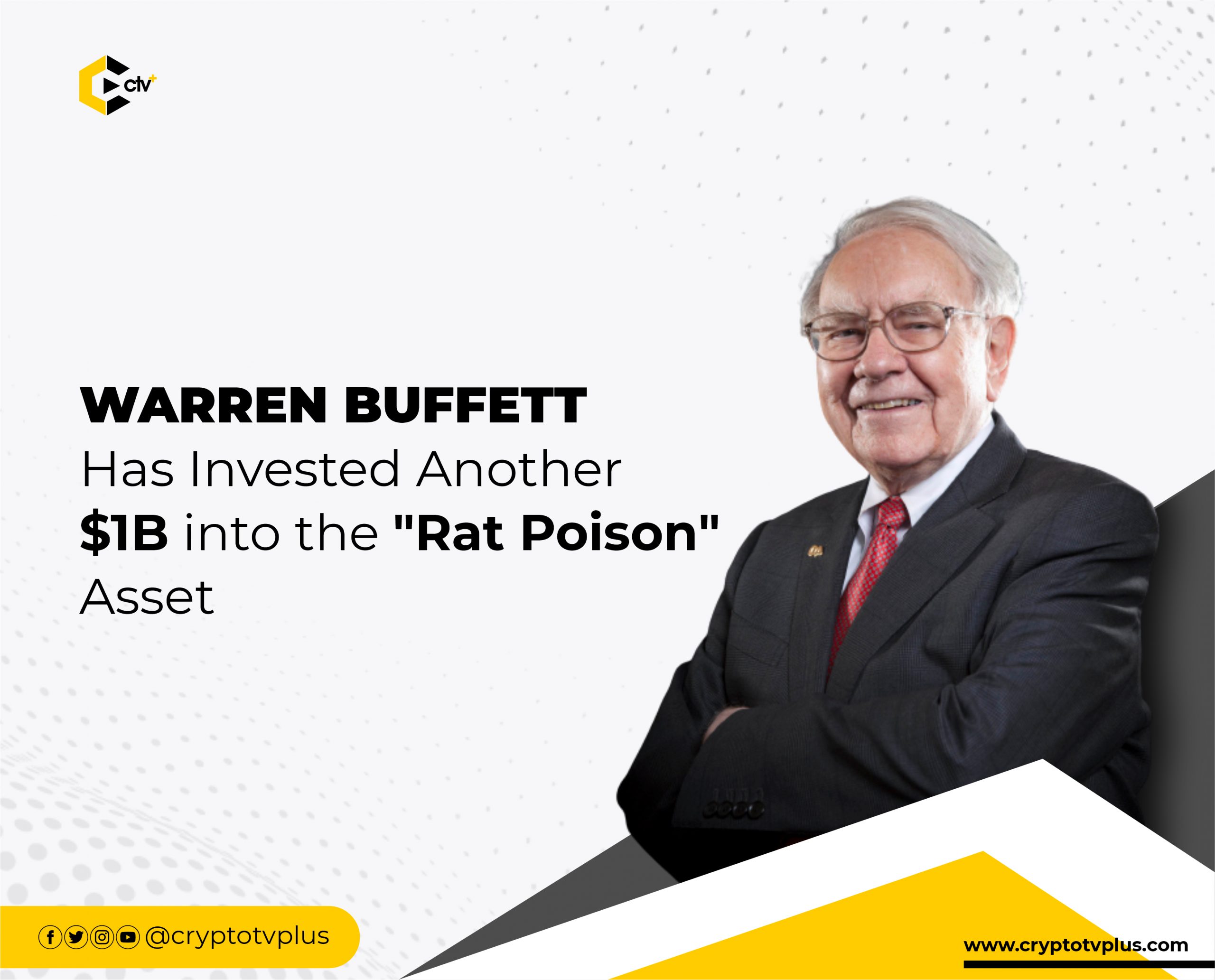 Warren Buffett Has Invested Another $1B into the “Rat Poison” Asset

You need to visit Africa, and my country, Nigeria, to understand what we call rat poison. We all know that rats are almost present in all continents but the ones in Africa, Nigeria, are so lovely but dangerous if not tamed. I was surprised to see that Hamelin, Germany; Guangzhou, China, and London, England are amongst the top ten places to see rats.

So, in a typical Nigerian home, you’d see that dad, mum, and children dread the creature because it can transmit Lassa Fever to anyone. Yet, some live on rat poison. What do I mean? You have men with wisdom to create good treats, mix them with fish and other substances to kill these creatures. Families flock to buy these poisons until it doesn’t work again. So, there is now a need for an upgrade.

There’s another “rat poison” that has been on the horizon since 2009. And it feels like it has been upgraded psychologically and it’s not targeted at rats.

First, I love the “Sage of Omaha” so much. Have not been with him physically but he’s awesome. A big thanks to him for all the wisdom on wealth and life he has given out. I respect him a lot. I wonder what would have been of Omaha if not for his dexterity. The years he’s spent are so exhilarating.

… for others who’ve been following the opinions of Warren on BTC, my question is this, what happened between that tweet above and Berkshire Hathaway Invests $1B in Brazilian Digital Bank Nubank, Reduces Mastercard, Visa Positions?

Before I go on, let’s remember that Nubank is Brazil’s topmost Neobank founded by Colombian, David Vélez, Brazilian Cristina Junqueira, and American Edward Wible in 2013. Since then, they have pulled through their competition to arrive at a $45b valuation when they went public on 9 December 2021. Shares skyrocketed with lots of goodies and more investors came in as well. Who does not love money? It’s a good ‘poison’ after all.

Let’s also be aware that some of the major investors of Nubank including Sequoia Capital, Founders Fund, DST Global, Tiger Global, and Goldman Sachs have pitched their tents against negative economics by investing in crypto-based opportunities. This shows that there is a strong tie between Nubank and crypto money. That reminds me, have you downloaded your Metamask Wallet?

If you still don’t see a line of touch between Nubank and Crypto, then why do they offer Bitcoin exchange-traded fund (ETF) products to their customer base from Brazilians to other Southern Americans? Perhaps, you’re seeing Bitcoin and not crypto. Well, Bitcoin represents the entire family. What happens to “Big Brother” will most likely “happen” to all cryptos.

The announcement of Bitcoin ETFs drove a strong wave across the globe on the future of crypto adoption. An ETF imitates the price of the asset it is linked to and here, we are looking at bitcoin. So, Bitcoin ETFs imitate the price of bitcoin and there are reasons why investors choose to have ETFs as against the asset itself. One of those reasons is that investors don’t have to worry about the trading process of bitcoin.

Apart from that, the security requirements of keeping bitcoins, making sure it’s safe and not lost are avoided. If you have crypto wallets as I do, you’ll understand this with the implications of losing your seed phrase. With these Bitcoin ETFs, investors will not be disturbed with crypto exchanges like Binance, Coinbase, and Huobi. Although, I love Binance. All they have to do is buy and sell their ETFs at traditional exchanges and markets.

Hope you’re with me?

One more vital advantage of taking Bitcoin ETFs is that if there are signals that the price of bitcoin will drop, investors can easily short sell shares of the ETF. I doubt if this is available in the current crypto exchanges we have. If it is, then it’s a new function. ETFs generally, are easier to operate than the volatile crypto assets that can make you rich at 17.59 GMT and poor by 01.00GMT. But is that enough to call it “a rat poison”?

So I’ll be correct to reiterate that Nubank has something to do with the adoption of bitcoins. Absolutely.

You can almost interchange Warren Buffet with Hathaway. I can bet that if he leaves Hathaway any time, we’ll see a bearish move on the price of the company’s shares. He has been the King, a true King. For Nubank and Hathaway, it was reported that in the early days of June 2021, the Omaha company invested $500m into the parent company of Nubank. Don’t be misled by the word “parent”. If the relationship between dad, mum, and a child is awesome, the love, joy, and investment will most likely be awesome.

Fast forward, just a few days ago, the same Hathaway invested another $1b into Nubank after removing $3.1b from Mastercard and Visa combined on Valentine’s day according to the SEC. What a gift to get on a lover’s day. But is it my money? It’s dad’s money… X2 of the initial investment.

Now let me ask: does it mean the June push was worth a new double push?… because I can’t tell why Hathaway did that investment, or preferably, why dad did that investment. But one thing is certain, repetition is a sign that belief is stronger. If Napoleon Hill said, “Any idea, plan, or purpose may be placed in the mind through repetition of thought” I’d take his words and only replace the last word, “thoughts” with actions.

Is Crypto Still a “Rat Poison”?

There’s no doubt that Warren Buffet understands the value of currencies. He’s not the only person that has a divergent view of cryptocurrency. However, it’s getting clearer by the day that an asset held by more than 81 million people and has opened a market that is worth more than $3 trillion shouldn’t be ignored.

For me, the fact that Warren Buffet has given his opinions on the asset as, “I don’t have any Bitcoin. I don’t own any cryptocurrency, I never will,”… “Cryptocurrencies basically have no value and they don’t produce anything,”… “probably rat poison squared,” … “mirage,” … “not a currency,” … “tulips” has nothing to do with the true value of cryptocurrencies.

Yes, there are issues to ponder over like the true value of crypto. He has raised certain questions that need to be looked at concerning the global financial market as well as from the perspective of an investor. And we don’t have to ignore those questions. Yet, it seems as though the behavior of the crypto market has been answering those questions daily with the numbers. Check for yourself.

And suddenly, dad, as we’ve seen, has indirectly invested in an “upgraded rat poison”. I hope you’re aware that $1b can buy a $300k home for more than 3000 American families with extra money left. That’s huge. So, I wonder if such money will be thrown into an endeavor or an organization that has a strong affinity with what was considered negative.

Another way to see this is that things change. Perspectives change. We know in part and we prophesy in part. Daddy Buffet has shown and spoken what he knows. And we know that he knows more. There will be no surprise if he wakes up tomorrow and gives us a new perspective on why he believes in cryptocurrencies.

In conclusion, for you out there, go and do your research. If you think that what Nakamoto(s), because we’re yet to ascertain if they are a group or a person, was able to do in 2009 is a joke or the introduction of smart contract, thanks to Ethereum, that has attracted a large number of Fortune 500 companies, is a joke or the over $3 trillion market value of cryptocurrency is a show of memecoins, then you might want to think again.

Right now, I can’t tell if dad loves crypto or the blockchain technology behind it or the two. I will be waiting to give a bullish shout the day CZ will verify Warren Buffett’s Binance account for him to start trading, staking, and perhaps doing P2P activities with the world as he joins us because we need to see more money, prestige, wisdom, and belief come into the crypto space.

Related Topics:BitcoinNubankWarren Buffett
Up Next