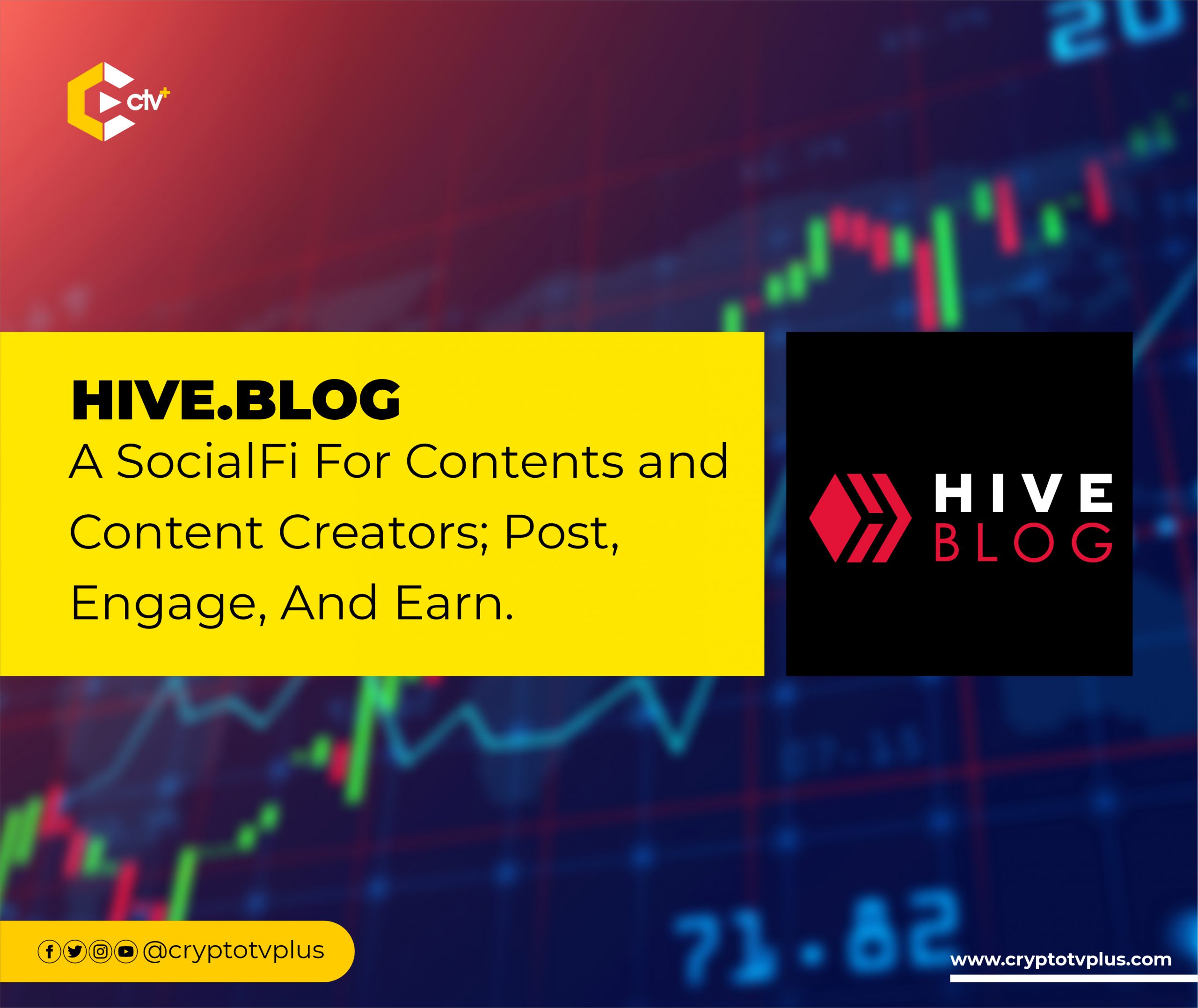 Hive.blog is a social economy powered by the Hive Blockchain and the HIVE cryptocurrency, where a user who creates and engages is rewarded for doing so. A community pool is created to collect newly minted Hive tokens to reward engagement and contribution based on the number of votes each content receives. Users holding more of these tokens in their wallets as Hive power will be given higher consideration in the reward pool distribution.

The platform operates on a point system. These points are rewarded as tokens that can be sold or bought on exchanges by initiating a buy or sell order. Users compete for rewards on the SocialFi platform by adding value to the platform and engaging in the value added by others. Engagement on the platform is primarily focused on gaining followers, making connections, and delivering high-quality content that, if consistent, will result in long-term rewards.

Account security is the next most important aspect of being a Hive.blog user. Passwords are used to login and, once lost, the account cannot be recovered, therefore, they should not be shared with third-parties to avoid jeopardizing account security. Each account has multiple keys that grant varying levels of authority or action; a memo key, an active key, a posting key, and an owner key.

Key Navigations to Note on Hive.blog

Promoted – Posts can be promoted on the platform to increase reach, visibility, and engagement. Hive Dollar payments boost these listings. Users can see promoted posts even if they do not follow the account; if the content is of interest to them, they can either follow or engage with the post.

Blog -The blog icon in the user account menu displays the content activities on the platform, including posts and reblogs. The blog navigation also allows a user to view their profile, which is visible to others.

Comments and Replies – Users can view and follow up on all the comments and replies they have made on other posts and contents, as well as all of the replies and comments made by other users on their posts.

Wallet – This takes a user to the wallet page, where they can view their wallet balance, transact, exchange HIVE or HIVE Dollars, manage their account, and power up. The wallet displays how many Hive Power, HIVE tokens, and Hive Dollars a user has in their accounts. Based on the current market price of HIVE, the wallet estimates the value of all tokens stored in the wallet.

Settings – All updates and changes are made in the settings. Toggle Night Mode navigation allows users to switch between light (day) and dark (night) mode themes. Users can exit their accounts by selecting the Logout option.

What To Earn and How To Earn on Hive.blog

Hive.blog users earn HIVE, HBD, and Hive Power. HIVE is the platform’s and Hive Blockchain’s main utility token, and it is a cryptocurrency token similar to Bitcoin. Hive Power is a type of HIVE token that measures a user’s influence on the Hive Blockchain. The more Hive power a user has, the more they can influence the value of comments and posts. Hive Dollars are stable tokens with a value of one dollar. Both HIVE and HIVE Dollar can be purchased or sold on exchanges.

Users who want to obtain Hive Power must first convert their HIVE tokens to Hive Power or convert their Hive Dollars to HIVE tokens before gaining access to Hive Power. A certain number of newly minted Hive tokens from the Hive Blockchain are allocated to a reward pool from which users who actively participate in the platform are rewarded. Content creators and curators receive 65 percent of the reward pool for posting and voting on the platform. Users with Hive Power are rewarded with 15% of the reward pool.

Posting– When community members upvote original content, the creator receives some rewards, which can be topped up with a portion of the reward pool if the post is upvoted.

Vesting– Hive power generated by HIVE tokens is rewarded with a small but significant number of new tokens.

Voting and Curating– When a user upvotes a post that has yet to become popular on the platform, they are rewarded with a curation reward that is proportional to the amount of Hive power the user possesses.

Purchasing– The platform made a Hive wallet available for users to make purchases and store their tokens. Tokens can be bought on exchanges or with other cryptocurrencies such as Bitcoin, Ethereum, or BitShares tokens.

Rewards on posts are available for a claim after 7 days of posting and are sent to the user’s wallet. If the user wishes to withdraw, there is a three-day withdrawal waiting period. Posting, commenting, and other engagements on the Hive.blog platform are free, as they are on most social media platforms, but the point of distinction is that it rewards users for their contributions, which qualifies it as a SocialFi platform.

Additionally, the platform protects the social and content sanity of its users by implementing a channel for reporting abusive content. Citation links are required for copied content, which allows for proper credit and avoids plagiarism, so users can be sure to access the original content.

What do you think of these articles? Share your comments below.