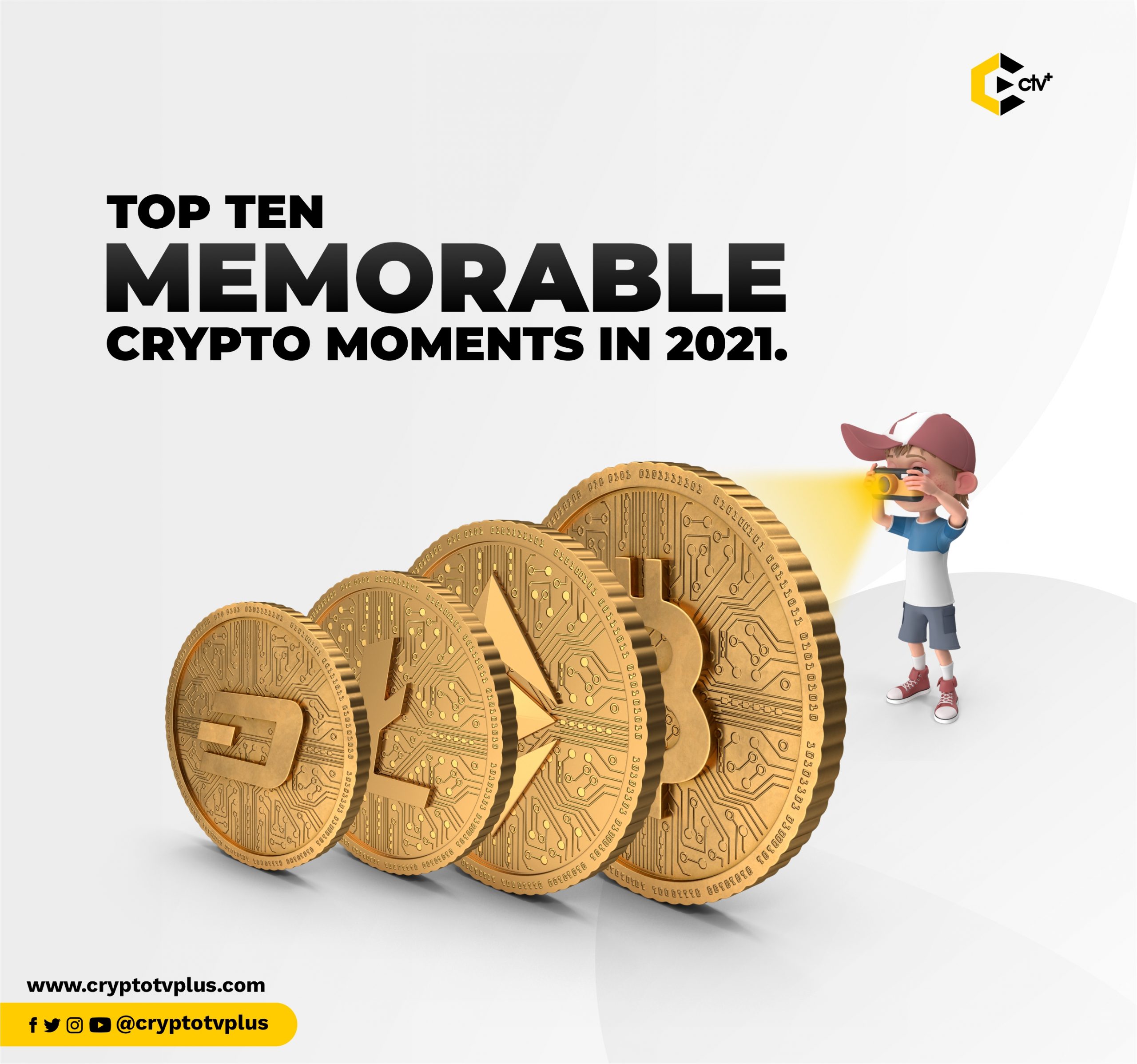 “What has been called by the international organisation as the Bitcoin experiment is nothing more than the world watching how mass adoption changes a country’s economy,” said the President of El Salvador, on Friday 24th December 2021. We all know that bitcoin is now a legal tender in El Salvador.

The world was thrown in shock when it was announced because so many are still placing bans on cryptocurrencies while another nation is declaring the same asset a means of exchange for everyone. What a year!

As we saw the end of 2021, a lot has happened globally especially as it relates to cryptocurrency. The case of El Salvador is amongst the topmost exciting crypto moments in 2021. Let’s take a look at other cryptocurrency headlines that made waves globally.

“Dogecoin might be my favorite cryptocurrency. It’s pretty cool,” Musk replied in a tweet responding to a poll initiated by Dogecoin’s official Twitter account on April 1 requesting for a CEO for the cryptocurrency – if it ever needs one.

Before that time, the CEO of Tesla has shared his lack of support for Bitcoin for certain reasons. However, he changed his view later on the cryptocurrency.

The latest “Musk Effect” occurred on the second Tuesday of December 2021, when he announced that customers can buy some merchandise from Tesla using the coin. Daily, and weekly, Elon Musk continues to be a major influence in the crypto community and the fans love the trend.

The buzz around NFTs was outrageous after Beeple sold an NFT for $69m on March 11, 2021. Until then, NFTs were not truly valued. They were seen as JPEG pictures and so shouldn’t be as expensive as that. For certain reasons, many are not aware that creating an NFT requires minting it and the minting costs money. Here’s a snapshot of a TikTok video of a teenager and a gift for the mother…

Currently, “The Merge” is officially the most expensive NFT sold at more than $90m. Fad or real asset?

China is hostile to cryptocurrencies.

The September 2021 ban on crypto by the Chinese government made bitcoin prices fall by more than $2000 according to bbc.com. As of 2019, China accounted for more than 75% of global bitcoin mining but had to cut off transactions with any cryptocurrency because the currency was not and still not regarded as true money. Apart from the monetary character of crypto, energy usage is another reason for the clamping and has caused huge migration of miners and closure of mining farms. Banks were also asked to desist from enabling crypto transactions for citizens.

However, the global community can still feel the activities of Chinese investors in the crypto financial market. Hopefully, 2022 will open the door again for crypto in the world’s most populous nation.

Bitcoin reached an all-time high of $68,000 around 9 November 2021. The rally increased the trust many had in the disruptor of the financial market. Its impact was felt on all cryptocurrencies as it was a bull market for the crypto world.

There are a lot of suggestions that it will go beyond $100,000 in 2021 but that’s not feasible seeing that the year is almost over. However, bitcoin holds a lot of promise for the future.

Jack, the then CEO of Twitter, is an ardent believer of the disruption cryptocurrency is causing globally, especially Bitcoin. So, when the news about the Bitcoin payment integration came in, it was in line with what was expected by Twitter users. The feature was made to enable users who do not have access to cash to make monetary transactions in Bitcoin. Although it’s just accessible for iOS users while Android users wait for theirs. Strike payment software built on Bitcoin Lightning Network will be used for the transaction.

Integrating NFT verification was also part of the plan the social media platform has for its users who utilize Twitter as one of the main communities for global cryptocurrency rallies.

Global crypto theft is on the increase.

One of the biggest threats to the Cryptocurrency world has been security. Despite the assurance given by the architecture of blockchain technology, people can still hack into accounts and steal people’s money. For most of them, they come as scam schemes where people are shown a program for them to be part of only to realize that it was designed to access their accounts. In 2018, crypto thefts, scams were at $1.7 billion according to Reuters New York.

That number has risen through 2019, 2020, and in 2021, it’s pegged at over $7.7billion based on the Crypto Crime Report released on 16 December 2021. Any innovation will always have its downside, so also crypto. We just have to be careful.

Indian Prime Minister Narendra Modi’s Twitter account was hacked on Dec.12, 2021, at around 2 am. In 2020, we saw a similar situation happen when the hacker asked that cryptocurrency as donations be sent to a private wallet. The 2021 hack was used to send a message saying that India had made Bitcoin a legal tender and there was a plan to give over 500 bitcoins bought by India to her citizens. Steps were taken immediately to restore the account and they did. So far, there’s no news of anyone that was defrauded.

Jack and Jay Z invest in Africa for bitcoin development.

Bitcoin development garnered more support as Jack and Jay Z created an organization that will oversee the development of Bitcoin in India and Africa. The first phase of the project started with the selection of four team members – three from Nigeria and one from South Africa. Africa and India have shown good drive for the adoption of cryptocurrency and there also exist good talents that can drive the integration into day-to-day usage to bring about more prosperity for Africans.

What would you do if you had a dinner invite with the famous, anonymous, Bitcoin creator, Satoshi Nakamoto? Craig Wright has come out to claim he is Satoshi Nakamoto to the world. He had a court case with a fellow businessman that made the news of his declaration go far. He won the case but had to pay compensation to the family of the deceased. Despite his claims, the crypto community is very skeptical about his identity as he’s not made any change to the Bitcoin believed to have been mined by Satoshi.

The year has been more dramatic than we expected due to the rise of the disruption in almost all aspects of our lives starting with the basics – money. Cryptocurrencies have given individuals and certain organizations the power to print their money. We await more dramas in 2022. The US has taken a good step by introducing 35 bills focused on Crypto policy with attention on cryptocurrency regulation, applications of blockchain technology, and central bank digital currency (CBDC).

On the 5th of February, 2021, the Central Bank of Nigeria released a circular prohibiting financial institutions from facilitating cryptocurrency transactions. This circular directed banks to investigate and close down accounts of individuals or corporate entities involved in cryptocurrency.

Despite the summoning of the CBN Governor, Godwin Emefiele to the Nigerian Senate, the CBN remained resolute even until this day.

Few months later, the CBN announced its intention to launch it’s digital currency – the eNaira and this after some challenges was launched in October.

For the year, we’ll see more exciting events as we keep making changes to adjust to the new realities presented to us.

Related Topics:2022
Up Next