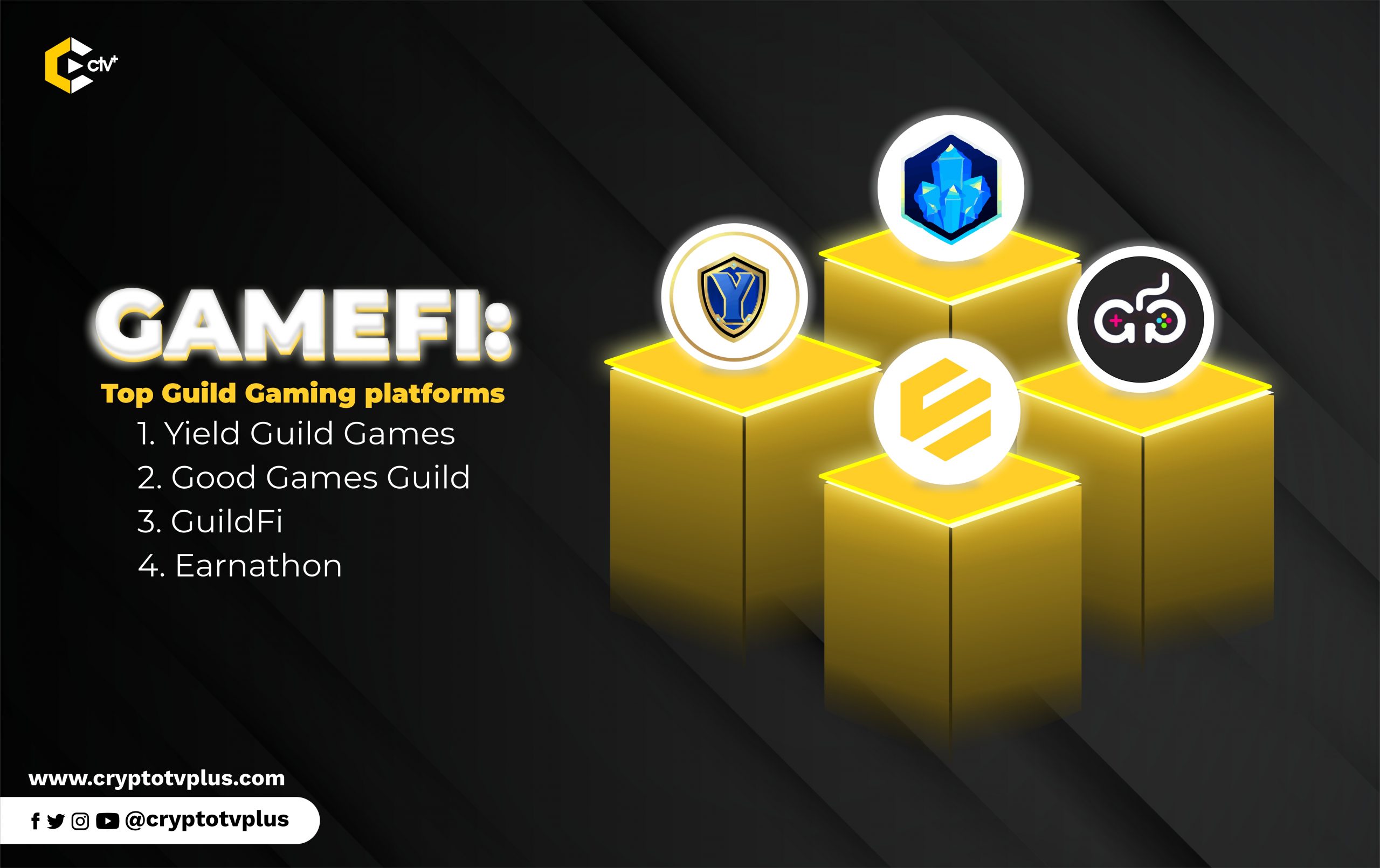 In video games, a clan, community, guild or faction is an organized group of video game players that regularly play together in one or more multiplayer games.

Many clans take part in gaming competitions, but some clans are just small gaming squads consisting of friends.
Let’s consider some guild games on the blockchain.

The mission of Yield Guild Games (YGG) is simple: we want to onboard millions of players from around the world into the “play-to-earn” revolution.

The idea was born from observing how Axie Infinity happened to popularize the idea of play-to-earn with the release of the Small Love Potion (SLP) token, an in-game resource that can be earned by winning matches.

Since SLP is an ERC20 token, it can be exchanged for ETH or other tokens in Uniswap, and eventually cashed out for fiat.

The real test for this new concept was when the COVID-19 pandemic hit, and people without any background in crypto started signing up for Axie for a chance to earn some money.

As can be seen in this Coindesk article, playing Axie became a viable, alternative source of income in the Philippines and other countries that were suffering from massive unemployment during the COVID-19 crisis.

In many cases, playing Axie Infinity can even beat a full-time wage in several developing nations around the world!

The development around Guild gaming has been profound. In the first few weeks of operation, there have been more than 500 gaming scholars that were trained by Yield Guild.

It has continued to make very much progress and it’s partnerships have increased drastically.

Partnership includes League of Kingdoms; Axie Infinity; Sandbox; Beta Zed and a couple of others.

Good Games Guild is a Gaming Hub that aims to create the largest virtual world economy by optimizing its owned assets to get maximum reward generated.

We believe the future of gaming will be on the NFT & Blockchain technology, so we carry the mission to become the biggest hub for virtual world economy, NFT Gaming Community and Marketplace.

The guild is in favor of the idea that users deserve the finer things, thus everyone can and should earn money from gaming. Similar to the Yield Games Model, players can apply for scholarships where they are trained on how to play, supported to start playing and then can do an income share with the company.

They aim at maximum development of the gaming industry and this model seems to suit just fine.
There is the Rent to Earn option too for players that may seem too busy to actually play the game.

They can rent out their assets so others can play with those and they do earn from their winnings.
The platform also has the staking option. This is where players who hold the native token – GGG – can stake and earn interest on their tokens.

GuildFi aspires to create an interconnected ecosystem of games, NFTs, and communities, to maximize players’ benefits and enable interoperability across the metaverse.

They solve the discovery and access problems for players while enhancing their performance and maximizing their rewards.

Players’ engagement and achievement are no longer discarded and limited to specific guilds or games, but instead, contribute towards their ranks and elevate their benefits in the long run.

Gaming guilds have proven themselves to be an effective onboarding vehicle for this new gaming era.

Thus, the guild foresees multiple forms of gaming guilds that cater to different types of players, from play-to-earn to social guilds, many more gaming projects and a more comprehensive range of NFT assets across the metaverse in the near future.

With that, we set out to connect the intricate jig-saws of gaming communities and the metaverse, GuildFi.

GuildFi although relatively new, they are still among the pioneers of guild gaming.

It is to end noted that recent developments put Guild gaming on a very promising path.

Considering that it could give an active income to residents of developing countries, it’ll be a welcome idea to help reduce dependency.