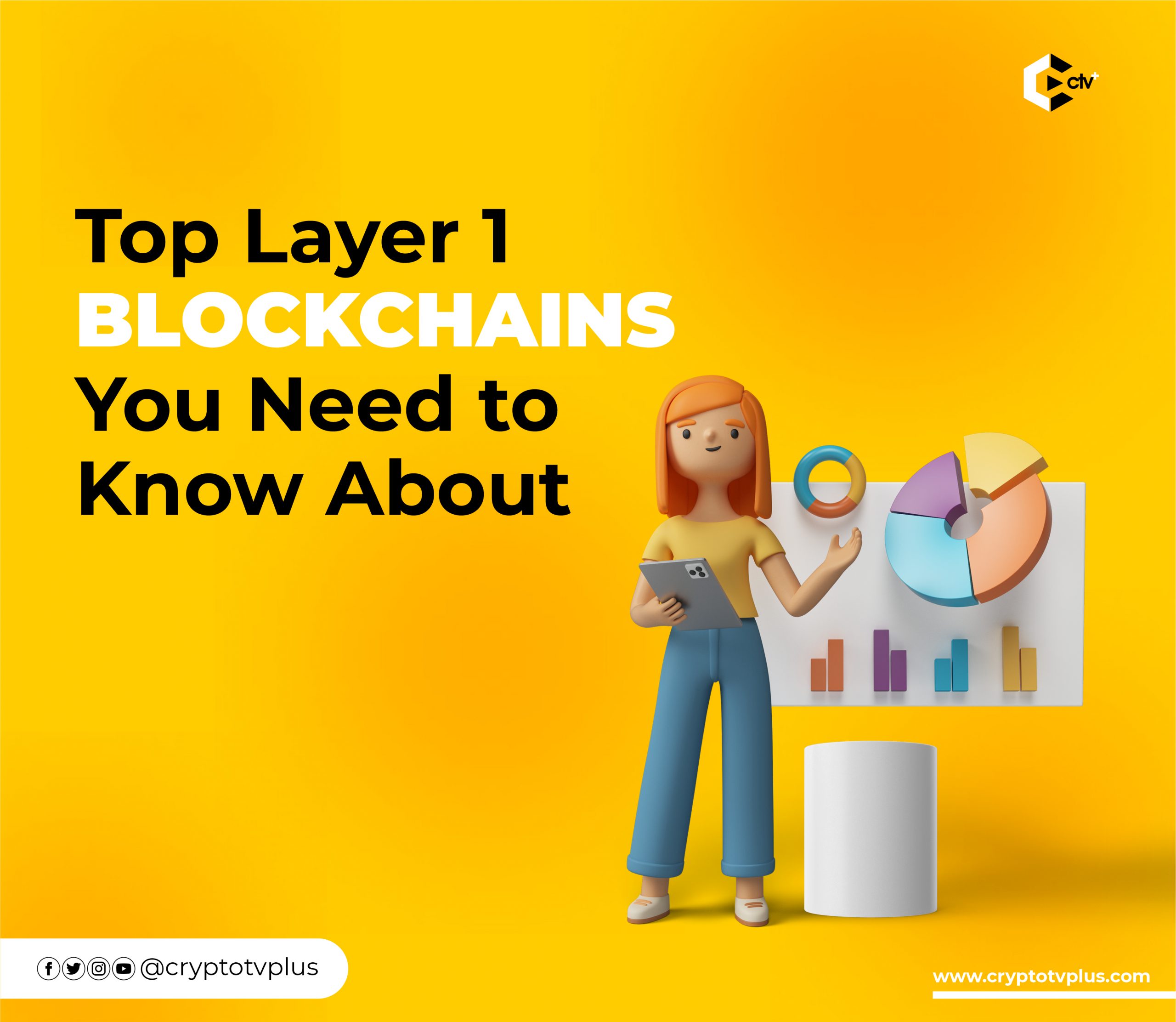 Top Layer 1 Blockchains You Need to Know About

Blockchain technology is the combination of about three different systems to create a compact structure that uses the advantages and disadvantages of the three systems. These systems are, “Cryptographic keys, a peer-to-peer network containing a shared ledger – a means of computing, to store the transactions and records of the network,” according to Simplilearn

This combination brought about flexibility, offering ways of creating, sharing, and storing data. However, the combination is not perfect since most times, a blockchain platform that’s being created has to deal with the trilemma challenge in the system. Two elements of the trilemma are scalability and security.

To find a way to make blockchain technology easy to use for everyday life activities, there has been the need to build more flexible and scalable blockchain platforms as Layers 2 and 3. This ease is tied to how scalable and safe the system is. So currently we have about three kinds of blockchain platforms according to the Layer description: Layer 1, Layer 2, and Layer 3.

Differences Between the Layers

Layer 1 blockchains are those systems built on the “raw” blockchain itself with basic functions like carrying out transactions. A typical example is Bitcoin. Then Layer 2 blockchains are protocols built on a Layer 1 structure to solve the speed and cost challenges. Liquid Networks and Lightning Networks are perfect examples.

Layers 3 comes as the easiest use case of blockchain technologies. This is where you have games, decentralized finance (DeFi) apps, and distributed storage apps. One very unique ability of Layer 3 blockchains is that there is cross-chain capacity allowing users to interplay with more than two platforms or apps.

Although, there’s been advancement in the creation of more Layer 2 and Layer 3 platforms, let’s see some of the top Layer 1 platforms:

Blockchain possibilities were opened when Bitcoin was launched in 2009 by Satoshi Nakamoto. Since then, it has experienced so many forks due to developers as well as users trying to find a solution to the scalability challenge of the network. It uses Proof of Work Consensus to verify transactions and create new blocks in the Bitcoin ecosystem.

As for being a layer 1 blockchain, it is highly secured, being the most difficult to hack. This is one of the greatest strengths of Bitcoin. The native coin on Bitcoin is bitcoin, which is represented by BTC and is trading a little bit higher than $39,000 as of March 7, 2022. There will not be more than 21 million BTCs mined controlling the inflation of the asset.

It was launched in July 2015 as a separate blockchain platform. Although, the structure and inspiration behind it were from Bitcoin and other earlier works. It uses the Proof of Work model like Bitcoin. Ether (ETH) is the native coin of the platform.

Ethereum gave the blockchain community the first opportunity to build products on a blockchain network. This is where smart contracts come to play and a project with a project like Polygon is a good example of a blockchain platform built on the Ethereum network.

The major problem of Ethereum is the consensus mechanism. There are plans to migrate to Proof of Stake protocol but with concerns on decentralization and security. From the time of the London fork of Ethereum, part of the transaction fee has been burnt making the availability lower.

Algorand was founded in 2017 but launched its mainnet and the ALGO token two years later. With its Pure Proof of Stake mechanism, the blockchain is more secure than other POS platforms. Validators are chosen at random so that it is hard to predict who’d be the best validator despite the number of tokens staked.

The major advantages of Algorand are the decentralization structure, lesser time taken for verification, harder for forks to occur in the system, lesser gas fees, community-driven, and has a very good experienced team leading the project.

Cardano was founded and released in 2015 and 2017 respectively by one of the Co-founders of Ethereum, Charles Hoskinson. The blockchain that uses the Proof of Stake Ouroboros consensus mechanism is built using five different stages as the focus: foundation, decentralization, smart contracts, scaling, and governance. ADA is the native token of the network.

Cardano gives attention to enterprise dApps that can help organizations access blockchain tools easily. Examples are Atala PRISM, Atala SCAN, and Atala Trace. Some of its advantages include being an environmentally friendly green product, its two-layer architecture provides more efficiency than other platforms.

Other strengths are that it uses the Cardano Clearing Level that allows users to pay very low fees trading ADA very fast. Smart contract capabilities are also functional on the blockchain.

This guarantees that timing and the order in which transactions are carried out are maintained even when the process of verification is delayed. HBAR is the native currency of the platform.

Hedera is one of the few-layer platforms without the scalability challenge. It has a very fast finality of five seconds or less, a transaction fee of less than a cent can carry out smart contracts operations, TPS of 10,000, and applies Proof of Deletion system for the storage of files.

This sharded multichain network (can process transactions from many chains at once) was launched in May 2020 by Dr. Gavin Wood, Co-founder of Ethereum; Robert Habermeier and Peter Czaban. Polkadot was conceived to be the internet of blockchains allowing interoperability between chains easily.

The four components of Polkadot: Relay Chain that creates “consensus, interoperability and shared security across the network of different chains,” according to coinmarketcap; Parachains for independent chains that can operate differently; Parathreads for temporal joint security partnership with other chains, and Bridges for connection between parachains or parathreads and external blockchain platforms.

For the first time, Solana introduces the Proof of History mechanism for validating transactions and the production of blocks into the entire blockchain ecosystem. It is one of the fastest blockchain platforms and almost like a good replacement for Ethereum.

Thanks to Anatoly Yakovenko, who is tagged as the main personality behind the Solana blockchain. After working with Qualcomm, he started Solana Labs as a product of a project he was working on. Later on, a few colleagues from the same company joined him.

Fast transactions with TPS of 50,000; low transaction fees; one of the largest futures markets; NFTs and smart contracts compatible… are some of the strengths of the Solana network. One major downside is that it is not truly decentralized compared with Ethereum that has over 200,000 validators.

Binance is an authority in the crypto space having a CEX, inbuilt wallet, launchpad… all built on the Binance Smart Chain. The progress each of these utilities has made gives a clear description of its capacity.

Binance Smart Chain was developed when it was discovered that Binance Chain couldn’t deliver optimally for users. BSC, which is EVM compatible, made it possible for developers to transfer their projects from Ethereum to BSC to take advantage of the speed of the blockchain.

It uses the Proof of Stake mechanism where BNB can be staked to be part of the validators of the network. One greatest advantages of BSC is that the ecosystem has a full option for whatever you want to do. From Binance CEX to PancakeSwap and more. Once you get to BSC, you might need no other platform for operations.

Terra was founded by Daniel Shin and Do Kwon in January 2018 and launched the mainnet in 2019. The project was inspired by a drive to see mass adoption of blockchain technology with a focus on the price and stability of cryptocurrencies.

The native currency is Terra (LUNA) with an ATH of $103.3 and ROI of 4711.3%. Proof of Stake is the mechanism used to secure the blockchain that “seeks to set itself apart through its use of fiat-pegged stablecoins,” says coinmarketcap.com, by combining, “the borderless benefits of cryptocurrencies with the day-to-day price stability of fiat currencies.”

CRO is a product of crypto.com launched between November and December 2018. The focus of the team, Kris Marszalek, Rafael Melo, Gary Or, and Bobby Bao, was to cover up the gap of payment systems for users of the crypto.com platform.

Cronos Chain is built on the Cosmos SDK, which functions with a proof-of-authority (PoA) consensus mechanism. It is Ethereum Virtual Machine (EVM) allowing projects to be successfully moved to and fro from Ethereum, BSC, and other EVM compatible platforms.

Apart from the above-mentioned blockchains, Fantom, Centrality, NEAR Protocol, Avalanche and TRON are other powerful layer 1 structures. While there are a few Layer 1 blockchains that are great with efficient use cases, there is a huge need to build more Layer 2 and 3 structures. As more people get to know about blockchain, this becomes more eminent.