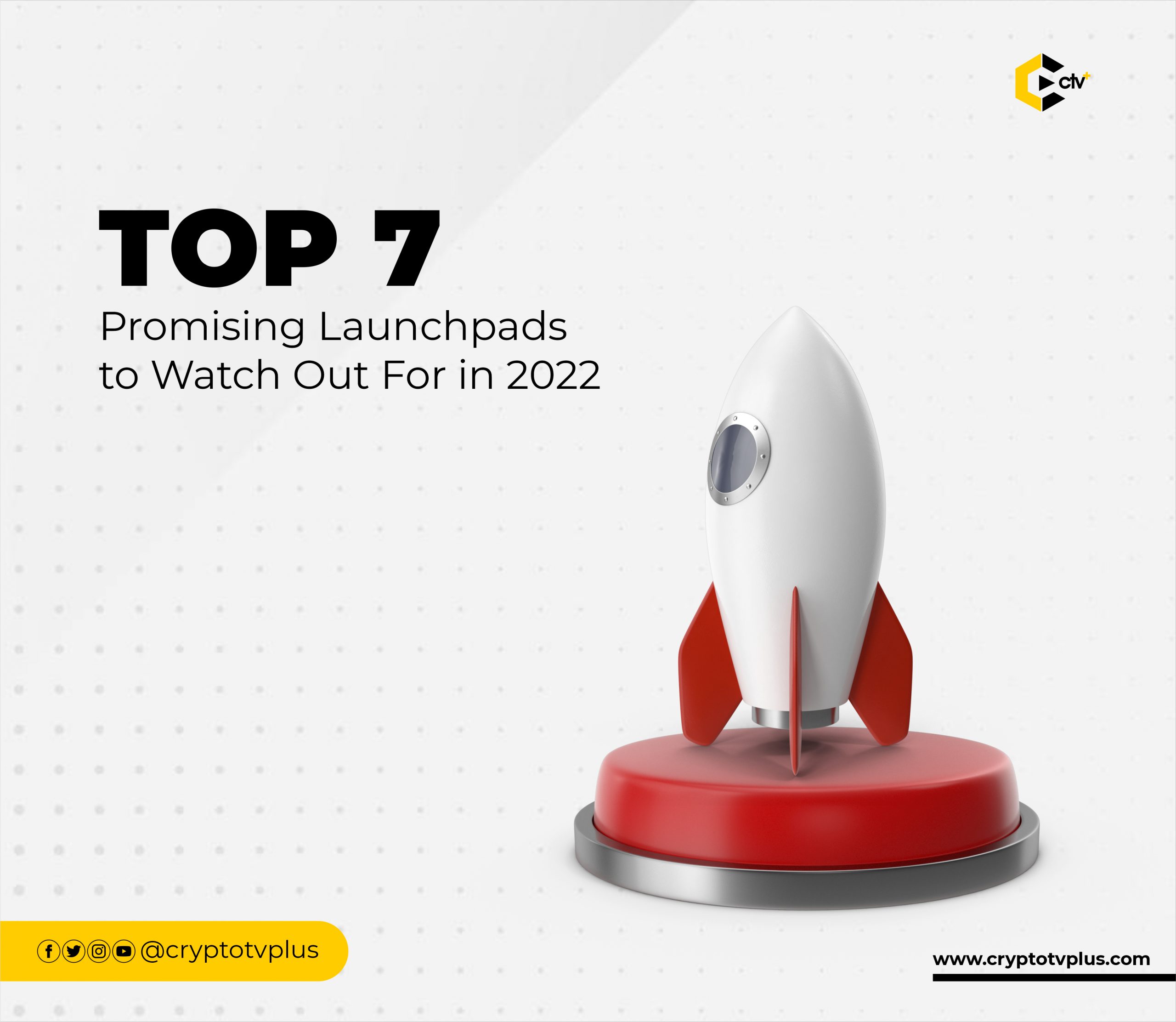 The outburst of crypto coins reached 10,397 in February 2022. In 2021, February, that figure was at 4,501 while in March of 2017, it was lower at 1,658. Apart from crypto coins, there have been other projects with unique expressions of the structure of blockchain applications: games, borrowing, lending platforms, and metaverse platforms.

As the numbers of these projects increased, it became obvious that just like in the typical TradFi ecosystem, many startups couldn’t raise capital for their projects. And beyond that, the architecture of DeFi is different from TradFi making it eminent to create a system of raising liquidity for these projects quickly and easily. This is where launchpads come into play.

“A launchpad is any platform that is designed specifically for launching new coins, crypto projects, and raising liquidity,” said Kene, a Blockchain Enthusiast. Launchpads are directed at helping blockchain projects in three major ways: help to raise liquidity for blockchain projects, provide community around projects and act as a vetting instrument for projects. Once a project is launched from a launchpad, its authenticity is almost guaranteed.

Here is a list of the top seven launchpads released in 2021:

GameFi is a launchpad built on the Binance Smart Chain to help blockchain projects raise liquidity for the launch of successful projects. It’s termed one of the most successful launchpads on BSC with high ROI.

The ecosystem consists of a Launchpad, an Accelerator, an Aggregator, a Global Market, and a Yield Guilds. These utilities make it easier for projects to be launched, liquidity raised and a massive outreach achieved to a lot of people.

Tribe, Bunicorn, and Step Hero are some of the super projects on the Redkite launchpad. The Red kite launchpad is owned by investment firm Icetea Labs and one of the aims of the project is to create a system that permits cloning and customization of Red Kite to suit the need of the project launched on the ecosystem.

Red Kite is built on PolkaFoundry which is “a one-stop dApp factory providing interoperability with DeFi and Web 3.0 ecosystems by leveraging the Polkadot multi-chain blockchain,” according to icodrops.com

Seedify is a launchpad for game projects on the Binance Smart Chain. Games like SIDUS HEROES and Ertha were launched on the Seedify network. SharkRace Club, Nomad Exile, and Gaimin are upcoming projects to be released on the platform.

With a Telegram Group of more than 70,000 users, a Channel of over 200,000 subscribers, and above 600,000 Twitter followers, it has a robust ecosystem of ready-to-buy gamers and investors that will quickly be interested in any project launched on the platform.

The team behind the project that has held 47 TGEs raising to $ 12.84M with a participation of more than 2000 persons is made up of Levent Cem Aydan, CEO; Helen Petriashvili, Senior Business Development Manager and Raíssa Meira Gomes, Digital Marketing Manager.

Binance remains one of the best platforms in the blockchain industry. It has a centralized exchange, in-built wallet, Binance Smart Chain and then the Binance Smart Chain Launchpad called BSCPad. This project has hosted more than 60 launches since inception with an average launch of six every month.

The Binance team is behind the development and launch of the project that was released in March 2021 and since then so many other platforms have come up emulating the success of BSCPad. It is the seventh-largest launchpad raising more than $12m till date.

Some of the best IDOs it has hosted include Revomon, Medabots, GameZone, and AstroSwap… achieving over 100x price growth of some of the IDOs. Another unique advantage of BSCPad is that it offers a lottery tier and a guaranteed allocation tier for projects that are launched on the platform. This makes it easier for teams to launch blockchain projects on the platform.

BSCPad token is the native token of the platform which is compatible with BNB. And can be bought on Binance CEX, Gate.io, and Pancake Swap. With a minimum of 1,000 BSCPad tokens, anyone can participate in the platform.

TrustPad is one such platform that integrates cross-chain technology, allowing a project to use several networks in its development at the same time. Solana and BSC are two typical examples of platforms with the same property.

The average launch on TrustPad is 3 to 10 IDOs per month with 11 levels of launch for users. In the IDOs market, this number is one of the largest, allowing enough opportunity for launchers with different levels of income to participate in the TrustPad ecosystem. The ecosystem has experienced 78 TGEs while raising to $11.33

Launching on TrustPad requires a minimum of 3,000 TPAD tokens which is the native token of the platform. Some of the projects released on TrustPad include ENATE, Babylons, NetVrk, PolkaFantacy, Bloktopia… Nest Arcade, Animal Concerts, Colizeum, and Drunk Robots are some of the upcoming projects.

The name of the PAID Network Launchpad is Ignition Launchpad. In PAID Network, users have access to the web and mobile applications that leleado the platform. That’s a huge plus seeing that most DAOs don’t give this unique opportunity.

Ignition Launchpad has attracted huge global crypto brands like Binance, Brilliance Ventures, DuckDAO, Master Ventures, Alphabit, and Kylin in the development of its ecosystem. These gestures have raised for the platform more than £15m in investment capital.

Thetan Gem [THG], Star Atlas [ATLAS], AIOZ Network [AIOZ], BeyondFi [BYN], and Star Atlas DAO [POLIS] are some of the projects on the Ignition Launchpad. There have been about 74 TGEs done with over $19m raised for startups. PAID token is the native token in the platform. Since the PAID Network is integrated with BSC, all projects on Ignition Launchpad have the same cross-chain access.

Here is the first launchpad in the Solana network which attracts about 30,000 in each IDO launched on the platform. To participate in any project, the users must have the native token xSLIM with access is to launch any approved project in any of the five tiers levels listed in the procedure

The advantage of Solana (processes more transactions per second, lower gas fees, uses POS and POH,) is amongst the strengths that projects on Solanium enjoy. Solanium has hosted 26 TGEs where $9.83m was raised.

Several projects have been released on Solanium including Project SEED (SHILL), Cryowar (CWAR), DeFi Land (DFL), Solice (SLC), and Port Finance (PORT). You can get the token on any of these exchanges Gate.io, MEXC Global, KuCoin, LBank, Raydium, CoinEx, Hoo, and Decoin.

The number of Launchpads coming up will continue to increase with more demand for new projects every day. Luis Aureliano, a Financial Analyst speaking about this said, “After several previous iterations, IDO has become the de facto token offering mechanism, providing projects with a route to token liquidity. IDO tokens also offer an excellent way for investors to get in on the ground of a project.”

For the average user who wants to invest, it’s important to do your research so well before taking any step. “IDO tokens can have a high risk-return ratio,” Luis continued, “so they aren’t necessarily suitable for beginner or casual traders… Buying IDO tokens isn’t a passive activity – it involves significant research to find the most promising projects.”