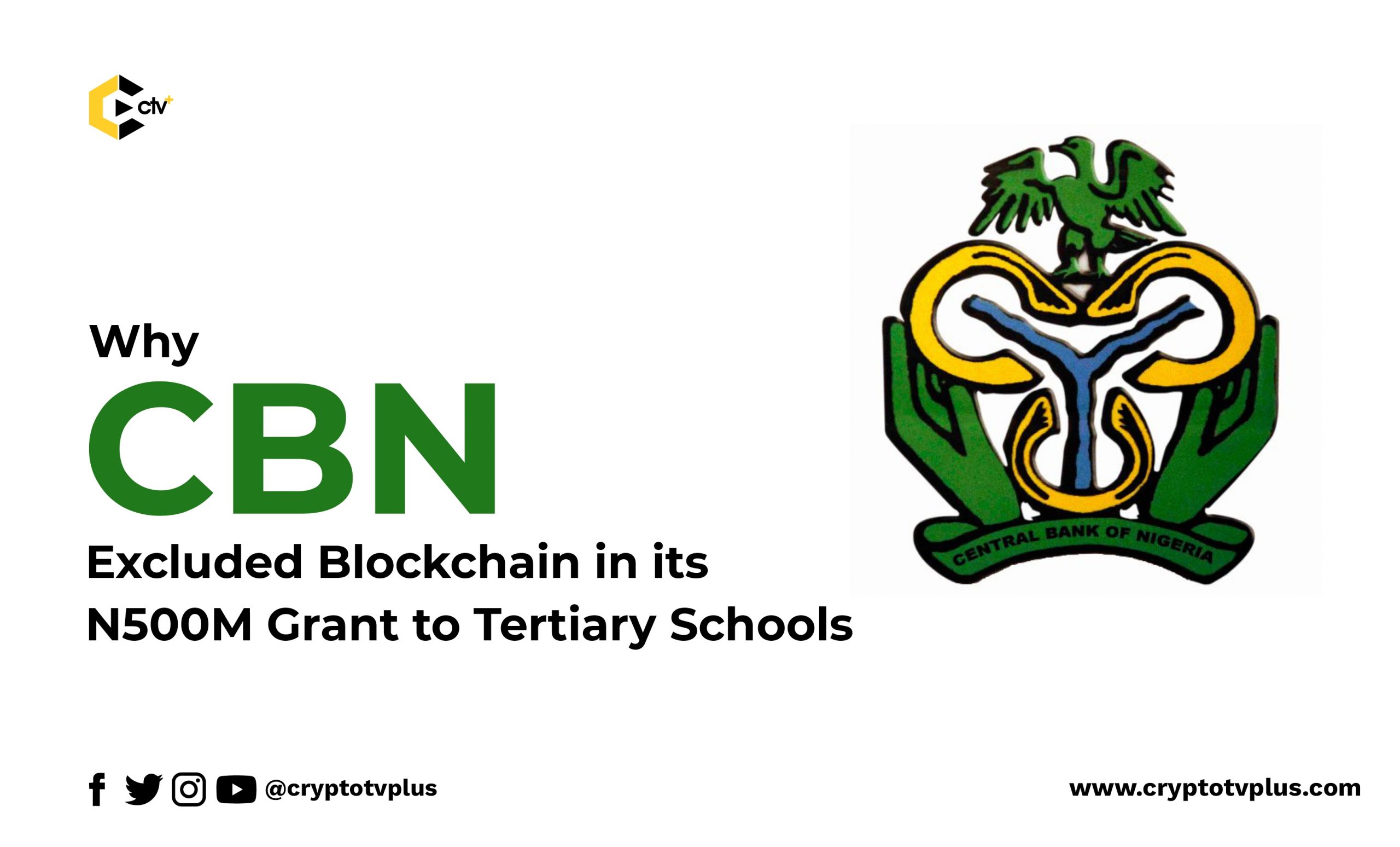 The Central Bank of Nigeria has introduced a program that will support entrepreneurship development in tertiary institutions across the country.

The program will help to reduce unemployment in the country which could get to 40% by year end.

The CBN in a report titled “Guidelines for the Implementation of Tertiary Institutions Entrepreneurship Scheme” said five top Nigerian Polytechnics and Universities with the best entrepreneurial pitches/ideas shall be awarded the N500M fund.

The grant will cover entrepreneurial activities in areas such as Agribusiness, IT, Creative Industry and Science & Technology.

The CBN revealed that the creative industry will include endeavours such as entertainment, artwork, publishing, culinary/event management, fashion, photography and beauty/cosmetics.

The agribusiness includes production, processing, storage & logistics while IT would include software development, business process outsourcing, robotics and data management.

The program will be open to undergraduates and existing businesses of graduates.

Medical innovation, robotics, ticketing systems, traffic systems, renewable energy and waste management will be the focus in the Science & Technology category, according to the CBN.

Beneficiaries are to apply for the fund via an online portal and provide all required documents to support their application. According to the report, interest rate will be five per cent per annum and nine per cent effective from the 1st of March, 2022 or as may be determined by the CBN.

Priority to be given to certain Businesses but Blockchain businesses will not see a kobo from the fund.

According to the Central Bank of Nigeria, priority will be given to innovative entrepreneurial activities that show high potential to create jobs, transform the economy and export.

In 2019, CryptoTvplus reported the SEC saying young people are getting involved in cryptocurrency (blockchain) according to a study carried out.

And blockchain technology and its applications has been growing increasingly fast in the country. 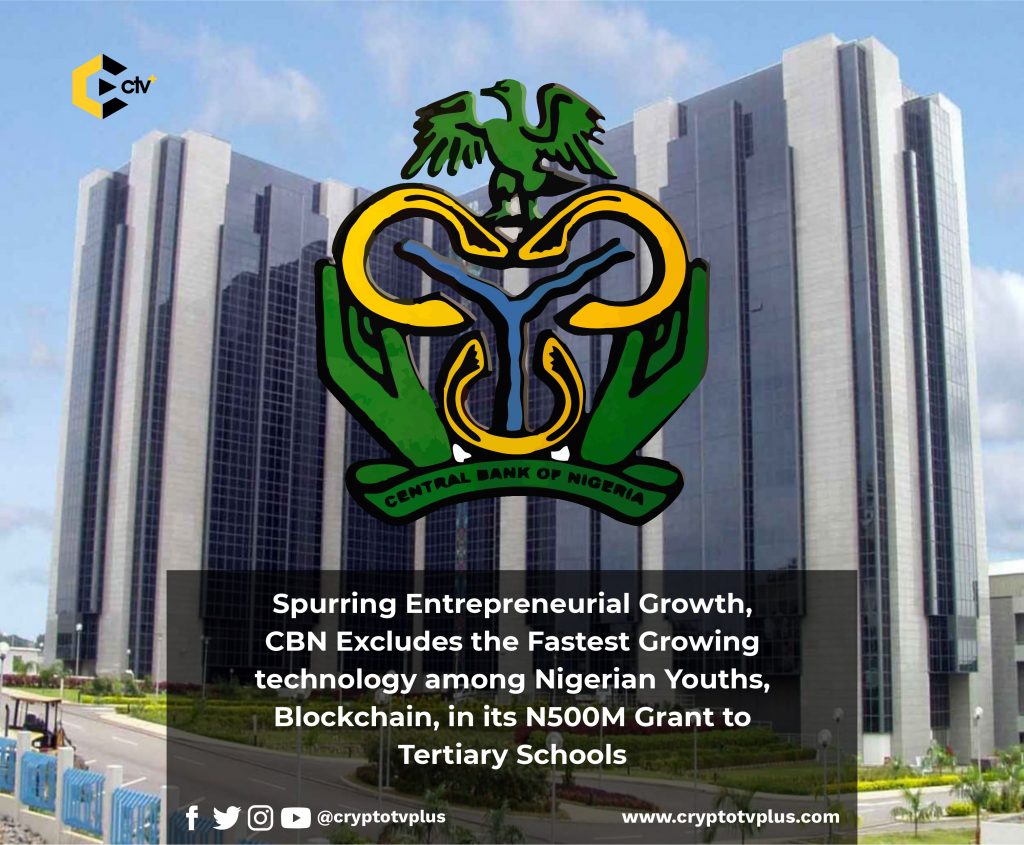 But why has the CBN’s not taken into consideration this highly innovative and fast growing industry which young people are already used to; are progressing rather increasingly fast in and has the potential to transform the economy of Nigeria?

In order to answer this question, we will have to journey back to the nearest past, to the day of February, 5th, 2021.

On the fifth day of February, 2021, the Central Bank published a circular which prohibited financial institutions from facilitating cryptocurrency transactions.

This circular also mandated financial institutions such as Deposit Money Banks who mostly facilitate transactions to investigate and close down accounts of those involved in cryptocurrency.

This crackdown will influence banks to purge known accounts from their system because the CBN had threatened the financial institutions will be sanctioned if they don’t.

This act would reverberate across the Nigeria blockchain and cryptocurrency industry and setback operations of lots of crypto businesses that had relied on the relationship crypto businesses had established with banks to enable easy purchase and sale of crypto. However, crypto was made for a time like this and trading activities went peer to peer.

The Securities and Exchange Commission (SEC) that had earlier published a statement classifying all cryptocurrencies as securities would come to back or support the position of the Central Bank of Nigeria on cryptocurrencies.

Despite the invitation of the Nation’s Senate to prevail on the issue, the CBN would remain adamant on its position on cryptocurrencies.

The CBN Governor in a statement called cryptocurrency black and opaque and it is money created out of thin air.

In an interesting turn of event, the CBN a few months after putting its knees on the throat of crypto adoption and growth in the country would announce its intention to launch its own digital currency.

This digital currency, the e-Naira was scheduled to launch on the 1st of October but the CBN would fail to achieve the launch of its’ prized product citing Independence Day issues.

While the launch date moved to a future date, the e-Naira and its digital currency wallet Speed would take a while to come out.

The CBN hopes to transform the financial sector with the e-Naira. Hope it will continue to hold onto until the e-Naira is ready to go live.

But for now, we can imagine the CBN in the voice of Gandalf saying to blockchain businesses “you shall not pass”.