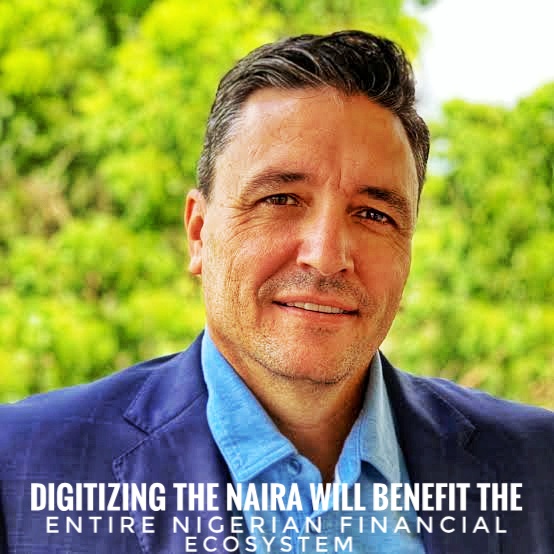 The CEO of Bitt Inc., Brian Popelka has said the digital naira (e-Naira) will benefit the entire Nigerian financial system in several ways. The CEO said this in an interview with local media TheCable

In the interview, the Bitt Inc. boss said the company is proud to partner with the Central Bank of Nigeria to launch a live retail CBDC in the largest economy in Afrca. And it is especially proud to do this in Nigeria which is well known for its fintech leadership.

Recall that few months ago, the Central Bank of Nigeria revealed its plans to launch a digital currency. The project was named “Project Giant” and it was announced the project will go live on the 1st of October, 2021 coinciding with the nation’s Independent Day celebration.

Several reactions has also trailed the adoption of Bitt Inc. by the Central Bank of Nigeria with some within the tech community asking via the grapevine why didn’t the CBN adopt a local company to take  up the project.
Also, there is the concern of Bitt Inc. having Nigeria as one of the countries on its restricted list.

It is nothing however, that the CBN has remained resolute in its plans to launch the e-Naira on the 1st of October, 2021.

Bitt’s software will lower cost of sending and receiving money

Brian Popelka spoke on the company’s direction for the African market in terms of blockchain based digital currency. The said Bitt’s financial software could help to lower the cost of receiving and sending money and promote financial inclusion all through Africa.

He spoke with TheCable team saying “we have already formed local partnerships and are in active discussions with several other African countries. We look forward to going live with additional deployments across the continent over the next 2 years.”

October 1st is just two weeks away and the nation awaits the CBN’s digital naira.

EU to invest $177 Billion in Blockchain & other emerging technologies

[…] an interview with the CEO of Bitt Inc., Brian Popelka, he said the CBN has been working on the e-naira for several years. ENAIRA PAYMENT SOLUTIONS LIMITED was registered as a limited liability company according to data […]

[…] an interview with the CEO of Bitt Inc., Brian Popelka, he said the CBN has been working on the e-naira for several years. ENAIRA PAYMENT SOLUTIONS LIMITED was registered as a limited liability company according to data […]

[…] CBN hopes to transform the financial sector with the e-Naira. Hope it will continue to hold onto until the e-Naira is […]