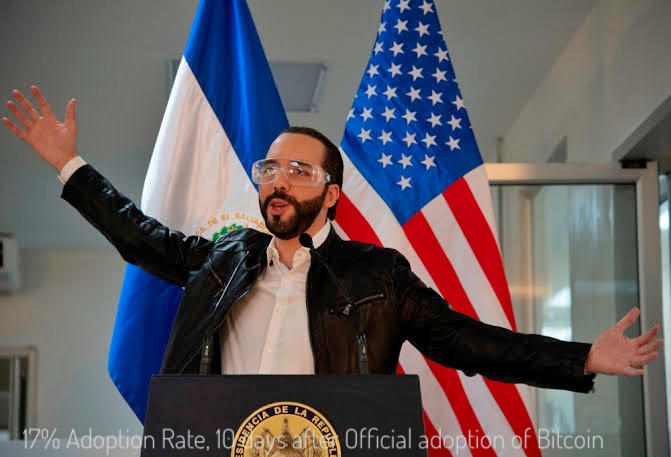 Barely over 10 days since El Salvador adopted bitcoin as a legal tender officially, the nation has recorded over 17% adoption rate of the nation’s backed cryptocurrency wallet Chivo.

Over 17% of the citizens in El Salvador have adopted the countries official crypto wallet, Chivo.

The President of El Salvador Nayib Bukele, announced on twitter that the nation has recorded 1.1 million citizens who have downloaded the government backed wallet.

He also revealed 65% of the phone models haven’t been enabled to use the app yet. The President boastfully shaded traditional finance saying “it seems that we will be able to bank more people in 1 month, than they did with nationalization and privatization of traditional banks in 40 years.”

Few months ago, Nayib Bukele, President of the 6.5 million people nation announced that the country will be adopting bitcoin as a second legal tender adding to the dollar it already has.

This action generated a lot of positive comments from crypto faithfuls cheering the country to carry on. While global bodies such as the World Bank and the IMF gave their opinions on the move by the President, he went on to adopt Bitcoin as a legal tender.

Creating an infrastructure that will enable the adoption and use of bitcoin easier, three months ago the government of El Salvador announced and created the Chivo wallet which will enable citizens access bitcoin’s services.

In order to incentivize the adoption and use of the Chivo Wallet, the government announced it will be giving away $30 in BTC to every citizen from age 14 and above who downloads the Chivo crypto wallet.

And the law mandates all merchants to have a Chivo wallet to receive payments. Within the same period, President Nayib Bukele announced the country had purchased 200 Bitcoin  and setup bitcoin ATMs ahead of the nation’s official adoption of bitcoin as a legal tender.

Six days ago, which was few days after the adoption of bitcoin officially, the government of El Salvador revealed bitcoin taxes will not be collected from foreign investors.

With over a significant percentage of the entire population having not adopted the Chivo wallet, there is still much work to be done by the El Salvador government, this notwithstanding, El Salvador has shown the world how to adopt bitcoin.