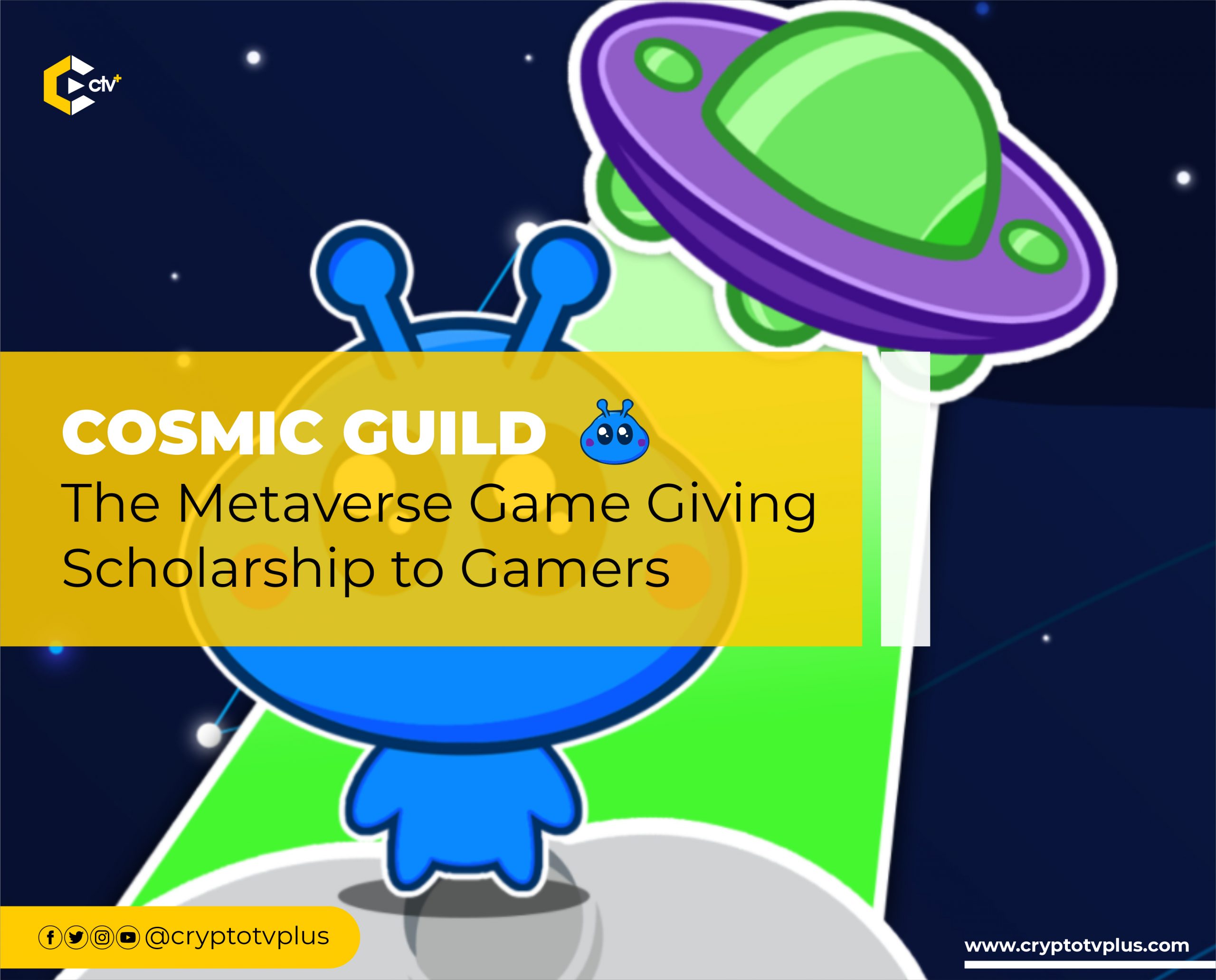 If you have Binance Lab behind your project, that says a lot about what you’re building. Cosmic Guild is all about games and games and games fused with a deeply rooted love for the community. The vision of the project drove the attraction of over a million dollars in seed funds from Binance in 2021. In Comic Guild, you have a gaming platform that cares about gamers and not just what the founding team will get alone. And you’ll see why this is correct.

How did Cosmic Guild Start

The team behind Cosmic Guilds are gamers to the core according to the testimonial given on their website. Being part of the gaming world, they have watched the crests and troughs of gaming waves. Some of them were and are employees of firms like Coinbase, Gemini, and Binance.

“Our mission is to empower individual gamers across different societies and come together as gamers, to not just play-to-earn,” said Kenneth Lee, Co-founder of Cosmic, during an interview with Binance, “but to also play for fun, form meaningful friendships and have fun together in the metaverse.”

Axie Infinity and other awesome gaming platforms opened the potential of the gaming world for gamers with the explosion of the blockchain-metaverse mix. Games are becoming more expressive and a reflection of not just what companies want but what the users want. However, some of the challenges the founding team at Cosmic Guild discovered that made them push for this project included:

These troubles aroused the creativity of this team to build the Cosmic Guild where there is a free flow of creativity, purpose, and profit from the originators to incoming gamers. One such great step taken by Cosmic Guild was to allow loaning of NFTs, which is the major asset in the gaming world today, after which they can be returned making sure that the borrower has built enough NFT assets to continue without borrowing again. The business model being used is the P2E model where you make some good cash while having fun and connecting with others in a global gaming community.

One of the most important attributes of today’s gaming platforms is the presence of a community where participation is vital. And as such, several responsibilities are issued for the management of the community.

For certain reasons, it’s not so easy for the major stakeholders of a project of Cosmic Guild to always be involved in the day-to-day running of the community. And so, a structure was created to institute control so that the ecosystem is safe and develops accordingly with responsibilities shared amongst certain officers. These officers include:

They are selected by the DAO who permit them to have access to the treasury via multi-signatory systems. As a Guild Master, a person is expected to represent Cosmic Guild at events and also make sure that proposals that will make the platform get better are implemented. However, this activates when Phase 3 of the development process of Cosmic Guild is achieved. Before then, the founding team will occupy these roles.

After the Guild Masters, Managers are the next. To be a member at this level, a person is meant to have shown proficiency in any of the games Cosmic Guild is involved in. Managers are also meant to train scholars to be better at these games with a focus on expanding the territory of Cosmic Guild by building more lands in the Metaverse. From time to time, there are rewards given to competent managers from yields earned by scholars who are overseen by the same managers.

How to Earn in the Cosmic Guild Community

Some subDAOs are part of the Cosmic Guild that are tasked with managing scholars. In essence, they permit and manage the activities of these scholars and how they use the assets of Cosmic Guild in playing games which in turn has ROI for the community and themselves (the scholars) as well. Plans are upcoming for venturing into virtual Real Estate activities so that the ROI for using NFTs from Cosmic Guild is higher. If you are one of the gamers, you will be rewarded for the yields you bring to the community.

Even if you’re not a gamer, you can lease your NFT to the Cosmic Guild Community that allows their scholars to play games with it, then share the yield with you. You don’t have to be scared as the NFT will be in your possession, and you alone as the accessor via your private key.

Here’s the UEFA Champions League version in the world of Metaverse gaming. For the eSports process, Cosmic Guild has structures put in place to sponsor their best gamers who can attend big gaming tournaments, play, win and bring the trophy back to the Cosmic Guild community. How fun this will be. So, if you think you can do this, you can give it a try.

All projects have starting dates but then before those dates, there is a kind of whitepaper materials released as a guide for how the project will develop. The process of development for the Cosmic Guild will be outlined here from Phase 1 through Phase 3. In Phase 1, the plan is to introduce Axie Infinity as a subDAO.

And then, focus on increasing the number of scholars to 1000, improving the scalability of the platform. Thanks to the Seed Funding from Binance as it was part of the plans for the phase one aspect of Cosmic Guild.

Phase 2 was planned to have a public sale exhibit, implementation of the dashboard, technical development for scholars/managers, and portfolio tracker.

Funds received from the sale exhibit are meant to be directed at developing and procuring more assets for the community with the aim of increased growth. In the third phase, DAO governance should begin, the release of the Non-custodial NFT platform that will help scholars earn without having sophisticated assets. You can see more of this here.

The Cosmic Guild Token, $CG is the native token of the Comic Guild Platform. It is used in various ways to enable the participation of users in the ecosystem:

Most tokens of blockchain platforms perform this role of governance. How does it happen? For any individual with the token, access or permission is given to be part of those who influence the changes made in the ecosystem by voting in on suggestions and decisions to be made. These can come in as proposals that are targeted at making the guild improve treasury management, subDAO inception, capital allocation for subDAOs, and guild recruitment programs.

Staking $CG like every other blockchain platform shows that a user believes in the project and the user wants to allow the asset to be used to maintain activities running on the platform. In exchange for the staking of the $CG token, more power is given to the user relative to the time selected for the lockup. Apart from that, there are earnings given for all staked tokens like is seen with similar platforms. With Cosmic Guild, stakers can be granted access to specific information like NFT drops, exclusive merchandise, and other benefits the DAO deems fit for that class of users.

According to the value of $CG in respect to the portfolio, yields generated from play to earn which are sent back to the CG DAO are either used to buyback and burn $CG when the price of $CG falls or they are used to buy more game assets accelerating growth for the guild.

The distribution of tokens in any project is always determined before the project ensues. While doing this, considerations are placed on the founders, community, future timeline, development of the ecosystem, investors, users, inflation, and other margins. For Cosmic Guild, the total supply of $CG is 500,000,000. Here’s a breakdown of how this token will be distributed:

For founders, the first twelve months will be used to distribute 5% of the 15% allocated to them and then the 10% left will be shared over 5 years. Seed Investors, private sales, and public Sales will get 10%, 5%, and 5% respectively of the total allocation.

The promise this project has is large. There is no doubt that it is on a roadmap of being one of the most successful gaming platforms combining Metaverse experience and blockchain technology.

As of last year, they were providing 600 scholars with NFTs in the Axie Infinity community. And guess what? On their waiting list, they have more than a thousand scholars waiting for scholarships.

You can say that they’re powering gaming scholarships. Powerhouses like DeFiance Capital, Alameda Research, and Play Ventures are part of the investors interested in this project. Would you want to try it?

MetaStrike: Now You Can Shoot, Build and Earn from this Metaverse Game