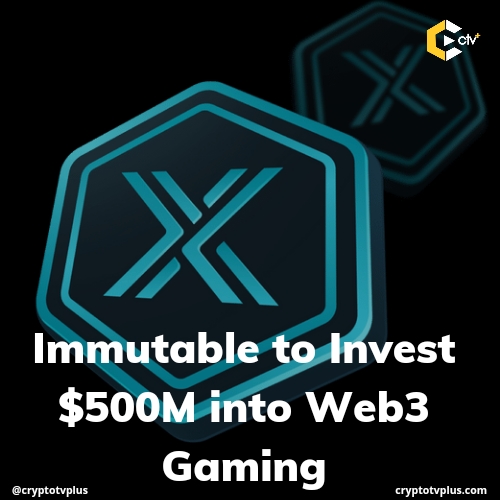 After setting up one of the most innovative metaverse platforms, Immutable X, and closing a $200 million Series C round led by Temasek, the Immutable brand is setting aside half a billion dollars to fund Web3 game development. This is not coming as a shock as they have created a Web3 platform on which blockchain projects can be built.

This announcement was made on its official Twitter handle:

Continue the thread below. 🧵 pic.twitter.com/u5rPPsApAt

The Australian-based web3 gaming firm wants to fund Web3 games and NFT projects that will be built on its layer-2 platform, Immutable X. Some already existing brands using the Immutable X platforms include GameStop, TikTok, OpenSea, and Illuvium, to name a few.

Breakdown of the Fund

According to the official statement, the fund will be divided into Ventures and Grants. For the Ventures, brands like BITKRAFT, Animoca, Airtree, King River, GameStop & more will come together to create an investment fund that will benefit those building on their platform.

For Grants, the team will be working with “Riot Games to provide applicants with extensive necessary knowledge on tokenomics, game design & marketing to launch world-class blockchain games on our protocol,” says the statement.

“Grant applicants who unlock progression milestones will be rewarded with $IMX. Token-related investments will strictly follow the token unlock schedule (24 months).” This gives developers and Web3 teams globally access to funds to build valuable assets on the Immutable platform.

Speaking about the project, Robbie Ferguson, president and co-founder of Immutable said, “It’s the perfect time to start really building long-term games that will have true in-game economies that will get a hundred million to a billion players on web3.” The blockchain gaming industry grew to $3 billion in 2021 showing that the opportunity is great for both gamers as well as developers to create value in the thriving economy.

Apply for the fund here.

Related Topics:fundingIlluviumImmutable X
Up Next