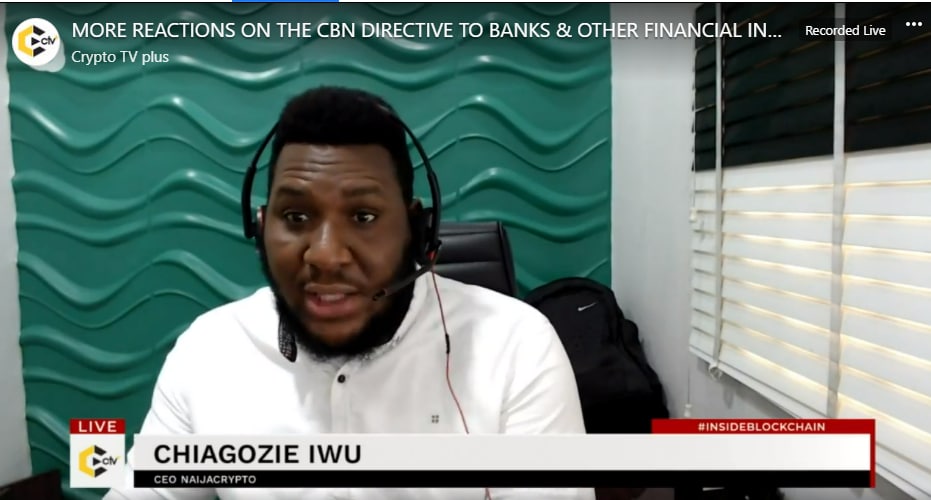 The Chief Executive Officer of NaijaCrypto, Chiagozie Iwu has said on the Inside Blockchain Show powered by CryptoTVPlus that the Nigerian Government cannot ban trading of cryptocurrencies. He made this known in an interview with the host when he was asked if the release by the Central Bank spelt out a total ban for cryptocurrencies in the Country.

Furthermore, the chief executive noted on the show that the ban would only affect exchanges, banks and payment bodies that facilitate naira deposits to exchanges that trade cryptocurrencies;

“The Central Bank of Nigeria cannot ban cryptocurrencies, it’s beyond their jurisdiction… the recent ban would affect exchanges and naira deposits…”

Chiagozie also said the Central Bank’s move on cryptocurrencies is a pointer to how outdated the country’s Central Bank is when it comes to issues related to the crypto industry. Citing the example of Canada placing bans on cryptos in the release by the CBN speaks volumes on how outdated the Bank is according to Mr. Chiagozie because countries have already developed frameworks that regulate use of cryptocurrencies and even generate revenue for their government via taxations.

However, while commenting on the “speculative” usage purpose of cryptos according to the release by CBN, the chief executive claims that every financial asset and market are speculative;

He further went on to say it is lack of understanding to ban crypto outrightly because 2% of the market use it for illicit purposes;

“With all due respect, it is counterproductive and stupid on the side of the regulator.”

Related Topics:inside blockchain
Up Next