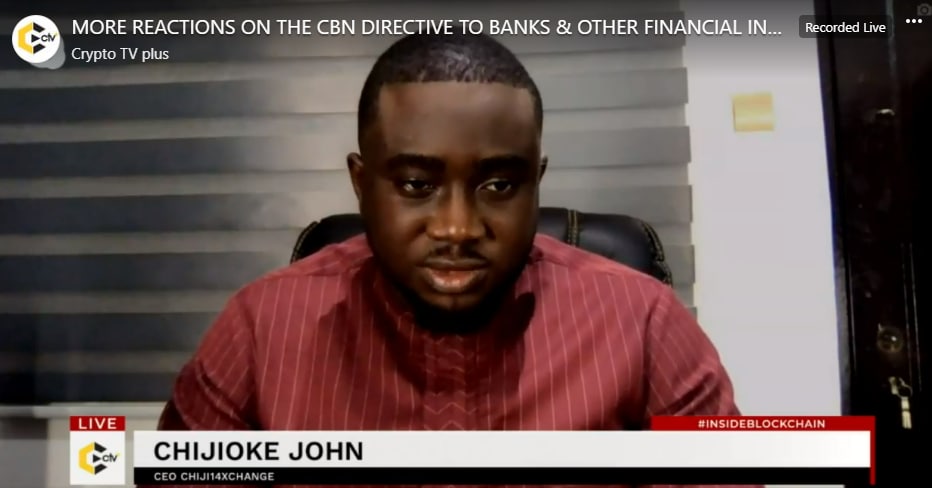 The discussion this morning was focused on the recent release by the Central Bank of Nigeria last week Friday, 5th February, 2021. The Bank of Nigeria also published another five page release that explained the reasons for their actions of banning cryptocurrencies in the country.

While on the show discussing “the economic effect of CBN Directives on Banks”, the chief executive stated clearly that the action from the Nigerian Central Bank was not an unexpected one as the CBN already took a step in that direction around 2017.

He went on to say the Nigerian cryptocurrency industry had its own part to play and has to take a little blame as regards self-regulation and identification. In this regard, the executive meant the stakeholders in the space should have taken necessary steps towards developing a working regulatory framework with the Nigerian authorities.

All hands needed on Deck

While still on the show, in an interview with Tony Obiajuru, on the question of what’s next to do, Mr. Chiji stated that now was the time for everyone to get their hands on deck in the country’s cryptocurrency industry. He clearly stated that it is very important to do so even though Exchanges are the most affected by the directive from the Country’s Central Bank. He believes that collective response is the best to the issue at hand as it will burn down to retail traders even if Exchanges are the ones that are majorly affected;

Related Topics:inside blockchain
Up Next

[…] See also: CEO, Chiji14Exchange Says Now is the Time for Everyone to Get Involved […]