No longer a security; DOT has morphed. See how
Advertisement 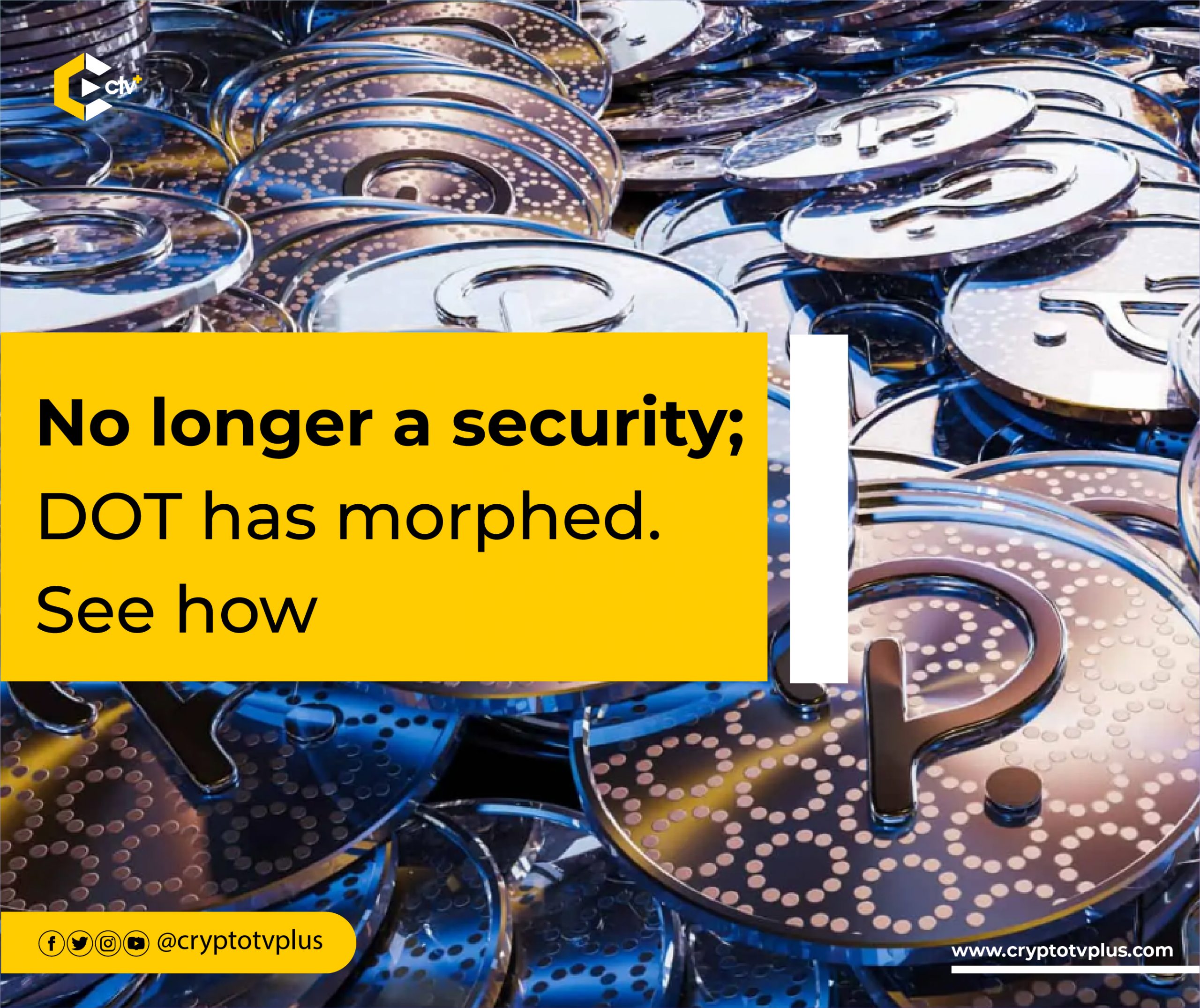 The Web3 Foundation has announced that DOT, the native asset of the Polkadot ecosystem has morphed and is no longer a security, but a software. The foundation on Friday published a report detailing its journey to achieving this status. The Web3 Foundation is an organization that funds research and development teams, building the foundation of the decentralized internet.

According to the Web3 foundation, it has been a long journey from 2019. The announcement commemorates the third anniversary of the first interaction between the Web3 Foundation and the Strategic Hub for Financial Innovation (FinHub) of the U.S.

When the Web3 Foundation first contacted FinHub, the SEC had just filed its complaint against Telegram, and the FinHub staff’s Framework for “Investment Contract” Analysis of Digital Assets (the “Framework”) had just been released a short time earlier. These developments followed the SEC’s announcement of numerous other enforcement actions and announcements, such as its 21A Report of Investigation: The DAO (“The DAO Report”), the Munchee cease-and-desist order, and the  Kik decision.

Web3 Foundation Chief Legal Officer Daniel Schoenberger stated that the framework suggested that practically every digital asset provided and sold for fundraising reasons, initially, was extremely likely to constitute a security when it was delivered to initial customers. The Framework, however, also included a legal course of action that would allow a digital asset that was initially offered and sold as a security to be reassessed at a later time. There was a possibility that it would cease to be a security for the purposes of the federal securities laws of the United States. In other words, digital assets might change.

Consequently, the current offers and purchases of DOT, the native asset of the Polkadot blockchain are not considered securities transactions in the eyes of the Web3 Foundation. DOT is employed for the purposes for which it was intended, including facilitating on-chain governance and helping to secure and bid for parachains. DOT holders have long had control over the Polkadot network. “DOT is not a security anymore. It is software”, Mr. Schoenönberger added.

”We’ve been meeting with the FinHub personnel on a regular basis for three years. As a result, we have established a strategy for compliance that is comparable to our strategy for technological development: head down and committed with a high bar. Since the beginning, we have made an effort to innovate in our interactions with the SEC while adhering to U.S. federal securities laws, particularly with regard to the offer and sale, marketing, and delivery of tokens as securities to initial purchasers, as well as the treatment of retail buyers, generally consistent with public companies”.

Polkadot is a next-generation blockchain protocol Polkadot that connects a vast network of blockchains that were specifically created to function together in harmony at scale. In comparison to current and historical networks, Polkadot’s design has a number of distinguishing advantages, including heterogeneous sharding, scalability, upgradeability, transparent governance, and cross-chain composability.

Elrond rebrands to MultiversX, focuses on the Metaverse