CampusBCAT2019 in UNIBEN is Postponed
Advertisement 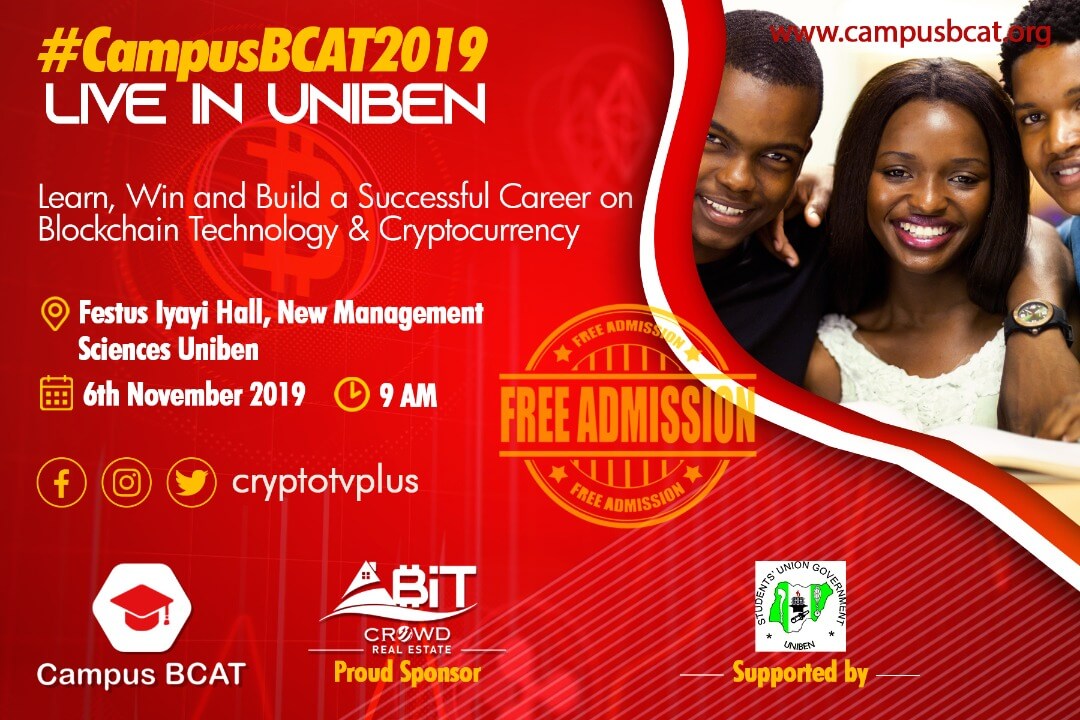 CryptoTVPlus, the convener of the Campus BCAT movement regrets to announce that CampusBCAT2019 in UNIBEN planned for 6th November 2019 is postponed till further notice.
Over the past few months, the CampusBCAT Tech movement has been on, we have toured three Universities in Nigeria and established the lasting legacy of the CampusBCAT initiative, the BCAT Club in several institutions.
As the CampusBCAT team tours the country, we have met with great numbers of future leaders each showing marvelous signs of promise and great enthusiasm to get onboard the crypto industry.
It’s our joy that in every school, CampusBCAT has held, the turnout has been nothing short of above expectations both for the CampusBCAT Team and the attending students.
The movement as born out of the desire to spread awareness while equally giving sound education on Blockchain & Cryptocurrency, the industry and how to help the younger generations position themselves in the industry of great promise, we boldly say our commitment has never waned.
The CampusBCAT train has been to the University of Ibadan where it had its maiden edition with over a thousand students in attendance. A feat none has been able to accomplish and exceed the space in Western Nigeria.
From there the movement went to the University of Port Harcourt where an even greater number of students were in attendance.
On the 2nd of November, 2019, the CampusBCAT train arrived at the great Obafemi Awolowo University, OAU, Ile-Ife, Osun State. The event was grandstanding with almost a dozen speakers speaking on key educative topics that would help position the students in creating a career path in the crypto industry.
The event has always concluded with the BCAT Club’s inauguration.
Once again, after the OAU event, the CampusBCAT train was on its way to the old city of Benin, to commence preparation for CampusBCAT UNIBEN. It was upon arrival, a piece of shocking news came to the CampusBCAT team.
Owing to violence in the institution in the previous week that resorted to the death of some students, the school management had decided to put on hold all social activities in the school directly hampering the possibility of holding the CampusBCAT2019 event in Uniben.
CampusBCAT is a Campus educational movement, and holding it outside the school premises is not in line with the vision of the movement and also, the security of ‘those it matters most’ – the students, is of great importance to the CampusBCAT.
It is because of this development, that CampusBCAT2019 in UNIBEN has been postponed until further notice.
We deeply sympathize with the family of those who lost their children. May their souls rest in peace.
Details of the next event will be communicated soon.
Victor Ugochukwu
COO, CryptoTVPlus
Head, Publicity and Planning Campus BCAT

CampusBCAT2019 Train Moves to OAU after a Spectacular Uniport Event