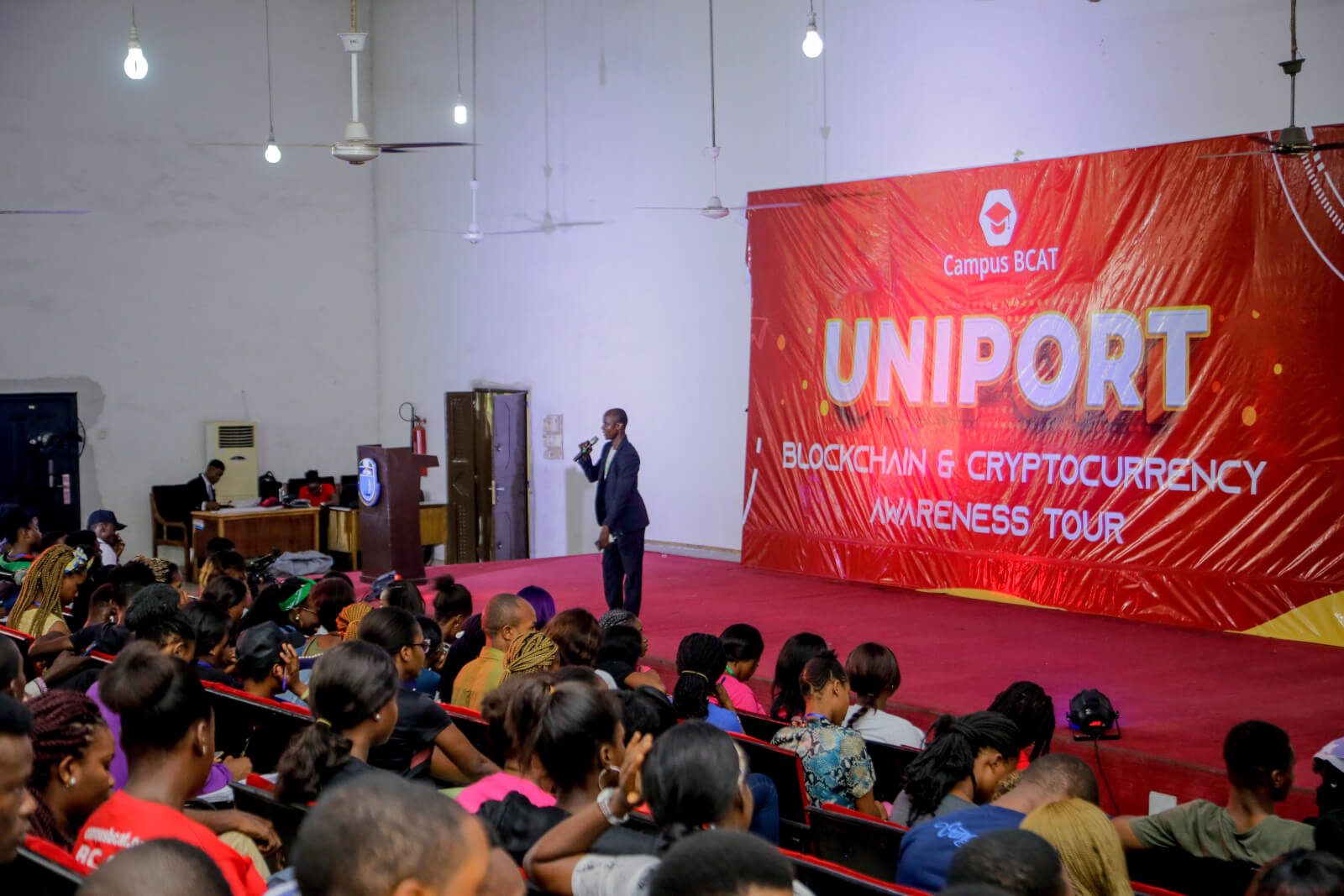 CampusBCAT a blockchain and digital currency educational initiative by CryptoTVPlus, aimed at educating African students starting with Nigeria but with a continental focus moves to OAU after a successful Uniport event.
The City of Port Harcourt alongside its biggest university – Uniport was historically hashed into the digital currency movement as it experienced its own CampusBCAT2019 event on the 24th of September barely two weeks history was made in UI, Ibadan.
The University of Port Harcourt and its students had the opportunity of hosting the tech educational event which has been garnering traction across the country as the biggest cryptocurrency community not just in universities but also in Nigeria. With membership across more than 8 universities already, Uniport’s event saw enthusiasts trooping in from neighboring schools in Rivers and Bayelsa States.

Big projects within the Nigerian blockchain ecosystem were equally present to facilitate the educational sessions of the program.
The likes of Beepmagnet Group International, makers of Sisibox was present to lecture on How the Blockchain Technology is Redefining Consumer Loyalty Globally and also showcase their state of the art product to the students who were excited to see giant strides being taken by an indigenous firm such as Beepmagnet International.
The founder of Crypto Masterclass, one of Nigeria’s finest crypto educational platforms, Tola Fadugbe was also present to teach the hungry delegates at the event on Cryptocurrency Trading and Investment.

Panel Session on the topic “Blockchain and Cryptocurrency Industry in Nigeria: Challenges and Opportunities.

As a major stakeholder in the growing blockchain and crypto business in Nigeria, the founder of Ci Crypto solutions and CEO of Naijacrypto digital assets exchange, Chiagozie Iwu was available to share from his wealth of invaluable knowledge on The importance of Blockchain Education in Nigerian Universities.
Several other projects such as Bitfxt Technologies, Farmchain, D-Online Harvest were around to facilitate while equally showcasing their products/service to the audience at the event.
It wasn’t all just lecturing as the students went home with exciting prizes such as smartphone, T-shirts, cash prizes, crypto giveaway, free investment mentorship sessions to select students, Sisibox pads and so much more. This was all made possible by the partners of CampusBCAT2019.

Inauguration of the BCAT Club Chapter in UNIPORT

Students through the BCAT Clubs in their respective campuses are afforded the opportunities to continue the learning process through active facilitation of classes and workshops while also carrying the torch of innovation through the application of what they have learned in their schools such as conducting Departmental, Faculty or Student Union Government elections on the open and transparent ledger of the blockchain.
And since we are in the era of asset tokenization, through the BCAT Clubs, several regulatory concerns that exist will be exposed to the students through the experts that will come visiting as either lecturers or Club facilitators. This is surely a breath of fresh air to Nigerian students that is set to spread across all of Africa.
With a characteristic spectacular outing at University of Port Harcourt, CryptoTVPlus the national convener of the CampusBCAT movement announces plans to host the event at the prestigious Obafemi Awolowo University (OAU) on the 2nd of November 2019. The month of November is actually super-packed with #CampusBCAT2019, while OAU’s event is slated for 2nd, University of Benin and Covenant University is scheduled to take place on the 9th and 15th November respectively.
For sponsorship and advert placement, please contact us via email
Related Topics:BCAT ClubCampusBCATCampusBCAT 209
Up Next