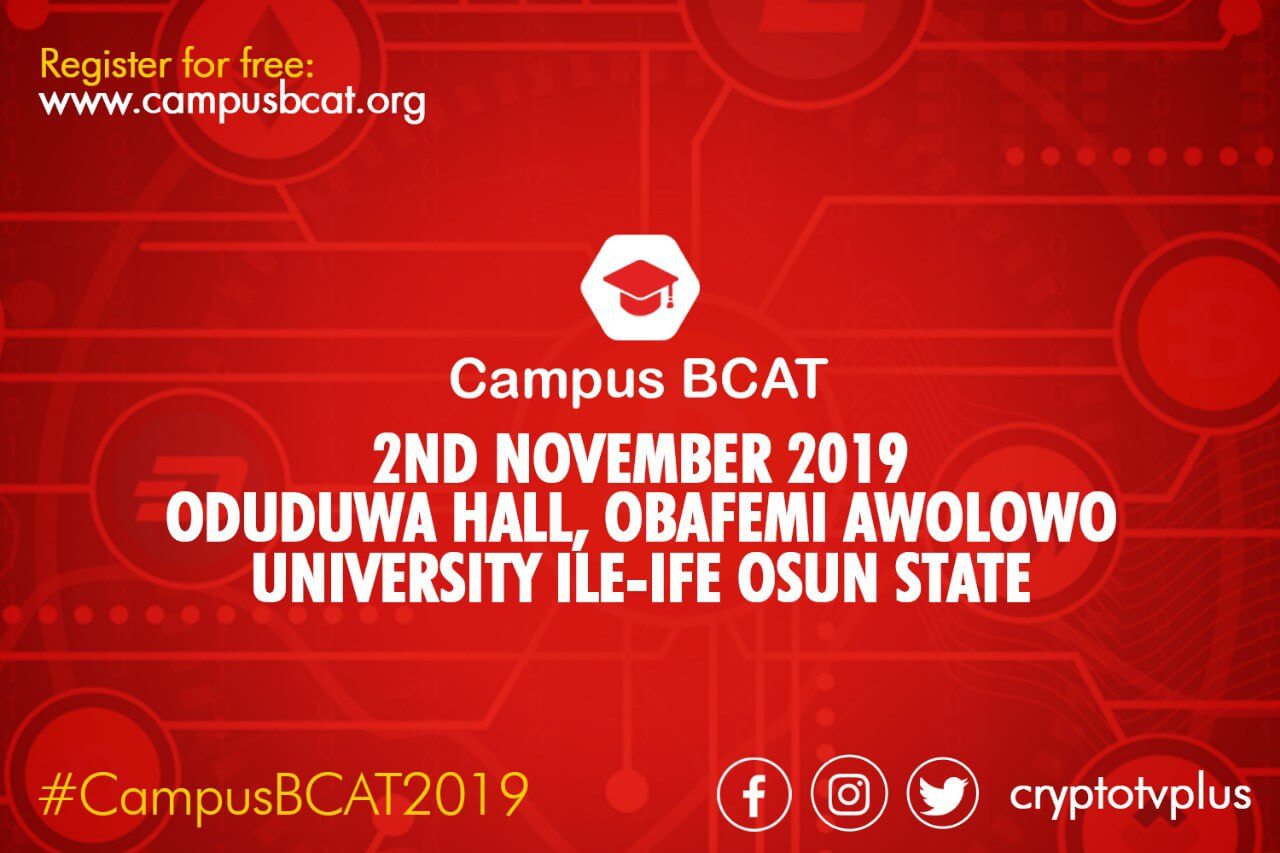 The movement has seen enthusiasts in the form of students, newbies, established crypto gurus, blockchain solutions architects, etc gladly identifying with the initiative and propagating sound education as regards the blockchain technology making it undoubtedly the fastest growing Blockchain & Crypto community in the whole of the African continent.
As past events were held at the University of Ibadan and even at the University of Port Harcourt, CampusBCAT2019 in Obafemi Awolowo University witnessed a quantum improvement from the previous events.

The event at OAU held at the most sought after Oduduwa Hall known for its characteristic ambiance and also the capacity in terms of its size. The morning of 2nd November saw excited students pouring in to register and take their already reserved seats as they registered online prior to the event date. Sponsors such as ABiT Crowd, CoinCola, Vorem Network, Huobi Nigeria, Crypto Masterclass, etc, had the spotlight on them as eager participants thronged their exhibition stands to know more about their improved product and service offerings.
Charles Okaformbah of Vessel Trust, Samuel Joseph of CoinCola, Senator Ihenyen of Infusion Lawyers, Louis Dike, Dominic Rume, Kaka Toritseju, Onome Iduh, Chukwuemeka Ezike, Chinedu Obidiegwu, Gaius Chibueze who is better known as “bitcoin chief” who connected all the way from Manchester in the UK were all among the speakers who educated the curious students present to learn about the revolutionary impact of the blockchain technology and cryptocurrency.
With more than 3,900 participants attending the event not counting those who failed to register even both online and the event venue, sponsors and their team members, CampusBCAT2019 in OAU quickly surpasses attendance of the edition held at the University of Ibadan which recorded 1,356 persons in attendance or even Uniport which had a total of 4,228 persons in attendace entirely capturing everyone, participants, sponsors and their team members included.

Some of the students of the Obafemi Awolowo University had the rare opportunity of presenting their acts such as music or even talent hunt competition where winners were gifted prizes. ABiT Crowd, a Crowdfunding Real Estate company built on top of the blockchain was presented to the participants demonstrating the practical aspect of tokenization where large and immovable assets can be fractionally owned. ABiT Network also gave out a cash sum of One hundred thousand naira to 10 persons with each getting ten thousand naira each.
While the participants enjoyed every moment of the event, the usual crowning point of CampusBCAT saw the inauguration of BCAT Club, the legacy which CryptoTVPlus bequeath to any school where the Campus Blockchain & Cryptocurrency Awareness Tour is held.

A total of 30 students were inaugurated into BCAT Club and certificate of commendation issued to the members. Owolabi Jeremy Oluwasegun, a second-year law student of the Obafemi Awolowo University (OAU) was inaugurated as the first BCAT Club President OAU Chapter.
Tony Emeka, Co-founder & CEO of CryptoTVPlus, Organizer Convener of Campus BCAT said

We are indeed excited to be here for this event. Obafemi Awolowo University holds a special place in our hearts. I am sure we all know that CampusBCAT2019 has gained global recognition already.
This is the third school we are visiting and holding this event in Nigeria. At every successive outing of CampusBCAT2019, it has been successfully improved upon in terms of traction across several metrics. From publicity to the attendance and support from both the student bodies and our esteemed partners, there has been a noticeable improvement.
The members of BCAT Club OAU chapter will be the very first school to be issued a certificate of commendation for exemplary planning and execution skills. So much more is in the offing and my advice to the students in Nigeria is to take this golden opportunity very seriously,

he concluded.
Also speaking at CampusBCAT2019 in OAU, the COO of CryptoTVPlus, Head, Publicity and Planning Campus BCAT, Victor Ugochukwu in his keynote address was quoted saying

This movement was born out of the desire to drive proper, targeted and result-oriented enlightenment to the younger generations who in a few years will define where we go as a nation and as a society.
We have been to the University of Ibadan and University of Port Harcourt where we saw warmth and were welcomed with a large number of attending students.

While we are confident that the CampusBCAT movement has gained a lot of traction and popularity among not just tertiary education students but also the broader blockchain and crypto community we are not resting on our oars as we must keep pushing to ensure the adoption hurdle when it comes to blockchain technology and cryptocurrency is brought low engendering easy access and participation either as a player or user.

CryptoTVPlus in partnership with EmpowerMeEOS a not-for-profit foundation founded by Toritseju Kaka handed out a free laptop as the star prize of the day to the winner of the Social Media Challenge which had the signature hashtag #CampusBCAT2019 trending across several social media platforms like Facebook, Twitter, and Instagram.
With a scintillating outing, CampusBCAT2019 in OAU has received several commendations not only from industries in Africa but also in Europe, Asia, and North America.
CampusBCAT has set a standard, a trend, a template that the industry can use to drive cryptocurrency and blockchain education. We have never been so excited at the promises of the future.