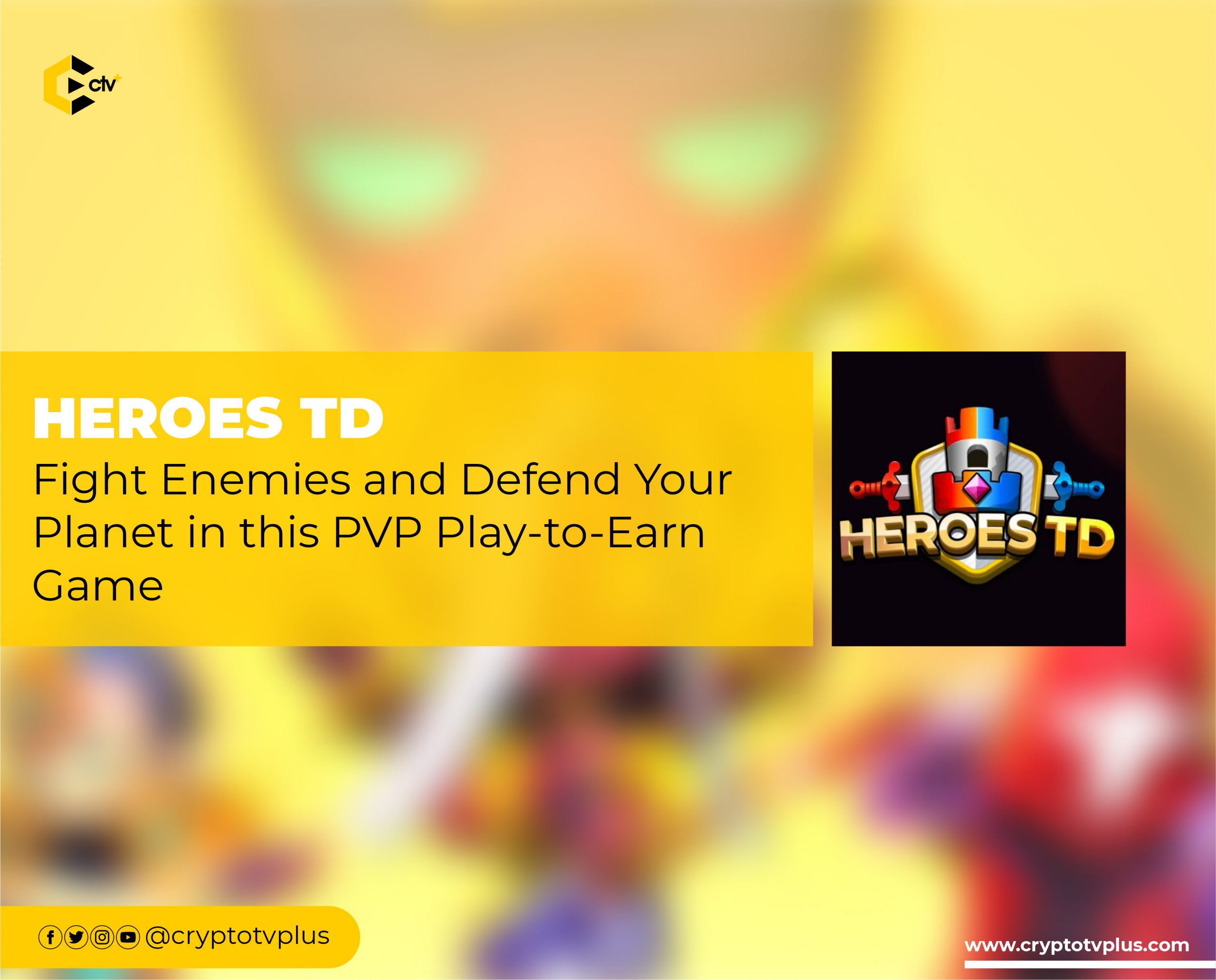 Taking a look at the gaming world, the word “GameFi” has become popular to communities of crypto investors and gamers all around the world. Game lovers can now start playing and receiving profits from various activities, such as completing quests or generating revenue from their in-game assets. As NFT games are booming in the market, more P2E games keep springing out making the GameFi sector bigger.

HeroesTD is one of the thousands of play-to-earn games. It is an NFT collectible tower defense strategy game. It is a game developed by CG studio, a Singapore-based studio, founded in 2013.

CG studio is Keen to produce mid-core strategy games with over 6 million downloads on mobile stores.

Logically, one of the purposes for developing Play-to-Earn games is to create a means of livelihood for gamers and crypto communities.

HeroesTD is also one of those platforms where players can come together in a community to play.

Players can also create new unique NFTs and have a lot of fun.

Heroes TD is a Play-to-Earn blockchain game where Heroes are summoned to fight enemy bases and defend theirs. Playing Heroes TD can be in two ways.

The first type of way is where players are allowed to play and experience how the game works. I call this stage, the” Tip of the Iceberg”…players can use this stage to understand the game with the Non- NFT hero.

This can also be referred to as the low-level PvP arena stage.

However, it can be used to earn daily quests, login rewards, and Events.

Each Non-NFT hero has a unique rarity factor. This coefficient will determine the amount of IGC coins obtained after each match.

The other type of Heroes is the NFT-hero which is mostly used to move away from the low-level PvP Arena to the high-level PvP arena.

This is the main level of the game where you get to earn massive rewards and points from Tournaments, challenges, Rank Match, and so on.

To play this level of the game, a strong deck is needed which can only be obtained from  NFT HEROES which can be purchased from the marketplace.

Each NFT hero has a unique rarity factor.  determines the amount of eCGC coins obtained after each match.

Thousands of years back when the planet was named Aeon Disk. At that time the planet was ruled by supernatural beings. They were filled with high knowledge of technology that helped the world prosper for many years. On the planet, society was grouped into two; The high-class society and the low-class society.

High-class society lived above, named Cloudspire while the low class lived below, named Eden. The high-class society sees the other society as a nobody and disrespects them. This segregation continue to cause problems amongst these two societies which led to their first war (Era).

During the time of the first era, many heroes came together from their distant land and with their great supernatural powers and fought for years and destroying the planet.

The Aeon Disk planet was shattered and then transformed into the shattered world and only the most knowledgeable heroes with the greatest glory and absolute power can prevail.

As time went by, a council of seven strongest heroes was chosen by the high-class society to eliminate those newly emerged Heroes from the low-class society. Wars broke out, the Heroes also came together and created The Alliance, to get back what is rightfully theirs.

PlayToEarn: How to Earn Money by Playing Cowboy Snake

At the beginning of the game, 8 Non-NFT heroes called a starter deck will be given to players which are used to participate in PvP Arena and battle with other players to earn IGC.

The player will start with 100 points of energy. Each time the player presses the Summon button, an amount of energy will be spent, and a random hero from your deck will be summoned to the field.

In each of the games, multiple waves of the enemy’s heroes will be communicated to a track leading to the player’s base and the same will be done from the players to the enemy.

Note: To defend your base, you are required to spend energy to summon a hero. The more stars a hero has, the stronger it becomes. Depending on the hero’s character, the increased stats may include better attack damage, more health points, higher defense.

HTD is the DeFI token for Heroes that can be used to participate in-game activities and purchase assets on the marketplace.

$HTD  is that important token that all Heroes TD must have as it is used to summon new heroes in the game.

$ HTD can be earned through the  Play-to-Earn activities.

NOTE: HeroesTD will not sell $CGC directly. It can only be created by the players and can be earned through most of the in-game.

Heroes TD believes that with the introduction of  Blockchain technology, the game industry will transform again into a new era, where games are owned by everyone.

Looking forward to a future where all the games can be connected into a Metaverse, in which the players can bring their favourite characters across many games, to continue exploring the game verse.

Related Topics:Heroes TD
Up Next