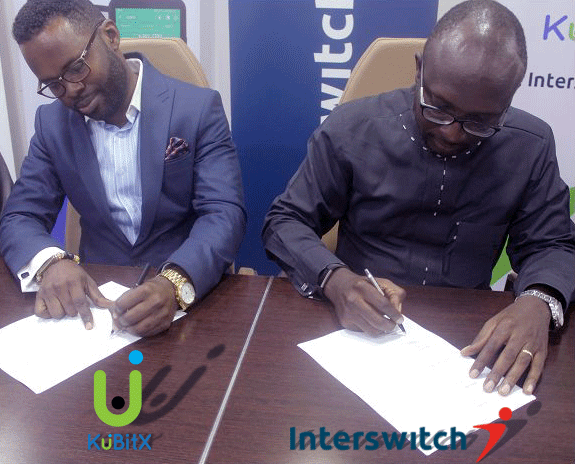 KubitX a pan African blockchain platform has announced the successful signing of a partnership deal with Africa’s payment Giant – Interswitch towards the full development and launch of its Blockchain as a Service Infrastructure.

Interswitch, a giant in payment processing, servicing hundreds of banking institutions and several other fintech platforms across at least 5 different nations within the African Continent and operational access to more than a dozen other nations still in Africa has been working closely with Microsoft, a global tech giant towards the launch of a supply chain financing platform with blockchain technology.

In order to explore and develop other areas of a wide blockchain interests in the ecosystem, it has been in talks with several reputable firms with the requisite expertise in the area of blockchain and its varied applications. The search for a possible partner with which it would co-create other aspects of this budding technology has led to this innovative partnership it recently signed with KubitX.

KubitX Limited, on the other hand is a Pan African blockchain solutions company registered in Malta and with two live blockchain related products: namely a digital assets marketplace where tokenised assets can be issued and exchanged, as well as a payments and remittances solution (KuBitX PROW) that leverages blockchain technology to make instant international transfers of value at insane speed and extremely low cost.

KubitX is barely  more than a year since it was founded in 2017, and after it launched with an ICO it announced in the Global Blockchain Congress, a conference held in South Africa, it has opened up access to its Exchange and hybrid OTC wallet as far back as December 2018. It is also on record as the first to create Africa’s first stable coin, while also attracting seed investment in 2019. With a strong team cutting across several nations in Africa, the United States and Asia, it boasts of a team with the best talents in the industry having worked with top tech firms across the world.

With live operational products such as its digital asset exchange open to anyone around the world, where they can trade and cash out in fiat especially with its core focus as Africa majorly to bring about a financially inclusive economy where the unbanked are properly catered for, it is clearly cementing its position as an industry giant. It also has in its portfolio the KuBitX PROW built to assist freelancers in Africa who work and earn income by interacting with international clients. With the KuBitX PROW, travel and tourism within Africa is expected to become easier as users will no longer have to rely on uncertain currency fluctuations and black market manipulations.

With this partnership, Africa is clearly weaning itself from foreign dominated tech dependency and living the Pan-African dream in principle.