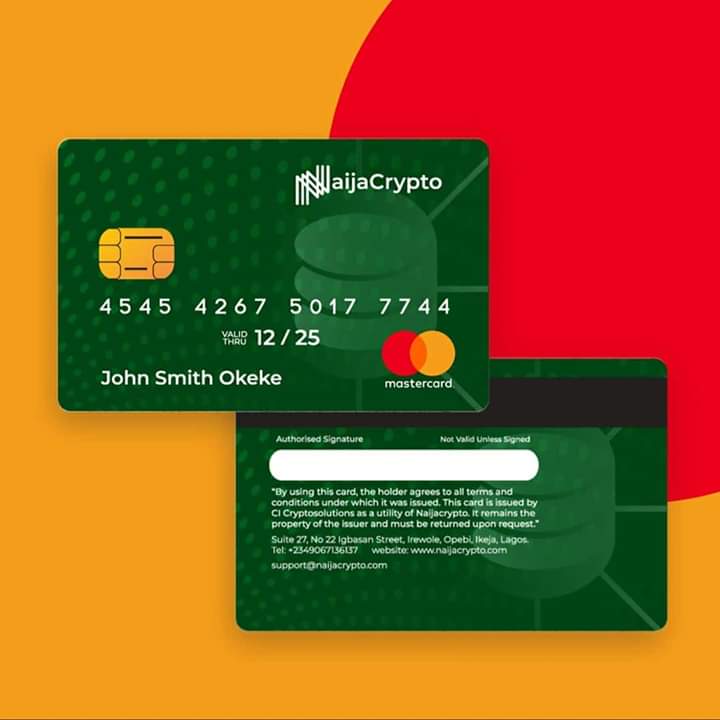 Popular Nigerian cryptocurrency exchange Naijacrypto has revealed plans to launch some products and onboard significant liquidity unto its platform.

The firm made this known via its Facebook page that in the coming weeks, it will launch a cryptocurrency Verve powered debit card. According to Naijacrypto, “users no longer have to endure excessive transaction fees and complicated crypto-fiat conversion procedures…”.

Through a partnership secured by a major player in the global cryptocurrency market, Naijacrypto reveals it will onboard significant liquidity which will allow users to enjoy instant filing of orders, faster transactions and lower price quotes. This achievement according to the firm “represents the culmination of months-long efforts to improve and increase the liquidity on the exchange and achieve greater stability as well as boost transaction efficiency for traders and merchants.”

See ➡ How liquidity Influences the choice of crypto investors

The launch of Naijacrypto Academy

In the coming weeks, the firm has revealed it will launch an academy that will help to drive cryptocurrency education. This initiative according to the firm was a response to community requests.  The academy will form a “key educational arm of the Naijacrypto ecosystem whose function is to educate users as well as the general public on the basics of blockchain technology and cryptocurrencies”

See ➡ How to Choose the Best Cryptocurrency Exchange to Trade

These initiatives according to the firm is to essentially cement its place as Nigerian’s leading crypto-exchange.

Based in Lagos, Nigeria, Naijacrypto is a cryptocurrency exchange platform offering state-of-the-art services, access to an OTC market for a wide selection of digital assets.

The firm’s strategy focuses on providing unparalleled support, tools, and innovation for professional traders and liquidity providers around the world. 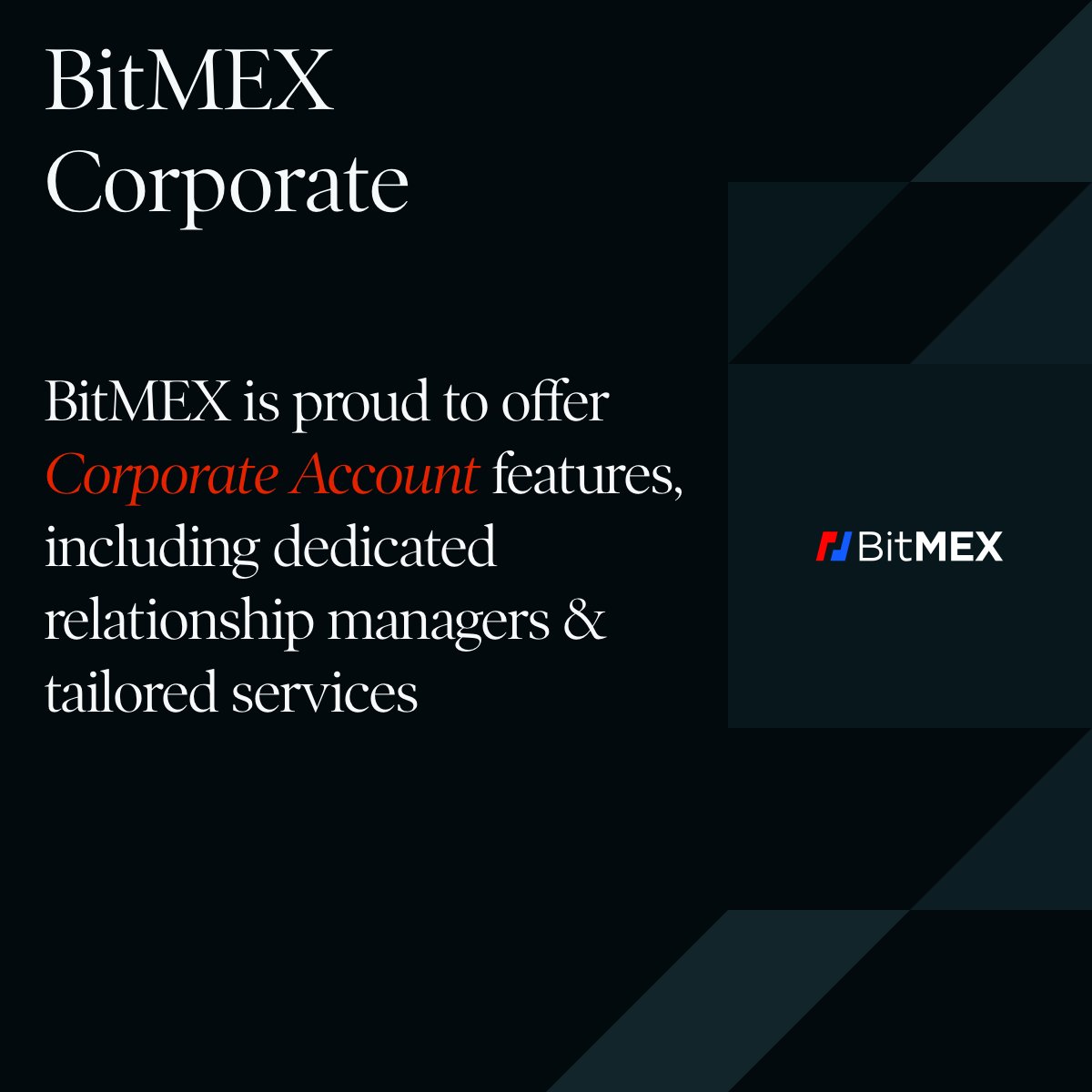 Top Margin Trading platform BitMEX announced it now offers Corporate account features to its customers. The Corporate account according to BitMEX is designed for customers who are not individual entities but a company or any other legal entity whose ownership structure differs from other individual traders and will require unique ways for their employees to access and manage accounts on its behalf.

Founded in 2014 by Arthur Hayes, Ben Delo and Samuel Reed, BitMEX grew to become a leader in my crypto trading market. BitMEX averages a trading volume of over 150,000 BTCs valued over a billion dollars with the bitcoin market taking a significant share of the trade volume.

The firm also disclosed that high volume Corporate Accounts are also eligible for the Tiered Account Schemes benefits such as increase in trade limit thresholds linked to trading behaviour and having their opinions heard regarding products and features development.

BitMEX has stated that the only type of account that’s eligible are accounts that are not owned and managed by an individual. And that the Corporate Account customers will enjoy future benefits such as invitation to be part of its Early Access programmes for ongoing product and service enhancements, with Sub-Account and Inter-Account instant transfer features and Multi-User Login capabilities due to be launched later in the year. 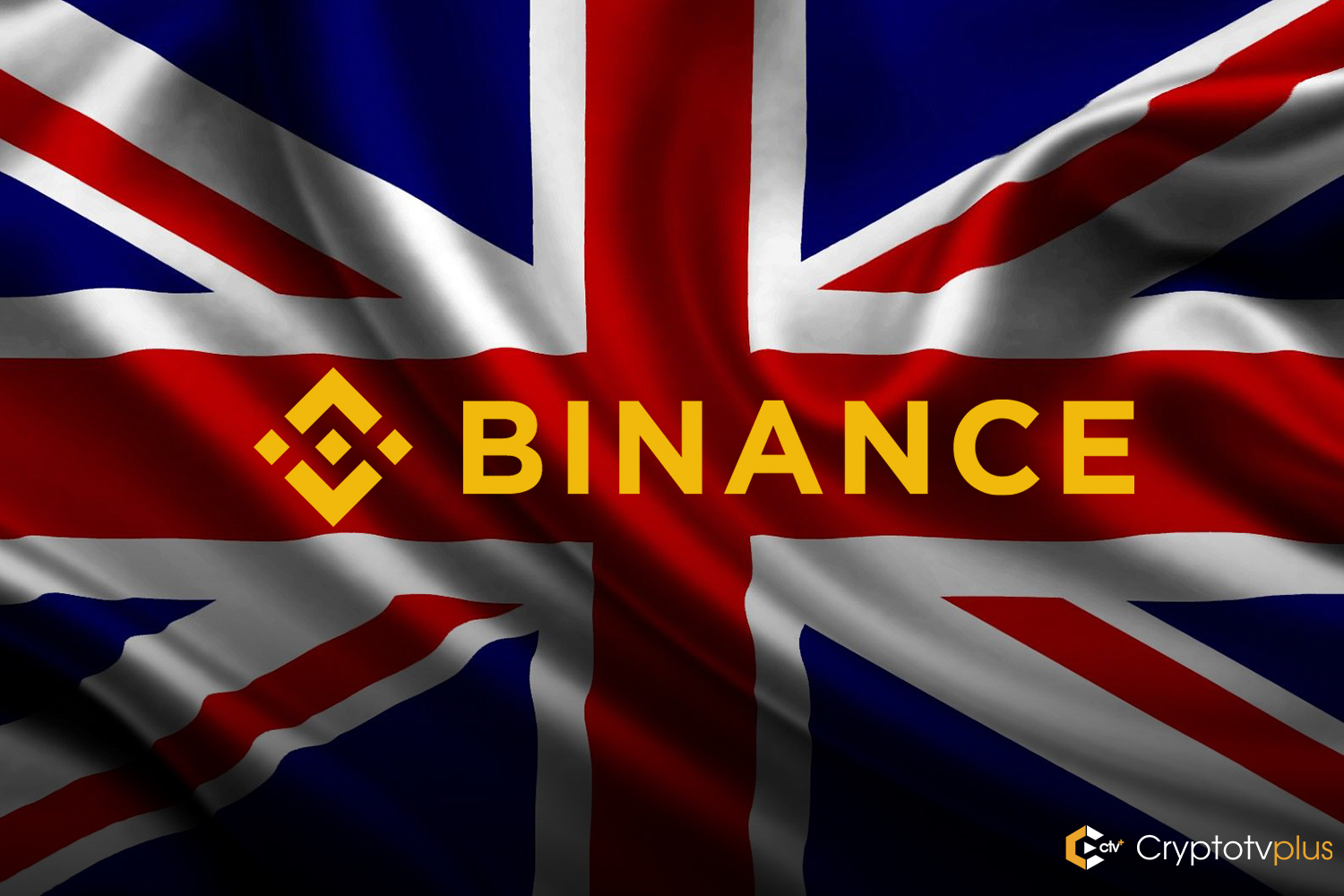 Global blockchain firm and ecosystem giant Binance has revealed it will launch a cryptocurrency trading platform in the United Kingdom in the third quarter of the year.

The platform according to Binance was designed to allow the purchase of cryptocurrencies using the pounds and the euros by both institutional and retail investors. Binance also disclosed the platform will be regulated by the UK Financial Conduct Authority.

The trading platform will feature upto 65 cryptocurrencies at launch and will provide deposits and withdrawals for buying and selling digital currencies through direct bank transfers via the UK Faster Payments Services and the Single Euro Payments Area network.

The Binance UK Director Teana Baker-Taylor speaking to Reuters on this said “Interest and participation in the UK digital asset markets is growing; not just in-depth with its current participants, but also in breadth”. She went further saying “

She went further saying “As crypto services mature and evolve, we’re able to create new options to engage and capture interest from a wider audience with varying risk appetites, such as products that earn a yield for participation, like staking and passive savings”

Acquisitions & Launch in other territories

Aside these expansion moves, Binance has also acquired several firms over the last 12 months and recent amongst this is the popular cryptocurrency market data aggregator CoinMarketCap which was hinted to have been acquired for about $400 million.

How to Choose the Best Cryptocurrency Exchange to Trade 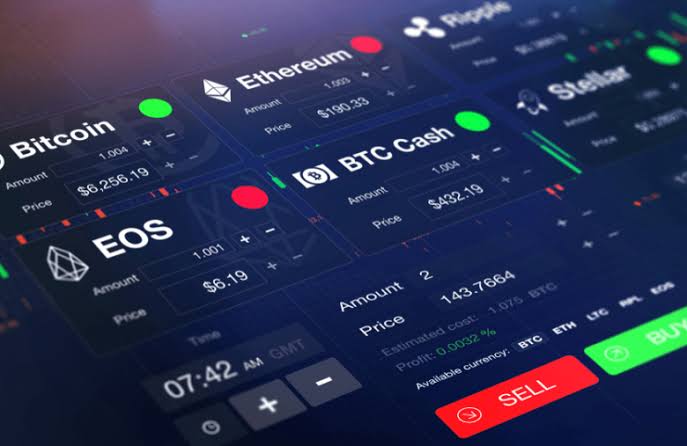 It is no longer a thing of contention that cryptocurrency has come to stay. Cryptocurrency however the resistance from some notable quarters and naysayers who continually predict doom of this innovation is the latest evolution of money.

As a novel innovation in its early days, Bitcoin the first cryptocurrency was of little significance. The value of one bitcoin was less than a cent; yet, today it stands tall and currently valued at over $9,000 (N4M+).

The astronomical growth in bitcoin over its years since creation is why the cryptocurrency has been named as one of the best performing assets in a decade. Bitcoin beats other assets as its graph shows a progressive rise however moments of significant drop in price.

As the novelty behind bitcoin began to see interest, other cryptocurrencies also sprung up with each doing something similar or something entirely different, yet enabling the exchange of value across borders. Currently there are more cryptocurrencies existing than can be imagined. Some are in the market and tradable at the moment, others are not.

The borderless nature of cryptocurrencies allows anyone to spend/send cryptocurrencies anywhere and at any time. The need to easily send value across a wide geographical area and have it easily converted to readily spendable and acceptable local currency has necessitated the creation of a various cryptocurrency markets spread across the globe.

It’s no doubt that with the continuous rise of cryptocurrency exchanges around the world owing to the promises which abound in the industry, many bad actors and sometimes poorly run exchanges will spring up and this will have its impact on users who utilizes these exchange platforms. In fact, history has shown that multiple exchanges have collapsed. Some were of hacks, mismanagement and some also are just outright fraud on the part of the operators.

So for anyone who wishes to trade cryptocurrencies, below are some of the things to look at for.

1.  The identity of the exchange

This point may seem really weird and maybe because of the word “identity”, but that’s actually a word that captures the entirety of what this point is about. Every serious business is expected to be registered somewhere. It’s imperative that before sending your funds into any cryptocurrency advertised for trading, you conduct your own due diligence.

The location where the exchange is registered should be checked and the address given should also be considered to know if it is actually legit. In Nigeria for example, every company is expected to register with the Corporate Affairs Commission. A simple search of the exchange name on the company’s registry should bring out enough information about the exchange.

It should be expected that the name of an exchange may not appear on a company registry search, this is because a company registered my name on its exchange (maybe one of its products) something else. An example is a Company CryptoTVPlus naming its product CryptoEx. As a potential exchange user, you should also run a background check on the website to know when it’s started operations.

You also want to check the people running the exchange. If they do not have a public profile, it’s best to stay away from such exchange platforms. They are not satoshi. It’s imperative to know who is behind the platform where you will commit your hard earned money for trading.

The legality of their operation is a key to deciding if you will commit your funds into their platform.

These are some of the information to check to understand the identity of an exchange.

2.  Liquidity of the exchange

Liquidity plays a huge role in the continuous operation of an exchange. Liquidity simply means you are able to buy and sell your cryptocurrencies on an exchange without delay or any other trouble. Take for example, it’s very easy to buy and sell milk in Nigeria and anywhere in the world. This is because there’s demand and supply adequately.

Securing user funds should be of great significance to an exchange and any exchange which doesn’t do such shouldn’t be traded on.

The industry is not as strong as the traditional finance industry where insurance players insure firms, however, though it’s getting there little by little, exchanges are creating funds to help against exchange hacks and possible thefts.

A potential exchange user should ensure he/she conducts due diligence on the exchange before sending in funds to trade. The user is also expected to keep his funds in his/her own wallet where he can control the keys else, in cases of eventual hacks, the funds could be lost.

The points of choosing the best of exchanges is not an exhaustible topic, this is so because the industry is growing at an impressive rate and newer challenges are coming up as old ones are getting solved. 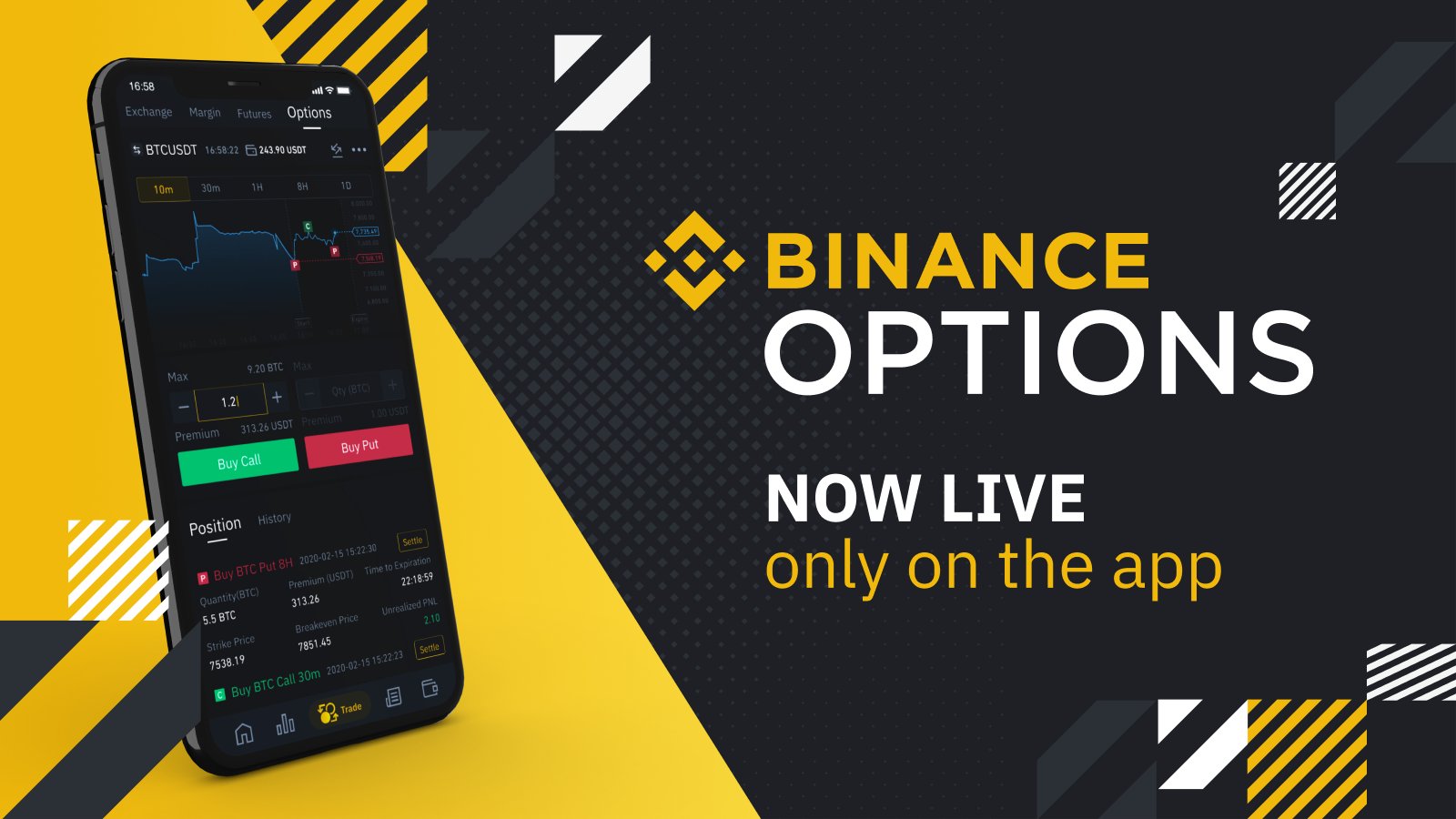 Binance has announced the launch of its Option Trading platform on its Mobile Apps. The platform which is available on the latest update of the exchange’s Mobile App was recently released allows the millions of users on the Binance ecosystem to trade on various markets.

“Options are contracts that give the bearer the right, but not the obligation, to either buy or sell an amount of some underlying asset at a pre-determined price at or before the contract expires”. Options can be based on a wide range of underlying assets, including stocks, commodities, indices, currencies, cryptocurrencies or even another derivative product.

The Binance Options platform according to Binance offers users a lower entry barrier and provides flexibility required by option traders. With this platform, Binance allows users to take advantage of the price movement of assets within different time frames and enjoy the rewards therefore.

According to Binance, the Binance Options is an American style option which executes traders contracts anytime before the expiration date. The firm boasts of an intuitive design to enhance traders’ trading experience, unlike traditional options products and of a shorter time frame compared to traditional options that range from 10 mins to 1 day.

Arguing further, Binance said traditional options products are less liquid especially such that are far “out of money”. In order to avoid this, the Binance Options are ‘designed with only one strike price which is equivalent to the contract price on Binance Futures’.

The firm continues to marshal on taking giant strides in the industry with its acquisitions, partnerships and launch of new products. Binance which started operations in 2017 continues to against varying odds build a giant and global ecosystem.

The launch of the Binance Options represents the lastest of the many strides which the ecosystem giant is making. Recently, it acquired popular crypto market data aggregator Coinmarketcap and it also announced intention to go into the cryptocurrency mining business.