All you need to know about Arweave
Advertisement 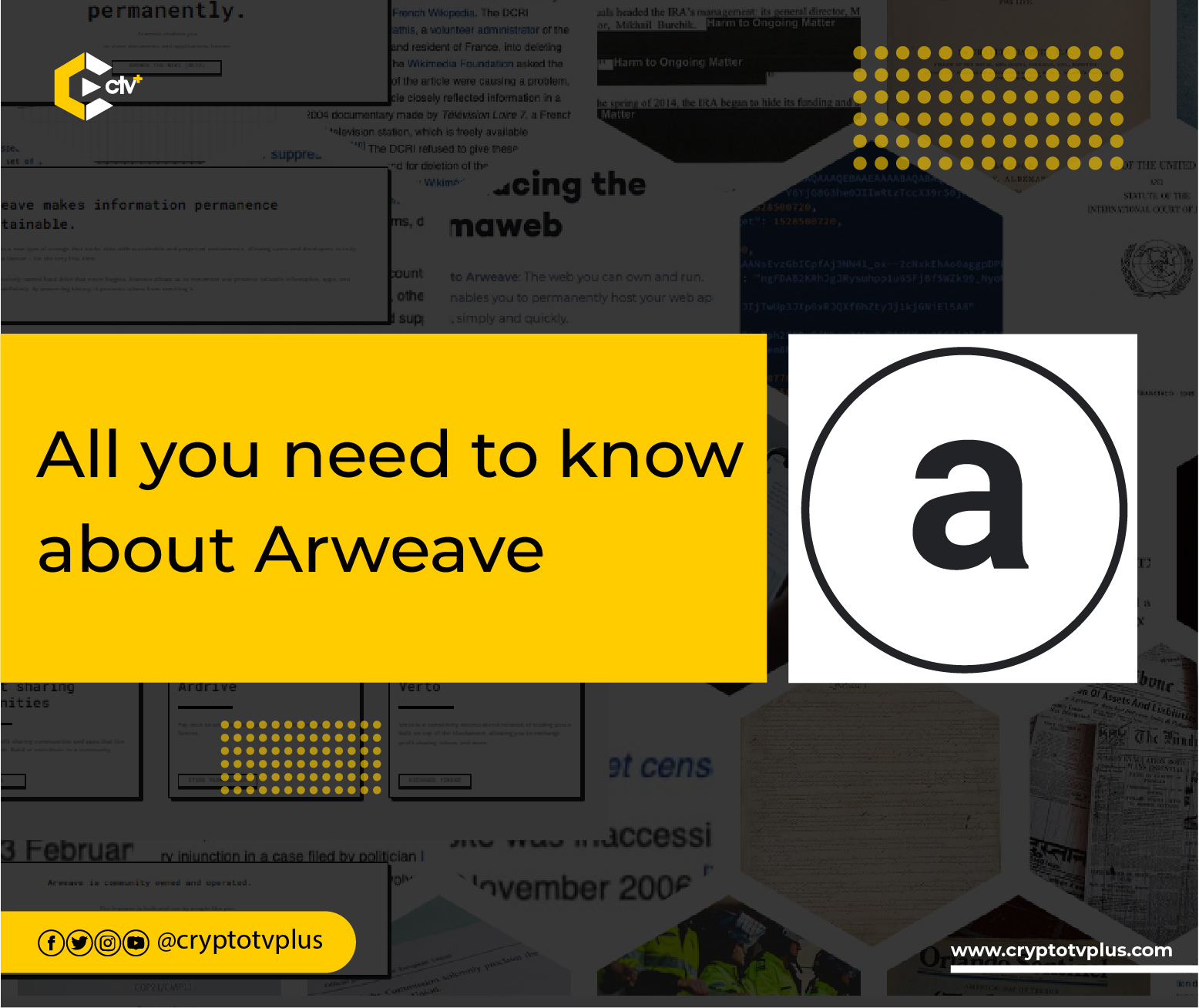 The way to store data has evolved over the years from huge storage devices with small storage sizes to more sophisticated storage systems that hold incredible amounts of data in very tinyl devices. From local storage, the world has now evolved to online or cloud storage, allowing for unprecedented amounts of storage space. Cloud servers can retain a complete record of our life, keeping absolutely everything from professional documents to personal images and movies from our smartphones, tablets, and PCs.

Centralized data storage has increased speed, availability, quick throughput, and low latency, but these advantages come at a price. Large cloud storage providers that dominate the market, like Google and others are frequently suspected of working with the government and allowing them access to sensitive information.

To address the issues raised by the high costs, vulnerability, and exposure of sensitive information associated with centralized data storage, a new system of recording and storing information in a way that makes it difficult or impossible to alter, hack, or cheat the system was introduced. It is called blockchains.

Arweave is a blockchain-like technology that allows the storage of data indefinitely and sustainably. The technology connects those with extra storage space with others who need to permanently host content or store data.

Simply put, Arweave is a technology that can let anyone permanently store data.

The technology, which describes itself as “a collectively owned hard drive that never forgets,” principally hosts “the permaweb,” a permanent, decentralized web featuring several community-driven services and platforms.

Aside from storage, the Arweave network is a platform for developers wanting to design more efficient decentralized applications. The network’s adaptable APIs enable programmers to construct DApps seamlessly over blockweave. On the Arweave blockchain, approximately 300 DApps are currently operational.

Since data is never stored permanently on traditional blockchains, accessing it always comes with a fee. A decentralized low-cost data storage technology that can scale is essential due to the exponential increase in demand for data storage.

Arweave aims to ensure the collective ability to preserve and share information between individuals and across time to new generations. This is achieved by using Arweave’s “blockweave,” a variant of blockchain technology where each block is linked to both the one before it and a random older one, as the foundation for its flagship permaweb. This is to encourage miners to keep more data since they must have access to arbitrary old blocks to add new ones and earn incentives.

Also, Arweave’s objective is to create a resilient ecosystem for the network. It introduced profit-sharing communities (PSCs) that enable developers to get dividends when network transaction fees are generated by their application, and it runs incubators to assist the development of Perma web-based apps.

The project also collaborates with startups through its Boost initiative, providing free storage and access to the Arweave team and business investors.

How does Arweave work?

The Arweave network is based on a modified version of blockchain technology known as “blockweave,” which employs a “proof-of-access” consensus method – a variant of proof-of-work.

Arweave is built and works upon four essential technologies:

The first node is the block hash list, which lists all previous blocks’ hashes. It enables old blocks to be confirmed and potential new blocks to be appropriately appraised.

The second node is the wallet list, which contains a list of all active wallets in the system. This enables transactions to be confirmed without having access to the block in which the previous transaction was used.

Blockshadowing functions by partially separating transactions from blocks and only transmitting a small “shadow” of a block between nodes, allowing peers to reconstruct the entire block.

AR is the native token of the Arweave blockchain. It has a maximum token supply of 66 million AR. Over 55 million of the 66 million maximum supply were minted in the genesis block upon the launch of the Arweave manniet in June 2018. The remainder of the tokens will be issued as block rewards to Arweave nodes. As of the time of writing, there are 3,394,701.00 AR tokens in circulation.

On the Arweave network, all transaction costs must initially be paid in AR. This covers the costs associated with storing and retrieving data and interacting with various DApps built on the network.

AR must be used to cover the cost of distributed data storage for users who want to store data on the Arweave blockchain. Additionally, all machines on the network that provide storage services are required only to accept AR tokens as payment.

Sam Williams and William Jones, two Ph.D. students at the University of Kent, founded Arweave. Jones was more interested in graph theory and neural networking, while Williams brought experience with decentralized and distributed systems to the project.

Williams had created an operating system called HydrOS as part of his academic work. Jones quit the project early in mid-2018 and finished his Ph.D., while Williams left graduate school to concentrate on the company.

Following the launch of Arweave, Williams was appointed an advisor to Minespider, a business that offers blockchain-based supply chain tracking for the raw materials market, and he has acted as a mentor for the Techstars accelerator program.

Despite having centralized leadership at its inception, Arweave formed a decentralized autonomous organization (ARDAO) in January 2020, made up of key community members, to advance the growth and development of the network and its ecosystem.