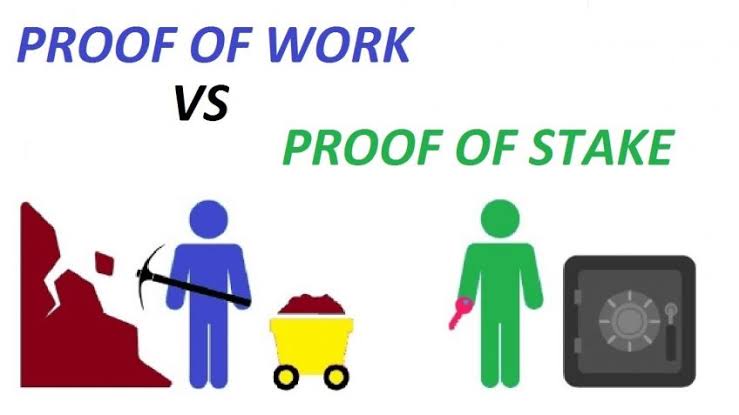 -by Favour Uche and Taiwo Lawal

The Proof-of-Work is a consensus algorithm system- a computer science procedure used to come to an agreement/consensus on a single data value among distributed systems or processes- which is utilized in ascertaining on-chain actions thereby mining or creating new blocks on a blockchain.

With this consensus algorithm system, miners on the chain compete to finish up transactions on the blockchain so as to get the returns. Users on a blockchain transfer coins to each other and a miner via Decentralized Ledger Technology collects all the transactions together into several blocks.

Proof of Work Gives Miners the Right to Create a Block

To effectively solve the double-spending/Byzantine General’s problem, the Bitcoin system was programmed with the Proof-of-Work (PoW) consensus algorithm. The essence of this algorithm is to verify and add transactions on the Bitcoin network by making miner nodes compete against each other to solve complex computational puzzles. Any miner node who comes up with a solution verified as correct by the other nodes gets the right to broadcast the new block to the network and receive block rewards. In other words, a miner node cannot add a new block to the Bitcoin blockchain unless there is proof that it has worked for it.

The Proof-of-Work consensus algorithm currently accounts for more than 90% of the total market capitalization of existing digital currencies. It offers benefits such as increased security.

To effectively hack a Proof-of-Work powered blockchain network, a malicious miner node would have to have 51% of hashing power which is an extremely cumbersome and costly task. However, it is not without its problems. Issues like cost of hardware and huge computational power and electricity needed to mine has led various blockchain thought leaders to reconsider its use. This is where the Proof-of-Stake (PoS) consensus algorithm comes in.

The PoS Era is Based on How Much Tokens You Got

With the Proof of Stake, an investor can only validate or mine block transactions per the tokens he can prove he holds.  In essence, an investor’s mining or validating power is based on the amount of crypto he has.

The Proof-of-Stake consensus algorithm was introduced in 2011 on the Bitcointalk forum to solve the problems of the Proof-of-Work system. Transaction blocks in this system are forged by validators and not mined. To be given the opportunity to forge new blocks, validators must stake some of their coins on the network. Malicious nodes lose their stakes. Selected validator nodes who forge valid blocks are rewarded with transaction fees. One of the major benefits of Proof-of-Stake system over Proof-of-Work is that it utilizes less power thereby leaving a smaller carbon footprint on the earth. Also, there is the benefit of security; malicious validator nodes have to own 51% of the coins on the network to hack it which is virtually impossible without early detection.

In all this, it is still unsure how possible it is for the Proof-of-Stake system to outshine the Proof-of-Work system. This is because to date it has only been applied in small scale blockchain platforms. However, it is hoped that with the new development of Ethereum 2.0, a suitable case study on its wide scale application can be brought forward. Blockchain platforms are however advised to take into consideration their unique factors when deciding which consensus algorithm to use to facilitate efficiency.