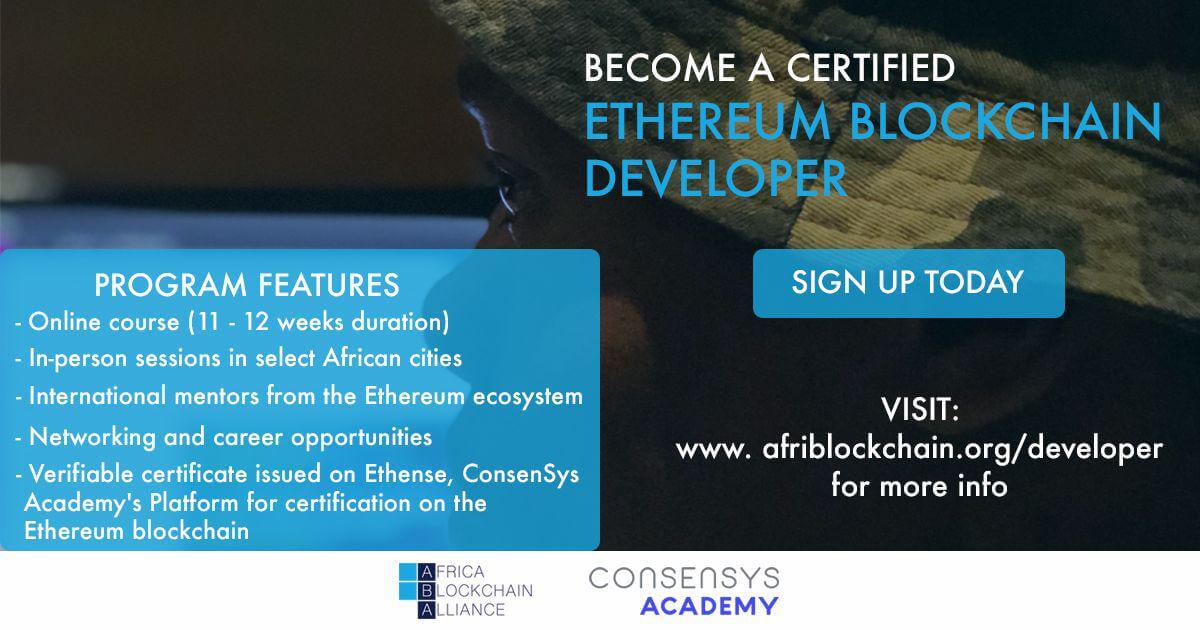 The program was launched earlier this year in partnership with ConsenSys Academy, the educational arm of ConsenSys, a market-leading blockchain technology company.

According to Africa Blockchain Alliance, their vision with the program is to train 1000 blockchain developers across Africa and empower them with the tools they need to leverage blockchain to solve some of the pressing problems in Africa and the world.

The developers on the course will have access to dedicated mentors who will have weekly office hours with them for 1 to 2 hours per week and answer their questions daily. Developers will also have unlimited access to an online forum with over 2,000 developers who are all current and past developers trained by Consensys Academy.

The program will run for a period of 11 to 12 weeks (approximately 3 months) starting from August 2019. On successful completion of the program, graduates will be issued certificates on the Ethereum blockchain and given the opportunity to work on blockchain projects in Africa and around the world.

“This course is great. It teaches you about the blockchain ecosystem and how they interact with each other. You’ll learn how to use tools such as Truffle, Solidity, Ganache etc. It’s a course that’s for anyone going into blockchain development.” ~ Valentine Ahiwe (Nigeria)

Africa Blockchain Alliance will also be sponsoring a number of developers to the program through a $10,000 grant from Consensys Grants for the program. Developers that cannot afford the full cost of the program can apply for the scholarship.

You can find out more about the program and apply from the program website: https://afriblockchain.org/developer/

Why Trump's bashing on bitcoin is a milestone achieved to cryptocurrencies

ARE OFFLINE COLD WALLET STORAGES REALLY AS SECURED AS PERCEIVED?