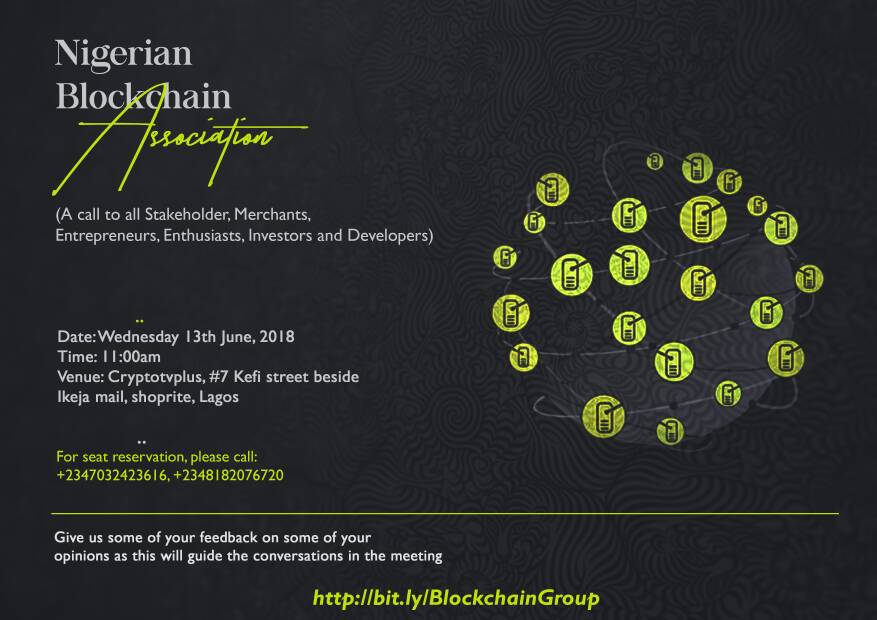 Nigerian cryptoprenuers and Blockchain enthusiasts have taken it upon themselves to spread the gospel of the blockchain technology. The West African country had hosted a number of blockchain and cryptocurrency conferences, meetups, events and hackathons. It seems however that while the blockchain and cryptocurrency community is enthusiastic about the technology the government has laid doormat. This has to lead to some concerns in the blockchain community and the Nigerian Blockchain association has decided to put a call across to stakeholders, crypto enthusiasts, developers, entrepreneurs to discuss on how to move the industry forward.
As it stands, the Nigerian lawmakers had deliberated earlier in January on the widespread use of digital currency, bitcoin, and Ponzi schemes in the nation and the Central Bank of Nigeria had even dubbed cryptocurrency a risky venture. A motion titled, ‘ The Urgent Need to Investigate the Proliferation of Bitcoin, a form of Crypto-currency, to ascertain the worthiness of same as a form of investment in Nigeria’ was pushed by the Senate. It was stressed that bitcoin had become one of the best forms of investment in the country that was openly marketed both across the country and internationally. It was stressed that most Nigerians were not aware of the consequences of cryptocurrencies.
However, in April a Nigerian lawmaker Hon. Solomon filed the  motion on “the need to regulate blockchain technology and the internet of things.” He called on the house that there was a need to first and foremost understand the technology before regulating its use. The big question now is what has the investigation yielded? The Nigerian government has been silent on the topic of the blockchain. Well, it is to be expected as the nation is preparing for its presidential election some time in 2019.
The desire to move the blockchain industry forward is a pressing one. If the people could adopt the technology, the government will have no choice but to adopt it. The Nigerian Blockchain Association has decided to be a voice in Nigeria and pave a way for the blockchain technology to touch lives in Nigeria. The aim is for the technology to create employment, reduce corruption and enhance transactions. The Nigerian Blockchain Association will be holding a stakeholders meeting on the 13th of June, 2018 at No7, Kafi Street, Ikeja shopping mall Lagos, Nigeria. So, if you are a crypto-blockchain enthusiast, find your way too Cryptotvplus. It is time to make decisions that matter.

What do you think about the Nigerian Blockchain Association? Share your opinion with us in the comment section below.

Cryptocurrency is Gaining Ground in Africa