Coinsource announced that it will install 20 Bitcoin ATMs across the District of Columbia and Maryland. This development is coming as a result of the increasing demand of Bitcoin ATMs, as a result, it would bring the total number of ATMs to a total of 182 Coinsource machines operating in 18 states.
Coinsource, one of the largest Bitcoin ATM networks last November announced the installation of 2o machines in Georgia. Subsequently, Coinsource installed ten more ATMs in Rhode Island, New Hampshire and Massachusetts. According to Coinsource CEO Sheffield Clark
Our goal is to give everyone the equal ability to access bitcoin, particularly in times of record demand, and participate in this soaring new economy. Part of making this marketplace accessible is making sure our fees are less than half that of any other operator, and customers will be given fee-free transactions for first-time use of any new machine.
On March, 8 more machines were installed in Colorado. The number of Bitcoin ATMs installed around the world is increasing at an exponential rate. The chart below shows the growth process. 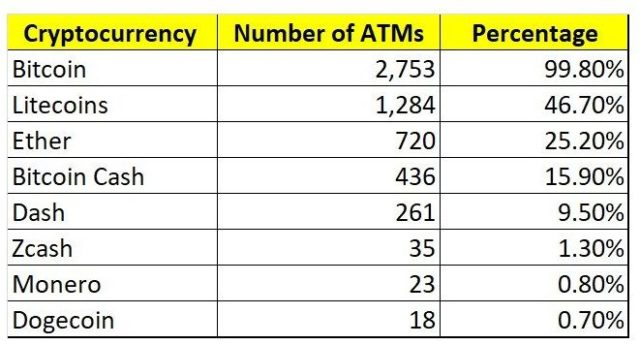 The growing installations of these machines are creating the support structure to make Bitcoin and other cryptocurrencies accessible. There are already 2,753 Bitcoin ATMs operating across the U.S, which represents 75.74 percent of the machines installed in the world.