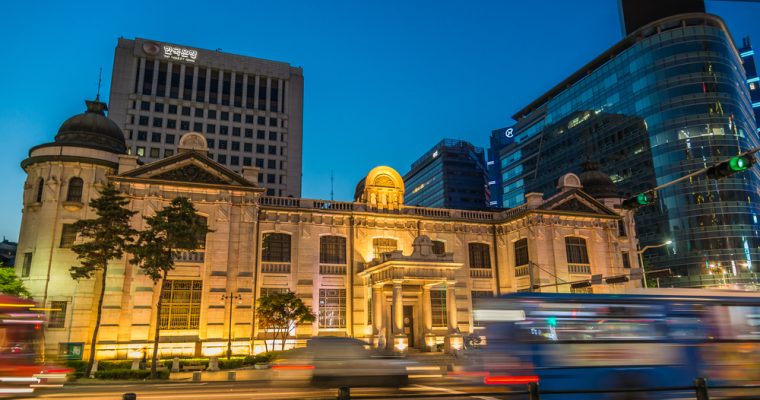 With the advent of the launch of a physical “smart banknotes” from an Indonesian company, the adoption of tokenization by other governments is imminent. South Korea is among the world’s largest trading markets for cryptocurrencies and has proven to be a hotbed for blockchain applications in a number of areas including shipping, registering a community vote for an entire province, retail insurance payments in Seoul and more.
The Bank of Korea is set to announce the possibilities of issuing a central bank digital currency as the study into cryptocurrencies in ongoing. According to a statement released on Wednesday, the Bank of Korea confirmed it was in the early stages of studying the blockchain technology and cryptocurrencies and the consequences of issuing them as a central bank, according to Korea Times.
The central bank revealed:
A task force has been studying the possibility of issuing a CBDC and how digital currencies will influence the country’s overall financial sector since January. We will announce updates on this issue by the end of June.
The move towards the digitalization and a cashless society is coming at a time when the issuance of physical cash by the central bank is on the decrease. Figures released from the central bank from 2016, shows 12.3 percent fewer 10,000 won (approx. $9.2) bank notes from the year before as Korean society is moving away from cash to electronic and mobile payments.
Considering its position as an authority in the financial institution, The Korean Central Bank was careful not to elaborate on the current facts as it would be premature to make any definite statements but insists it is keeping an eye on other endeavours by its counterparts globally.
Moving to a cashless society could also cut costs up to 1.1 percent of Korea’s GDP, according to analyst Kwak Hyun-soo at Shinhan Investment Corp. The Benefits of digitalizing financial services are enormous, with one of the benefit being able to track records of payments, transactions and financial activities in other to curb fraud and tax evasion.