Nigerian Lawmaker Pinpoints The Need for Legislation on Cryptocurrency 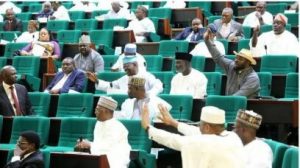 In a press release, a Nigerian lawmaker obviously pinpointed the need to formulate a legal framework or approach for cryptocurrencies. The House of Representatives speaker, Hon. Femi Gbajabiamila suggested this awesome idea when he hosted the board of NDIC (Nigerian Deposit Insurance Corporation) which paid him a courtesy visit. The Nigerian lawmaker raised this issue because he perceived that cryptocurrencies are becoming acceptable throughout the world in piecemeal. Consequently, having a legislative channel or framework for cryptocurrencies is very important as it will help to regulate cryptocurrency-related transactions and would in all likelihood make Nigeria not to be left out in this trending technology.
“On the issue of cryptocurrency, I think block-chain technology is novel and coming up strong. We don’t want to be left behind,” Gbajabiamila said.
“I’m aware that we trade on different platforms about $12 million on yearly basis in this country, and a lot of these things, as you said, are in the air but not captured. It is time we begin to look seriously at this advancement in technology,” he added.
He went on to recant how the world leaders are moving towards the trending technology. He was of the opinion that the world at large is taking the issue of blockchain and cryptocurrency seriously. And thus, he didn’t want Nigeria to be left out of the race.
“Not too long ago, a group of world leaders, G20 met in Osaka, Japan and one of the issues they discussed was block-chain technology and cryptocurrency. They had a sub-group of leaders called the V20 established from that meeting. It’s an assemblage of virtual currency representatives. I think the world is taking the issue of cryptocurrency and block-chain technology seriously. We don’t want to be left behind, and we have to take it seriously,” he said.
Speaking to the board of the Nigerian Deposit Insurance Corporation (NDIC) led by its chairman,  Ronke Sokefun, Gbajabiamila acknowledged the interest of the house to work with the corporation so that Nigeria won’t be left out of the advanced technology. He commented thus:
“The House is ready to work with you on that so that we don’t get left behind, and within legislation and regulation of block-chain application that will put Nigeria within that rank of advanced technology.
Ronke Sokefun, the chairman of NDIC had earlier spoke about the courtesy visit, stressing that it was meant to felicitate the Nigerian Lawmaker, Gbajabiamila, on his emergency. And also to let him be aware of the fundamental roles NDIC plays in the country’s financial sector. Ronke equally recanted the successes of the corporation for the past three decades of its operation, particularly hinting that the corporation had received three international standards certification (first Nigerian public sector to receive such credit).
Gbajabiamila also clearly stated that he had faith the mandate of the corporation would be very important to the financial sector of the country’s economy. He commented in a statement signed By Lanre Laisi, his Media Adviser, that the house would structure the agency in such a way as to avoid a clash of functions between the agency and the central bank of Nigeria. He then assured the corporation that the house would always listen to them and would always welcome recommendations pertaining to the collaborative expectations.
“There seems to be a blurry line over some of your functions and that of CBN: some overlapping functions. I think we need to structure NDIC so that the lines are clearly defined. I’m sure if that hasn’t happened already, there will be times, if not now but in the future when those grey areas might cause issues between you and the CBN”

Basic Information a Newbie Must Have Before Plunging Into Cryptocurrency