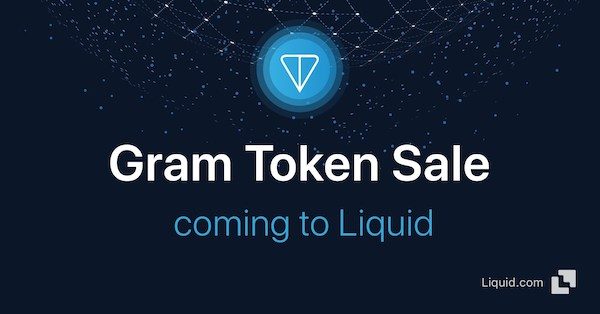 Japan’s top cryptocurrency exchange Liquid has announced the upcoming Public Sale launch of Telegram digital asset token for the (Telegram Open Network).
As reported by Finance Magnates, this development is made possible by Liquid’s recent partnership with Gram Asia, the largest holder of the native token of TON blockchain in Asia. Public Sale for the TON token will commence by 10th of July 8 am UTC and is open to accredited LIQUID Exchange users. Interested participants in the public sale are also expected to have enough funds in their accounts.
Excited Mike Kayamori, co-founder and CEO of Liquid, “We are excited to be partnering with Gram Asia to launch the Gram token sale, which is wonderful news to our community who are native users of Telegram. We share the vision for a more secure and open value transfer system in order to enable the mainstream adoption of cryptocurrencies.” said.
It should be noted Telegram organized a private sale in 2017 when it announced plans to launch its own Blockchain and native token via the no longer popular ICO. It raised a total of $1.7 billion via private sale as at March 2018 making it the second largest amount raised through ICO second only to Block.one’s EOSIO which still ranks tops after raising over $4 billion.
“The TON Blockchain infrastructure can help enhance Telegram’s current capabilities as a peer to peer network of value, with the launch of their cryptocurrency light wallets for Telegram’s highly engaged user base,” Kayamori continued.
As TON is expected on its own Blockchain, Liquid Exchange will make provision for integration of the TON compatible wallet where investors are expected to receive TON tokens upon the launch of TON Mainnet which is expected to go live by October 2019. As Japan’s first FSA licensed global exchange, it assures its users of an unconditional refund should the initial plans not follow through by the TON Team.

“As the first Japan FSA licensed global exchange, Liquid has demonstrated strong governance capabilities for protecting its users; therefore, I firmly believe Liquid is the right partner to launch this historic token sale. We are excited to invite all believers in Telegram’s vision, globally and in Asia, to build on top of TON, leveraging the critical mass of Telegram’s user base.” Dongbeom Kim, founder and CEO of Gram Asia, said.