We are not at Home with Cryptocurrency – CBN Governor
Advertisement 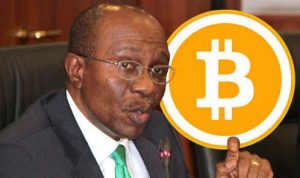 Taking further steps in openly stating its non-acceptance of cryptocurrency, the CBN Governor, Godwin Emefiele, who was represented by the Director Banking and Payment System Department, Dopo Fatoku, gave a rather interesting speech at the Vanguard Economic Forum Series on Financial Technology (FINTECH), Lagos.
In his speech,the CBN governor pointed out and I quote “Blockchain is a distributed Ledger Technology and we are at home with it and we know that it could be used for many good things especially in the financial services and industry.
But further in his speech, he then gave his reasons why the authorities were not in support of Cryptocurrency (one of the products acively used on the Blockchain). Among His reasons were that there is no issuing authority and according to him, this was a major challenge for Regulation. He backs his claim on notions that the supposed researches done by the English, Canadian and Monetary Authority of Singapore do not approve the use of Cryptocurrency for Central Banks.
Meanwhile the members and analysts from Blockchain Association of Nigeria (BAN), in a closed group conversation had a lot to say about this.
Mr Chimezie Chuta, coordinator Blockchain User Group Nigeria debunked the news above stating that this was not the official position of the CBN on cryptocurrency. He begged to question the authenticity of the publication.
Meanwhile, Mr Eze a member of BAN obviously opined that not having an issuing authority is the main idea of the crypto adding that it is a plus and that the idea of decentralization is what the Blockchain stands for. He takes solace in the fact that disruptive technologies never had Government endorsement not failing to add that the CBN Governor needed genuine education on the subject matter as all his statement reek with ignorance, biased information or pure mischief.
Also, Chimezie Chuta went ahead to point out that this could not be true as CBN recently did an internal restructuring that separates Banking from payments systems. Blockchain and its associated techs fall into the later. Even though the opinions from the former remains legit, it carries less weight. In his lengthy speech he said that official positions begin with an official definition, which the CBN are yet to give. Hence the need for clarification.
So in Chuta’s opinion, the remarks does not have CBN’s support. Another question is do the CBN really believe that the current players in the crypto space of Nigeria are small and insignificant?
The chief initiator of the conversation, Senator Ihenyen in trying to bring the house together, asked these questions;
Is CBN manipulating Nigerians About cryptocurrency through the use of media?
Is the media manipulating Nigerians about crypto by misquoting CBN or is it that some big interested persons are manipulating the media about cryptocurrency?
The answers to these questions vary from opinion to opinion but the summary remains that whether or not there is manipulation, the sole possible reasons for this could be because no one wants to be held directly responsible for the direct outcome which a clear statement will bring. Thus, ambiguity is the choice of all playing parties.
The questions still remains, if this were to be the case, when would the talks for regulation gain footings in the Nigeria economic market?

Inconclusive Election in Nigeria, What can the Blockchain do?