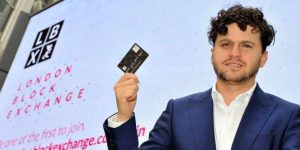 LBX CEO Benjamin Dives
Driving adoption of cryptocurrency in any economic state is not as easy as it sounds. With the recent state of things happening in the space a lot of kudos would have to be given to LBX for such huge step it is taking in launching the first ever Pound-backed Cryptocurrency.
The London Block Exchange has most recently made known her intentions to launch the LBXPeg which is also known as “stablecoin”. In a recently published article by  Business Insider on the 29th of September 2018, the said Exchange was permitted by their banking partner to move forward with the project.  This would be backed by UK’s Sterling reserves with one-for-one ratio and held in an account at the third party bank.
LBX’s latest plans are fueled by the high activity rate and interests in “stablecoins.” These are cryptocurrencies where the price is pegged to real-world assets, usually the dollar like in the case of the Tether. This simply is to give cryptocurrencies what is called price stability of a mainstream currency while also still retaining their compatibility and digital nature.
Benjamin Dives, with the help of a Professional Accounting company, plans to introduce auditing of the UK Sterling reserves as part of ways to ensure transparency. In his speech, Dives showed great confidence in the LBXPeg Stablecoin and assured that minting of the token would be in ten days.
Amongst the 50 stable coins, LBXPeg is proud to be the first coin pegged to the British pound and this affords it specific regional advatages over existing stablecoins . In addition, the use case of the new cryptopound would be for OTC trades in the london market and also in commonwealth exchanges where there do not have fiat banking and then securities token who want to pay dividends in a cryptopound.

We are not at Home with Cryptocurrency – CBN Governor