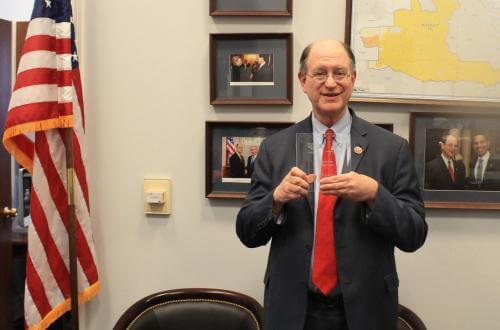 Ben Sherman a member of the United Congress yesterday sought to propose a bill to totally outlaw cryptocurrencies citing sanctions evasion as his top of several reasons.
In a session on Congress, the Congressman from California, a Democrat member seeks to propose a bill and asked for support from his colleagues in the house stating

Today in Congress Rep. Sherman called for a bill to ban all cryptocurrencies.

This is why Coin Center is needed in DC now more than ever. pic.twitter.com/jgikm7z8bI

I look for colleagues to join with me in introducing a bill to outlaw cryptocurrency purchases by Americans, so that we nip this in the bud, in part because an awful lot of our international power comes from the fact that the dollar is the standard unit of international finance and transactions. It is the announced purpose of the supporters of cryptocurrency to take that power away from us, to put us in a position where the most significant sanctions we have on Iran, for example, would become irrelevant.

Already being shredded across social media by the vast community of crypto enthusiasts, with evidence flying around on how the US Congressman has a credit card processing company as his largest campaign donor that has been indicted and fined millions of dollars for facilitating illegal gambling, hence his open stance on the matter.  Ben Sherman’s grounds for proposing such anti-crypto law is not totally out of place especially when the premise of international sanctions is the crux of the matter.
https://twitter.com/TheCryptoDog/status/1019673334689120257?s=19
It’s important to note how swift the Donald Trump-led administration of the United States moved so fast to ban Venezuela’s Petro. The national cryptocurrency pushed forth by Maduro and known to be backed by oil, 1 Petro price equals 1 barrel of crude outlawing it and forbidding any US citizen or its allies from buying or transacting in it. This was created by the failed Socialist government of Venezuela to evade crippling sanctions and in a bid to redeem itself for its nations worthless currency already stampeded by hyper galloping inflation.
Iran also has been rumored to be working on plans of launching its national digital currency solely for the aim to bypass the biting sanctions the United States placed for pursuing its nuclear power ambition tagging it  a rogue and terrorist regime led by the Ayatollah of the 1973 Islamic Revolution that toppled the Shah of Iran.
Will this ever become a reality where an international power like the United States comes fully to ban Cryptocurrencies putting the likes of Coinbase, Kraken, the Gemini Exchange which are all US-based entities clearly doing well in the industry, out of business? Let’s see!