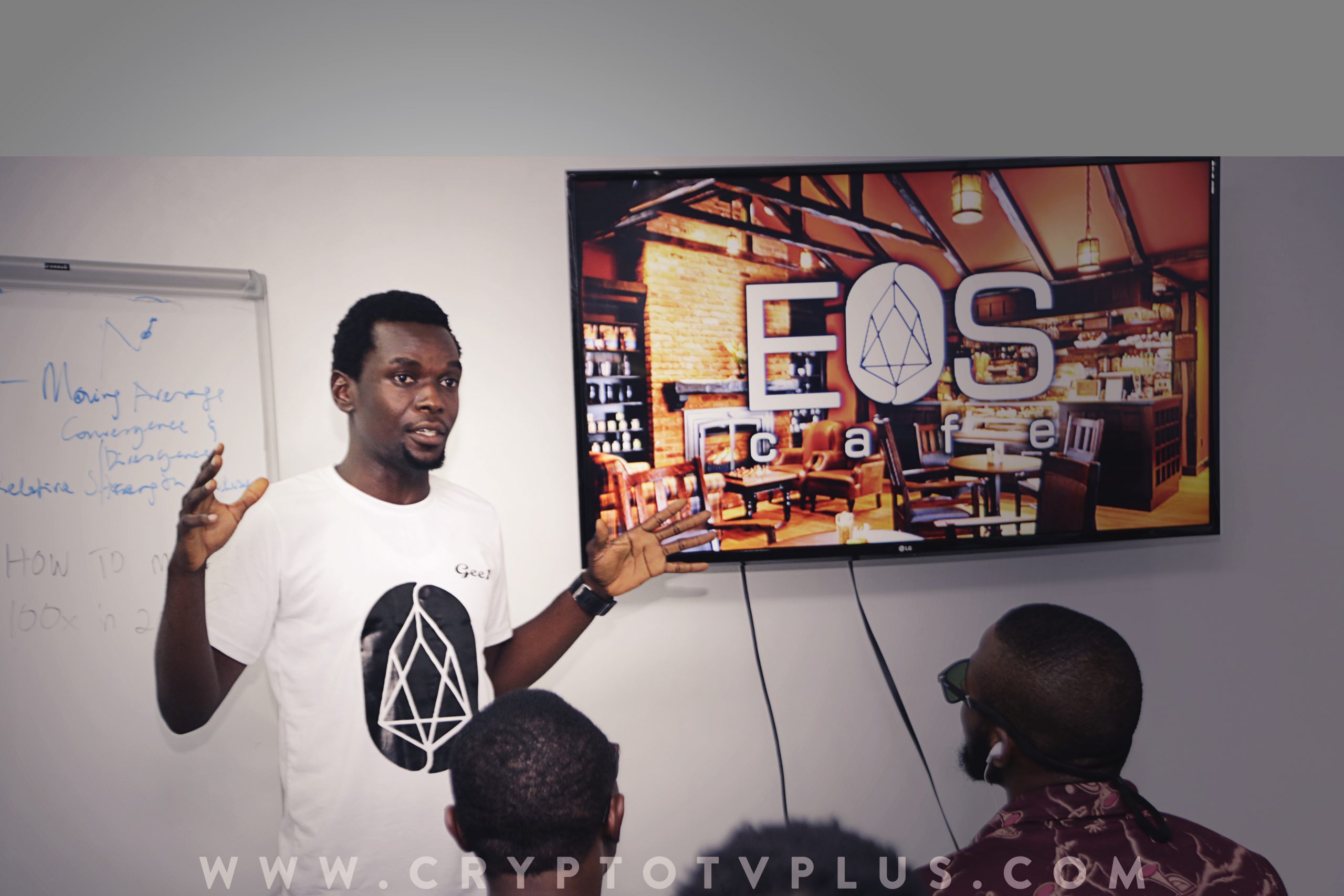 The EOS meetup was held on April 21, 2018, in Lagos, Nigeria. Crypto-enthusiasts, blockchain entrepreneurs, and investors came together to discuss the future of cryptocurrency and blockchain in Nigeria and the EOS blockchain.
The EOS meetup is the first EOS community meetup in Nigeria and its aim was to promote the use of the EOS, the blockchain technology.
The meetup had a turnup of over 50 participants, coming from all over Nigeria. The participation was quite encouraging as it was the first EOS community meetup in Nigeria.

A speaker at the event Mr Toju Kaka talked about the EOS Block producers and how The EOS blockchain does not centralised mining power in the hands of just a few individuals.

He also talked about how the DPOS delegates block producers to compete for the production of blocks, this means that the block producers have to prove to the community that they are capable and this also means that the block producers can be voted out. Thereby reducing the chances of a 51% attack.
Mr Toju Kaka also described who a block producer is and what his duties entail. “A block producer produces blocks, secures the network and adds value to the network. The value proposition means they need a physical place for the users to visit.”
Another guest speaker, Mr Babs talked about how investing in the EOS blockchain will profit early adopters. He used Steem as a point of reference and spoke on how the early adopters of Steem now profit from it.
In the course of the meetup, a video conference with Troy Braine who runs the EOS cafe was put up. Troy said that the cafe will be funding a real collaboration space in Nigeria with a budget of $4000. The space will be for enthusiasts who want to build DApps.
He also disclosed that there will be a DApps idea contest for ideas that can change Africa in particular and the world in general.  “There will be prizes for the Ideas and it will be launched on the EOS. Africa DApps idea space and its ambassadors will be working with me,”  Troy disclosed. He also said that the EOS.io blockchain will be launched in June.
SIDE ATTRACTION
One of the side attractions was when the Founder of Cryptotvplus, Mr Tony Emeka awarded Miss Susan Ihumeziem, popularly known as “Shushie”, with an ambassadorship for her contributions in the blockchain space especially for her advocacy for Women to be more involved in the cryptocurrency space.

In a statement; EOS blockchain is her prefered choice for building DApps according to her;
“EOS has a very high scalability and I love the fact that it is rising at a very fast rate. I also love the fact that you can build a whole lot on it and it is basically the future.” She also hopes to see more female participation in the blockchain space.

What you do think about EOS blockchain? Let’s hear from you in the comment section.