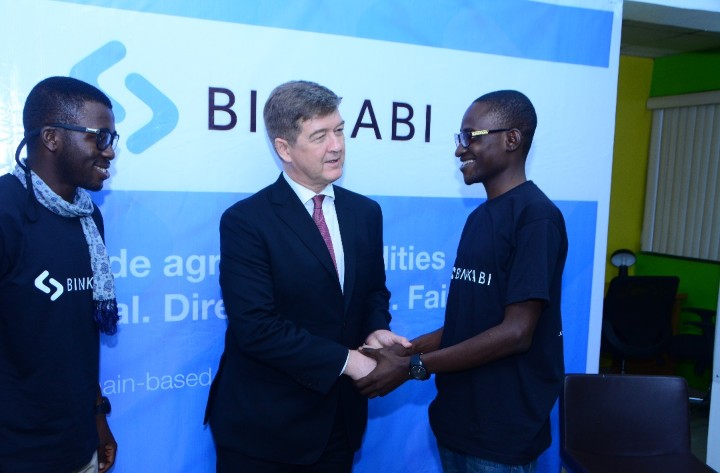 Chief Economist of Binkabi, Dr. Andrew S. Nevin and CEO, Quan Lee was live at the event where they talked about the blockchain technology and how they can move the agricultural sector forward in
Agriculture trading. They also spoke about tackling challenges in the agricultural supply chain with the use of a tokenized and
decentralised commodity trading platform. This method will be most useful in countries like Nigeria and developing economies across the world.

Binkabi is trying to play a key role in cross-border supply chain challenges faced by emerging markets. These challenges include poor market infrastructure and lack of finance, no coordination among key players, and lack of trust. The company explained in a statement,“Specifically, blockchain-based trading can help remedy an overreliance on the United States dollar as a trade settlement currency, reduce excessive middlemen in the cross-border trading process, and eliminate inefficient paper-based processes. One offshoot would be that source countries retain more value for the foods they grow and more profits are returned to farmers and SMEs, who bear the brunt of commodity price shocks.”

The meetup which held at CcHub in Yaba,Lagos is one of such events that strives for inclusion of all sectors on the blockchain. With Barter Block, a blockchain-based cross-border agricultural trading platform Binkabi is developing, we can anticipate a world of fair trade system for people on the Binkabi network. The Barter Block system will allow its users  conduct physical commodity trading directly in a secure, cost-effective and decentralised manner using blockchain technology. 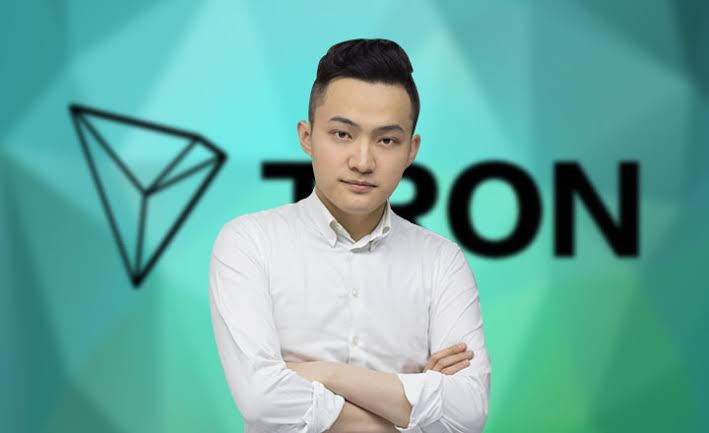 The founder of Tron Justin Sun and the Tron foundation has been sued by former employees for workplace aggression.

The lawsuit which was filed by last year in a 70 page document in the state of California by Richard Hall and Lukasz Juraszek revealed they have been victims of aggressive and hostile working environment.

The ex-employees are suing for $15 million in damages and government actions against claims of labour violations on the grounds of wrongful termination, discrimination, emotional distress and hostile work environment.

In the lawsuit, the plaintiff expressed undue pressure to deliver by fast-tracking the BitTorrent Software releases.

Lukasz Juraszek also claimed CEO of Tron, Justin Sun physically assaulted the Head of engineering however, there was apology issued for the assault.

Same Head of Engineering was also seen according to Lukasz Juraszek to have also hit a manager whom the former is known to always launch attacks at.

The 70-page document also showed some ethical issues with the management of the organization, specifically on the issue of copyright infringement.

Based on the report of the Court document, Richard Hall said he flagged some risk of third parties hosting copyright-infringement and child pornographic contents but CEO of Tron, gave little to no ears about the issue.

Lukasz Juraszek also claimed the manager physically assaulted by the Head of engineering, Cong Li told him that Cong Li appears to “hold him to impossibly high engineering standards”.

Not long after, he was kicked out of the company for reporting observation to human resources. According to the lawsuit, Lukasz Juraszek said after he was kicked out, an unknown user accessed his work computer from another location and his emails disappeared.

The plaintiffs also claimed Chinese nationals came from Mainland to replace both of them and other local nationals.

Justin Sun has been involved in several controversy over the life of his company starting from the plagiarism of the Tron Blockchain white paper and codes, to his involvement in pump and dump schemes as well as the postponement of his lunch with Warren Buffet.

The former employees are suing for $15 million. 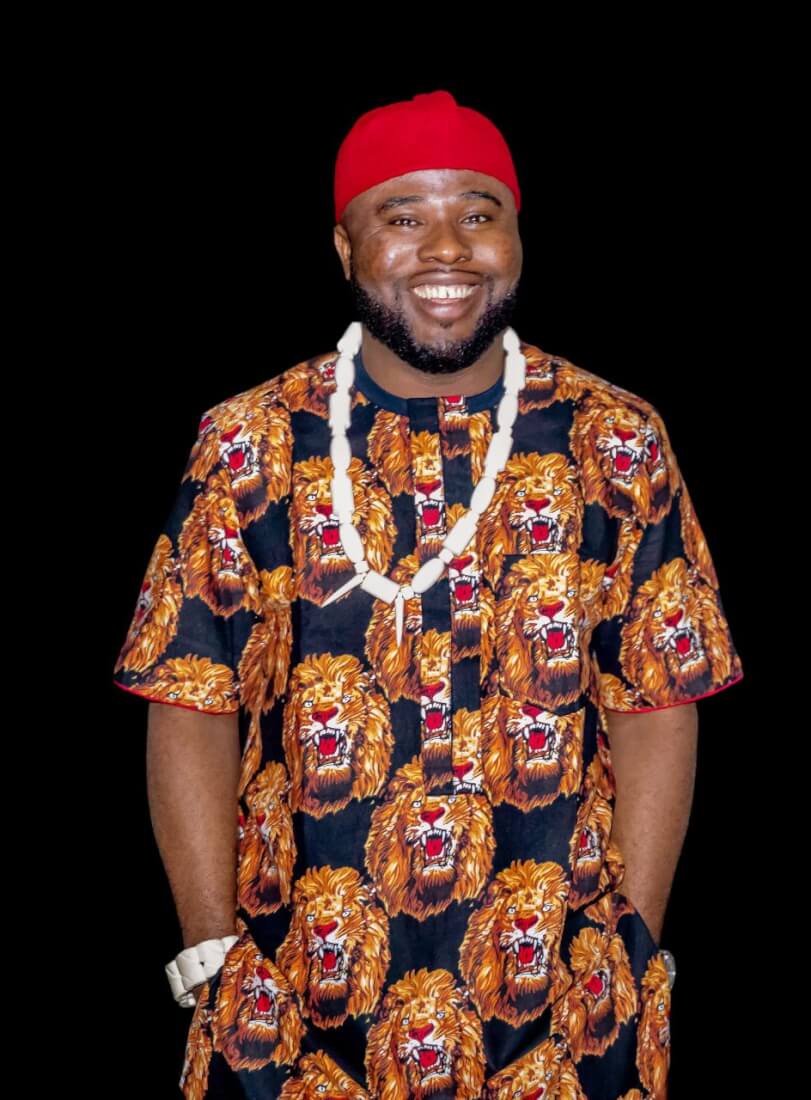 The rank which was posted by the vocal Bitcoin advocate and founder of AbitNetwork on instagram showed he ranked above 97.00% of other traders on Binance.

According to the same screenshot shared via his Instagram handle, the total volume of trades entered all through the year was 100% Spot Trade.

Another screenshot also shared by Mr. Gaius Chibueze also puts him at a total completed trade of 894 of which he only accessed his account 35 times all through the year 2019.

As one of the earliest Bitcoin investor in Africa, Bitcoin Chief as he is popularly known by many has over the years exploited his skills in training and exposing people all over the world, helping them to be self sufficient in the world of crypto trading. He continues to groom people while being vocal against fraudulent schemes which portray a false representation of what crypto is about.

The founder of ABiTnetwork, Gaius Chibueze, author of several books and tutor to thousands of people all over the globe in late 2019, through his company ABiT Network launched the ERC-20 Token, TATCOIN. TATCOIN is a utility token which is poised to be the next big thing.

Speaking on the reason for TATCOIN, CEO ABiTnetwork Mr. Gaius Chibueze said “at ABiTnetwork, we are always looking for smart solutions to prevailing issues in the economy,” In recognition of these issues in Africa, ABiTnetwork has leveraged on blockchain technology to provide solutions amongst which is the new cryptocurrency called the TATCOIN.”

Tatcoin will be utilized as the official transactional currency of the ABiT Network ecosystem. It will also be traded on cryptocurrency exchanges.

The token will serve to simplify payment processes for goods and services on the ABiT Network. It will be available to all users of the ABiT suite of products. Though it’s understandable that its utility may extend even beyond the ABIT suites of products.

Users using the token for payments on ABiT will also be entitled to discounts on purchases.

Over 4000 Complaints filed against Dunamiscoin, Directors to Appear before Court on Jan. 22

Over 4000 complaints has been filed against the organization  since the collapse of the money making scheme last December according to a report by the State Prosecutor. Directors of Dunamiscoins Resources limited is to appear before the court on the 22nd of January.

According to local media, the Observer, The Directors of the organization Mary Nabunya and Samson Lwanga were charged with 65 counts for obtaining money under false pretenses on appearance before the Court on Monday the 6th, January, 2020.

The Directors were accused of operating a fraudulent scheme which resulted in the loss of investment of hundreds of persons. The 65 counts  related to obtaining money by false pretense and conspiracy to commit felony was read to the accused by Senior Grade One Magistrate Roselyn Nsenge

Based on report from Observer, the Prosecutor told the court that between the period of February 14th and December 3, 2019 at the New Taxi Park in Kampala district, the two accused directors conspired to commit felony by obtaining money under false pretenses, an act that is against the Penal Code Act.

The accused obtained fraudulently over $2.5million from unsuspecting victims with the promise to provide return on investment of 30% at in 21days.

The suspects have pleaded not guilty to the charges brought against them they are to be remanded in Luzira prison till the next court day, 22nd January, 2020.

The suspects were arrested and have been in custody since the 10th of December after the collapse of the platform. Prior to the collapse of the money making sham, the organization grew in size such that it was able to set up shops in several places including Kampala, Masaka and Mbale.

Haruna Asiimwe, the lead complainant in an interview said victims were duped by the organization’s officials into investing money with the promise of earning a 30% interest in three weeks.  According to him, it came as a surprise when the company ended its operations on the 3rd of December.

However, the firm according to a statement from Uganda Police in 2019 revealed through its Directors that they are willing to refund the money but their major accounts in Centenary bank, Stanbic bank and GTBank are frozen by the authorities.

Abuja based tertiary institution, Nile University has partnered with the Cryptography Development Initiative in Nigeria (CDIN) to help equip students of the University with the necessary tools needed in the current digital age.

The MoU which was signed on the 15th of October, 2019 with the attendance of the Vice Chancellor of the University, Professor. Dr. Osman Nuri Aras and Mr. Adeolu Fadele, the President of CDIN.

Also present were other officials of the institution such as the Deputy Vice Chancellors Professor Steve Adeshina and Professor Nurettin Can. Others from other facilities were also present.

The partnership according to the Vice Chancellor of the University, Prof. Nuri Aras believed will help prepare the students of the University to face the digital world with the necessary tools.

Deputy Vice Chancellor – Admin, Professor Nurettin Can contributing said “the partnership with CDIN will provide the University’s students a wonderful opportunity to supplement their theoretical knowledge with valuable practical experience.”

President of CDIN Mr. Fadele Adeolu speaking on the partnership said Nile University has shown foresight in partnering with CDIN as not very many academic institutions appreciate the value of skills offered by the initiative.

“The Cryptography Development Initiative in Nigeria is a non-governmental organization and a platform for bringing stakeholders in Nigeria to work on a common interest of addressing gaps in cryptography.

According to its website CDIN envision Nigeria among nations of the world leading advancements in cryptographic innovations and breakthroughs.

It’s mission is to create a platform for encouraging the learning and practice of cryptography in Nigeria and collaboration among relevant stakeholders.