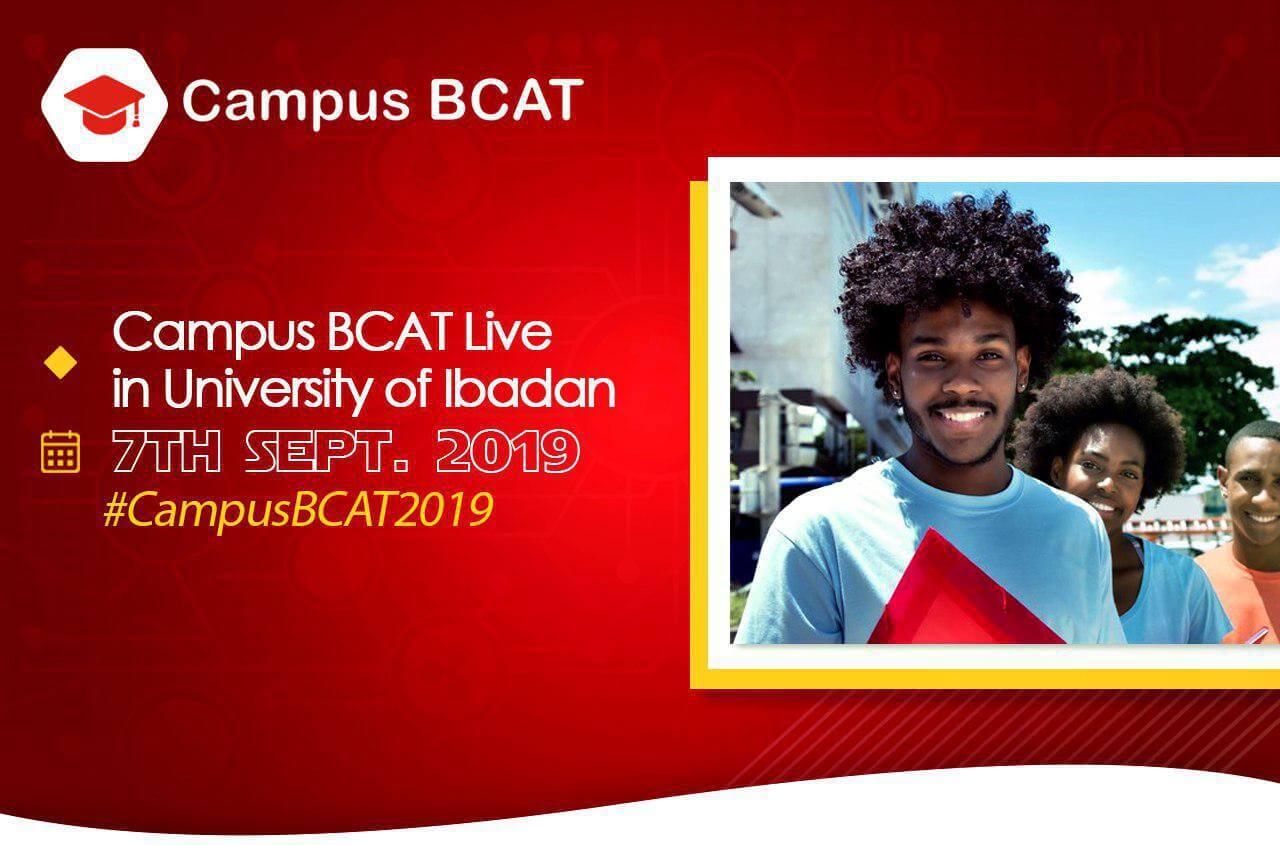 CampusBCAT2019 in University of Ibadan: The Largest Ever Blockchain & Cryptocurrency Event in Southwest Nigeria

CampusBCAT2019 which was held on the 7th of September 2019, at the prestigious University of Ibadan organized by CryptoTVPlus, the topmost Blockchain and Cryptocurrency media platform from Africa has officially set a new record as the most attended event in the southwestern part of Nigeria bothering around the Blockchain and Cryptocurrencies.
The maiden edition of an educational and advocacy movement about Blockchain and Cryptocurrency across Nigerian campuses held at the University of Ibadan, the premier university of Nigeria on the 7th of September where it saw myriads of blockchain enthusiasts trooping in from several parts of the country to participate in the kick-off of the much-awaited Tour expected to happen in at least five different but strategic Nigerian Universities across the nation.
As it was announced during a recent press release by CryptoTVPlus, CampusBCAT2019 seeks to launch Nigerian students into the already galloping fourth industrial revolution where the typical Nigerian student is not just a spectator but actively participating in the ongoing revolution either as an advocate or one who builds around the technology.
With a seeming disconnect between the youths in Nigeria and amazing founders both at home and in diaspora leveraging blockchain technology to offer innovative solutions that has noticeable impact on Nigerians, CampusBCAT2019 was born out of the need to bridge that gap.
The event was graced by reputable speakers such as Chinedu Obidiegwu, Marketing and Community Lead for Luno, Franklin Peters, Founder & CEO of Bitfxt Technologies and Tola Fadugbe, Founder of Crypto Masterclass who spoke on their respective topics where they educated the participants through the invaluable wealth of experience.
Gud Talent Igwe, CEO of Sumo Bank was also present as a speaker, Opakunle Omotayo, Africa Ambassador for Bitcore X, Toritseju Kaka, Founder of EmpowermEOS and Community Manager BOSCore, Chiagozie Iwu of Naijacrypto, Ophi Rume, better known as Cryptopreacher and Emmanuel Babalola, Secretary General of Stakeholders in Blockchain Technology Association of Nigeria, SiBAN equally had their chances of educating the keenly interested participants. 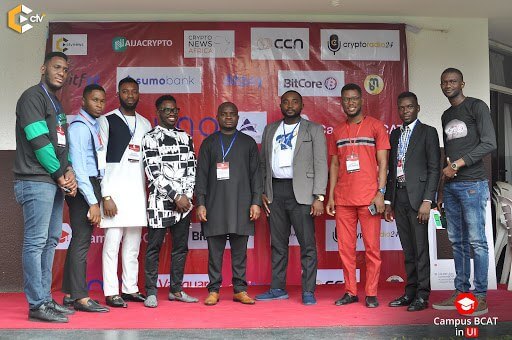 A Group Photo of the Guest Speakers

Students and other enthusiasts who were live at the event had the opportunity to network, participate in Q & A sessions and panel session where they engaged the guest speakers with burning questions that needed answers.

One of the Guest Speaker Educating the Students On Crypto

A UI student asking a question on Blockchain and Cryptocurrency

With a total event ticket of two thousands maxed out by participants who pre-registered for the event, the red carpet and event venue at the University of Ibadan was thronged by those who seek to gain entry and secure their seats in the hall.
The atmosphere on the event date was supercharged, students and participants had opportunities to win prizes such as free data top-up as given out by Franklin Peters, the CEO of Bitfxt demonstrating the practical use case of his newly launched BoundlessPay platform. Other prizes included free T-shirts, a laptop bag from Luno and also a star prize of a brand new smartphone awarded to a random winner by EmpowermEOS Foundation. 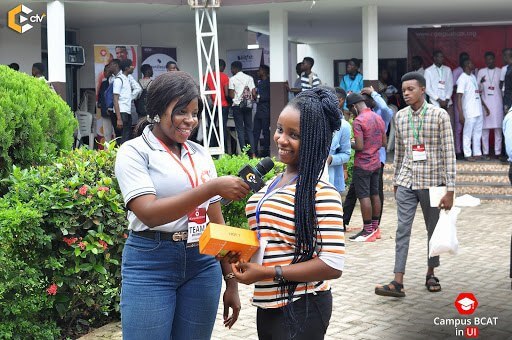 Naijacrypto also did an amazing giveaway program where it asked any participant to retweet using the signature hashtag of the program – #CampusBCAT2019 while also tagging its Twitter handle. The requirement was to get up to a thousand retweet within the shortest possible time for the winner to go home with one hundred and fifty dollars ($150).
This initially seemed difficult but was quickly achieved by the winner who rode on the already trending #CampusBCAT2019 across several social media networks to hit the mark.
The crowning point of the event was the inauguration of the very first BCAT Club at the University of Ibadan with its Caretaker Executive Committee announced.
The BCAT Club which is expected to be the legacy for any CampusBCAT event held in any of the Nigerian schools was established in UI while the portal for interested students of the universities was also opened for registration.

Tony Emeka, the Co-founder and CEO of CryptoTVPlus, the organizing convener of the CampusBCAT movement speaking on the event said:
“We are happy at what we see happening today. It is no longer a small dream but a national vision where our students are not told what is happening around pervasive technology such as the blockchain. A lot of the problems we see today in Nigeria can be solved using the blockchain technology and our Nigerian students must be ready to take the bull by the horns.”
“Enough of the wait on the government to start doing things right in our country Nigeria. As students who run departmental, faculty and SUG elections, you can actually demonstrate to the political class that the right thing is possible by conducting your leadership selection process using the blockchain because of its transparent and permanent nature. You can also create a departmental or faculty token which you can use for various important activities within the school. With this, we are sure a nascent technology such as the blockchain will no longer play a back-burner role but employed for greater societal gains” he said.

The BCAT Club established at the University of Ibadan as a result of CampusBCAT2019 event held there also exposed to the students to several other opportunities members stand to enjoy.
Victor Ugochukwu, the Chief Operations Officer at CryptoTVPlus who is also in charge of the planning and publicity of CampusBCAT2019 speaking at the inauguration of the BCAT Club UI Chapter said:
“This is the dawn of a new era for Nigerian students. I am a strong believer in the Nigerian dream and how uncannily talented Nigerian students can be if given the right environment and resources to explore. BCAT Club will offer our students the opportunity to interface with organizations building a project or two using the blockchain technology. From recruiting bright minds to offering internship positions or even leveraging the students interests in the blockchain technology to help push for the testing and adoption of their product solutions. While there are nonprofit merits such as conducting SUG elections and the likes on the blockchain as pushed forward by the university chapter of the BCAT Club, students can also reap invaluable monetizable benefits just by being a member of the club.
He continued by saying
“It is high time our successful Nigerian entrepreneurs who have carved out a niche for themselves on blockchain and cryptocurrencies started lecturing our students. Through BCAT Clubs scattered across each tertiary institution in the country, project leads and founders can come around to teach as visiting lecturers, sharing firsthand, invaluable knowledge to the students. This is one of the strides we hope to achieve, institutionalizing blockchain related courses in universities where project founders and leads teach these courses.”

With the euphoria of the event still enveloping the city of Ibadan, the CampusBCAT2019 train is already at full speed on its way to the University of Port Harcourt, Rivers State in Nigeria on the 24th of September. With anticipation building, CampusBCAT2019 in Uniport promises to be even bigger and hotter than what was experienced in UI.
CampusBCAT is expected to take place in Obafemi Awolowo University (OAU), University of Benin (Uniben) and Covenant University.
Related Topics:AwarenessBCAT ClubblockchainCampusBCATcampusBCAT2019cryptocurrencyEducationUiUniversity of Ibadan
Up Next

First of its Kind in Africa: SisiPower to Empower the ‘African Sisi’ with $1m Entrepreneurial Grants and 150m Anion Sanitary Pads to women and the less privileged girl-child in Africa