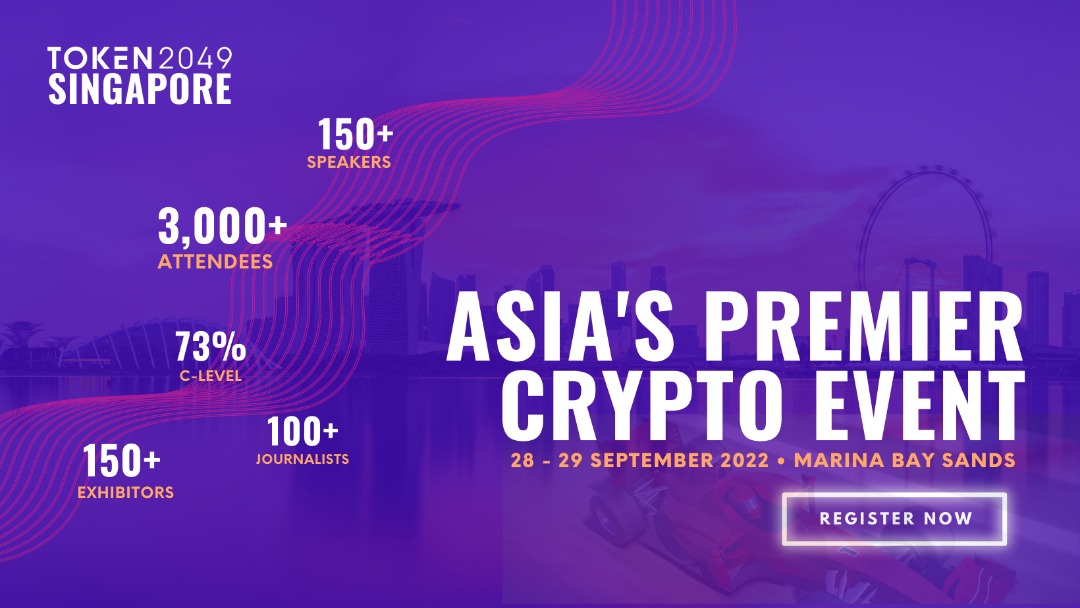 SINGAPORE — 8 July 2022 — TOKEN2049, Asia’s premier crypto conference, has announced a new batch of title sponsors and speakers for its upcoming Singapore edition which will be running from 28 to 29 September. This year marks the conference’s Singapore debut, making for a thrilling week of activities as some of the world’s most pioneering projects gather at what’s set to be the crypto industry’s first major in-person event in Asia ahead of the Formula 1 Singapore Grand Prix 2022 race weekend.

A notable addition to this year’s Title Sponsor lineup is a leading South Korean game company WEMADE, best known as the creator of leading MMORPG series Legend of Mir which sees over 120 million players worldwide. WEMADE has been servicing blockchain games since 2020, and currently 14 titles are onboarded on its platform WEMIX, including MIR4, the number 1 play-to-earn MMORPG.

A WEMADE spokesperson said: “With the industry growing at unprecedented levels and the amount of innovation it’s channeling globally, TOKEN2049 and the important conversations that it will catalyse couldn’t have come at a better time.”

As the flagship event of Asia Crypto Week, the conference is expected to draw 3,000 attendees from across the world. This year’s impressive line-up includes Stani Kulechov, Founder and CEO of AAVE, the leading open-source and non-custodial liquidity protocol; Haseeb Kureshi, Managing Partner of Dragonfly Capital; and Eli Ben-Sasson, Co-Founder and President of Starkware and co-inventor of zkSTARK, the privacy-preserving cryptographic proof.

Panels and keynotes at the event are set to address a broad agenda — from the evolving regulatory landscape and institutional investment trends to the rise of the metaverse, Web3, and what this will ultimately mean for the industry as mainstream awareness intensifies.

The Singapore event is set to be the largest in TOKEN2049’s history amid the token economy’s huge potential to transform industries and communities around the world. As a testament to growing interest among broader mainstream audiences, McLaren Racing Formula One driver Daniel Ricciardo, the new brand ambassador for world-leading crypto trading app and web3 platform OKX, will also be speaking at the conference ahead of Sunday’s Singapore Grand Prix 2022 race, sharing his views on digital assets and the evolving nature of fan engagement.

Commenting on the 200-sponsor milestone, Raphael Strauch, Founder of TOKEN2049 said: “The numbers don’t lie, and this overwhelming interest and energy only bode well for the industry. I’m thrilled to see the conversations and solutions that will emerge from Singapore this September.”

As part of Asia Crypto Week, attendees can expect to attend a full line-up of side events, including Pantera Blockchain Summit Asia, Milken Institute Asia Summit, and Algorand AVM Singapore, with many more to be announced in the coming weeks.